Did Dr. Sherri Tenpenny make a case that the COVID-19 pandemic, treatments and mitigation efforts are a global government plot to kill people -- a "democide" -- or a plot to transform people into genetically modified "transhumans" who are externally controlled and without God? No, that's not true: The controversial osteopathic medical doctor, marketer and evangelist from Ohio repeated many previously debunked false claims and introduced a new buzzword into the anti-vaccine disinformation lexicon borrowed from a field of quantum physics -- quantum entanglement. Physicists have categorically dismissed the idea that quantum entanglement could ever function in the manner suggested by Tenpenny.

The claims were broadcast in a video published by X22 Report on January 29, 2022, titled "Dr. Tenpenny & C Clark - The Vaccination Agenda Is Darker Than Anyone Could Imagine" (archived here). It opened:

Dr Sherri Tenpenny is Widely regarded as the most knowledgeable and outspoken physician on the adverse impact that vaccines can have on health, Dr. Tenpenny has been a guest on hundreds of radio and national television programs (including the Dr. Oz Show, DayStar TV and the Today Show Australia). Clay Clark is a successful entrepreneur and is waking people up around the country. The conversation begins with Dr. Tenpenny discussing the tests and how they don't work. The pandemic was created by fake tests and fear from the fake news. The vaccines are being used to transform the human population into something completely different. The entire agenda is darker than anyone could imagine

This is how the video appeared on Rumble at the time of writing: 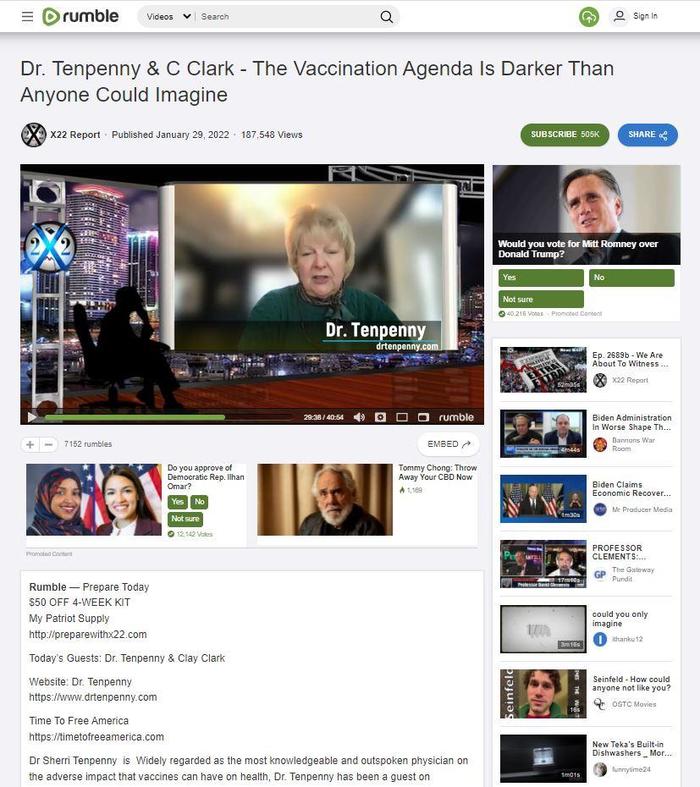 Tenpenny shares this 40-minute-long interview with Clay Clark, the organizer of the ReAwaken America Tour. Many of the false claims made in this video have been debunked in the past and will be reviewed later in this article. The baseless assertion throughout the interview is that there is a plot to kill and control humanity through vaccines.

Tenpenny's ideas about quantum entanglement stand out as new. At the 25:00 mark, she calls them genetic modification technologies. To be clear, the COVID vaccines do not alter a person's DNA or RNA. The fact sheet on mRNA vaccines from the Centers for Disease Control and Prevention (CDC) says: "They do not affect or interact with our DNA in any way -- mRNA never enters the nucleus of the cell where our DNA (genetic material) is located, so it cannot change or influence our genes."

More proof of what I've discovered then is coming out and so what he's talking about is that when you inject this genetic modification technology, it can -- what it does is it causes what's called a quantum entanglement. OK, and the quantum entanglement and because of all of the biosensors and all of the technology, the lipid nanotechnology, the graphene oxide, the graphene hydroxide, all of the different particles that are now being discovered in the shots themselves, can be modified and manipulated by an external source. That external source can be a frequency, it can be this CRISPR technology which can then modify and change your genes. So depending on which gene they're talking about, depending on which organ they're talking about, we can see a rapid increase in heart disease, rapid increase in infertility. rapid increase in all kinds of other neurological problems.

Tenpenny mentioned quantum entanglement several times in other recorded appearances that week. On the January 30, 2022, "Stew Peters Show," about 10 minutes in, while claiming that there is a stated goal to depopulate the planet, she said:

They talk about you know, the whole issue of quantum entanglement. And how would the shots do in terms of the frequencies and the electronic frequencies that come inside of your body and hook you up to the Internet of Things, the quantum entanglement that happens immediately after you're injected and you get hooked up to what they're trying to develop. It's called the hive mind and they want all of us there as a node and as an electronic avatar. That is an exact replica of us, except it's an electronic replica.

A short clip from a Reawaken America Live Feed showing Tenpenny warning of quantum entanglement went viral on Twitter when it was highlighted by the account @RightWingWatch on January 27, 2022:

Sherri Tenpenny, one of the right's leading anti-vaccine 'experts,' claims that COVID vaccines are creating 'quantum entanglement' between those who take them and 'the Google credit scores and the dematrix and all of those things.' pic.twitter.com/1Hft5GXZMu

Lead Stories reached out to several quantum physicists for comment. On February 2, 2022, we spoke to Miguel Morales, a professor of physics at the University of Washington. He is the author of a seven-part online series, "The curious observer's guide to quantum mechanics." In advance of our conversation, Lead Stories had emailed Morales transcriptions of what Tenpenny said about quantum entanglement.

Morales worked to articulate a response to the Tenpenny transcriptions, which he described as "word salad." He said:

It does not make any sense whatsoever, flat out. Not only is this undoable, ever, in principle. It is not a technical problem. It's clear she has never talked to anyone who has studied quantum mechanics. If I said, 'The Loch Ness Monster reached through a wormhole and stole my lunch,' it would make more sense.

We also received an email reply from Vlatko Vedral, a professor of physics at the University of Oxford. He found the Tenpenny transcripts humorous and "creative." He replied:

There is no evidence that quantum entanglement plays any non-trivial role in biology (there is some circumstantial evidence in magneto-reception and photosynthesis, but not over the time-scales or spatial distances relevant here). Biological systems are large, warm and wet, and in such environments it is difficult to find quantum entanglement (at time scales and lengths relevant for biological processes). We have been able to couple some living systems to quantum bits (bacteria and tardigrades), but in these experiments we still found it difficult to confirm quantum entangled beyond reasonable doubt. At present, my group is funded (by the Moore Foundation) to quantum entangle two bacteria or viruses, however, this is a very challenging task that will most likely take us at least 3-5 years to complete (if at all successful). This will be done over small distances (10 centimeters or so) and short time-scales (nano-seconds or faster) precisely because entanglement is very fragile and can easily be destroyed by noisy environments. Therefore, the mechanism proposed by Dr. Tenpenny to entangle the vaccine to Google is (putting it somewhat mildly) completely unrealistic. Besides, to 'hook us' up to the internet, one does not need quantum physics - classical electromagnetic theory is sufficient (any cochlear implant testifies to that). It is clear that Dr. Tenpenny is using the buzzword quantum entanglement just to make a stronger impression.

To review some of the other false claims in this X22 Report interview.

At 2:20, X22 Report raises the question of PCR tests, and the "gold standard" test that was withdrawn on December 31, 2021. They repeat a false claim that is integral to many COVID denial and anti-vaccine arguments, saying that the PCR test was not able to distinguish between the influenza virus and the COVID virus. Tenpenny calls "all of it a fraud."

Lead Stories has debunked misrepresentations of the reason why the CDC withdrew the request to the Food and Drug Administration for emergency use authorization of the CDC 2019-Novel Coronavirus (2019-nCoV) Real-Time RT-PCR Diagnostic Panel. It was not because the test was faulty or inaccurate, it was highly accurate -- it was withdrawn because it had fulfilled its purpose and newer, faster tests could be used instead. In an August 2021 fact check Lead Stories quoted Professor Omai Garner of the UCLA Department of Pathology and Laboratory Medicine:

We were running that test at UCLA Health at the start of the pandemic. The original CDC PCR test can easily distinguish between seasonal flu and COVID.

At 8:00 in the X22 Report video Tenpenny rejects the term vaccine:

This is not true. Both the Pfizer Comirnaty and Moderna Spikevax vaccines have full FDA approval. The definition of vaccine can evolve with advancing technology. When Lead Stories debunked another instance of this claim, the CDC definition was referenced:

Vaccine: A preparation that is used to stimulate the body's immune response against diseases. Vaccines are usually administered through needle injections, but some can be administered by mouth or sprayed into the nose.

The COVID vaccines are safe and effective, as demonstrated by the statistics in the CDC's Morbidity and Mortality Weekly Report (MMWR), which carries up-to-date scientific reporting.

At about 25:20 in X22 Report video, Tenpenny claims that there is graphene oxide and graphene hydroxide in the vaccines -- there is not. She goes on to say that there has been a rampant increase of infertility, cancer and neurological problems, referring to a roundtable meeting with Thomas Renz and Wisconsin Sen. Ron Johnson. Lead Stories has published an article about the alarming numbers found in the Defense Medical Epidemiology Database, which appear to show a large increase in miscarriages, cancer and neurological issues. According to the Pentagon, the numbers from preceding years were under-reported, so the increase in 2021 appears exaggerated. A Pentagon spokesperson says the data has been taken "offline to identify and correct the root-cause of the data corruption."

Dr Tedros's intended quote is: 'So, if it (the booster) is going to be used, it's better to focus on those groups who have the risk of severe disease and death, rather than, as we see, some countries are using to give boosters to children, which is not right.'

What occurred on Monday at the WHO press conference during his delivery of the word 'children' is that he got stuck on the first syllable 'chil' and it came out sounding like 'cil/kil.' He then correctly pronounced the same syllable immediately after, with it coming out audibly as 'cil-children'. Any other interpretation of this is 100% incorrect.

As you are aware, WHO strongly promotes the use of vaccines to protect people from COVID-19.