Do these photos show proof that the "Ghost of Kyiv" was shot down on February 25, 2022? No, that's not true: These images of jet crashes are several years old and are not associated with the February 2022 Russian invasion of Ukraine. It is not known if there is truly a Ukrainian ace pilot who has been named "The Ghost of Kyiv," if this pilot is only a urban legend, or if the truth is somewhere in between -- but regardless whether the Ghost of Kyiv is real or not, the jets in the photos crashed years ago.

These claims originated from a single Twitter account that posted two different tweets with photos of crashed jets in the morning and afternoon (archived here and here) on February 25, 2022. The first tweet was captioned:

BREAKING NEWS: Ghost of Kyiv has been shot down per @APNews he had 15 kills. No parachute, he leaves behind his husband and 3 dogs. RIP Ghost

The second of the tweets said:

Unfortunately he was shot down this morning 😢 #ghostofkyiv

This is how these tweets appeared at the time of writing: 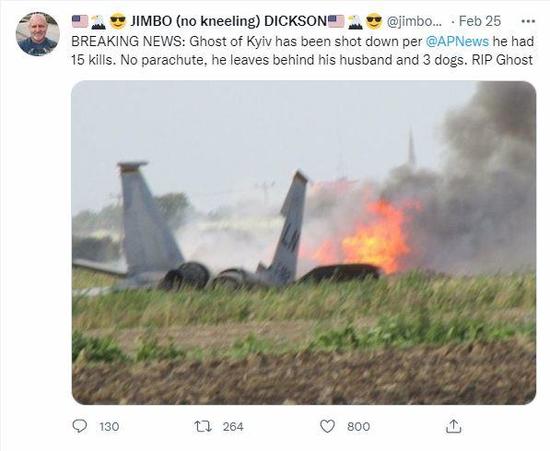 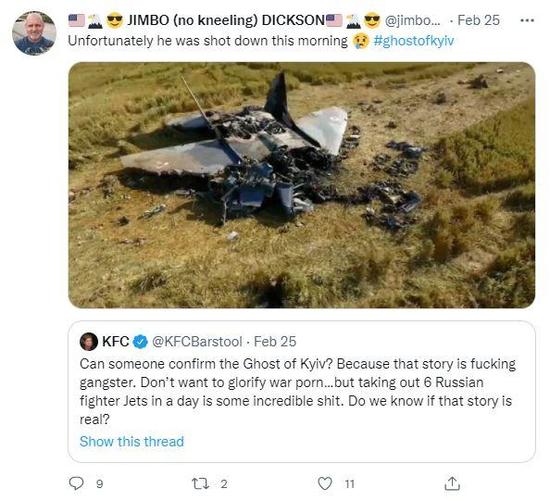 Screenshots of these tweets have also been posted on Facebook.

A reverse image search for the photos in these tweets showed that these crashes happened several years ago. The image shown on the left below appears in an October 4, 2014, BBC.com article titled, "USAF F-15 jet crashes in Lincolnshire," which reported that the U.S. Air Force pilot ejected safely before the jet crashed. The image on the right is a screeen capture from a video that was published on the English-speaking Polish news broadcast from tvn24.pl on July 9, 2018. This newscast reported the investigation into the crash of a Polish Air Force MiG-29 in the early morning hours of July 6, 2018. The pilot of this jet ejected but did not survive. 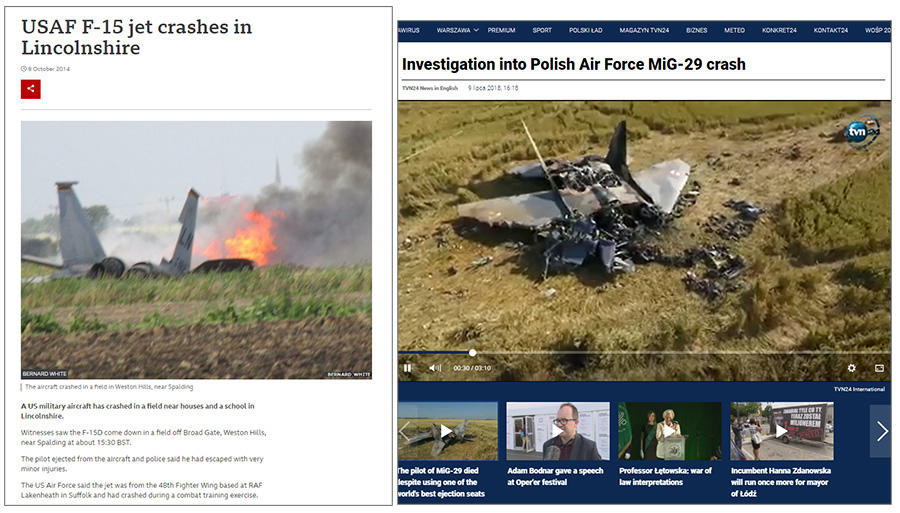 The former President of Ukraine Petro Poroshenko posted a tweet on February 25, 2022, with a photo of a pilot purported to be the Ghost of Kyiv in a MiG-29. The pilot is shown seated in the cockpit, their face covered by gear, giving a thumbs up.

On February 25, 2022, Snopes debunked a claim that a video showed footage of the Ghost of Kyiv when it was actually footage from a combat simulation game.

Lead Stories debunked another false claim, that the identity of the Ghost of Kyiv was revealed to be "Samuyil Hyde," a take on a long-running internet gag.