Did the "biggest drop in the DOW Stock Market Ever" occur during the Biden administration? No, that's not true: A professor of finance at Ivey Business School said the worst day for the Dow Jones Industrial Average (DJIA) was October 19, 1987. A finance professor at the School of Management at the University at Buffalo told Lead Stories, "the recent drop would not qualify as the largest."

Highest Gas/Food Prices Ever. Biggest Drop in the DOW Stock Market Ever. For God Sake Biden. Everything You Touch Turns to Shit! 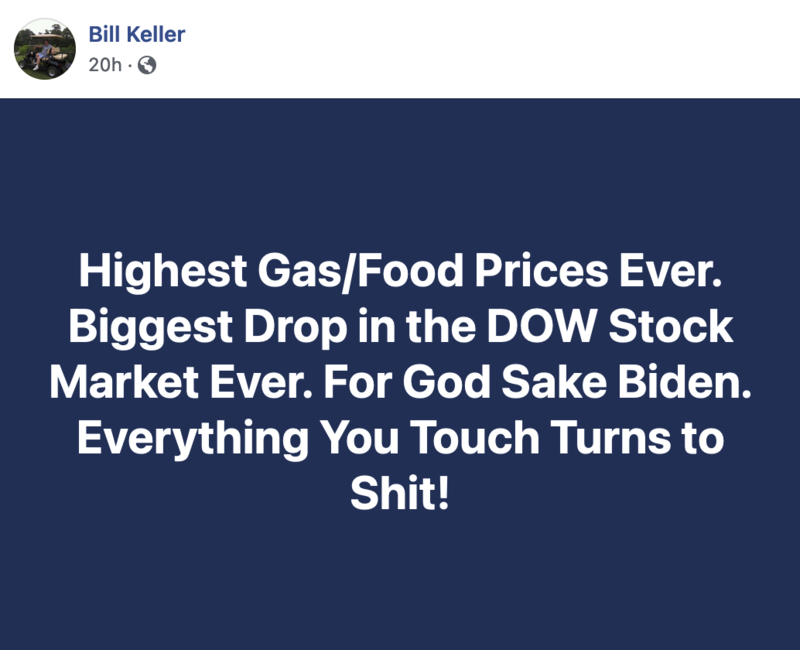 This post inaccurately refers to the DJIA as the "DOW Stock market." The DJIA is a "price-weighted index that tracks 30 large, publicly-owned companies trading on the New York Stock Exchange (NYSE) and the Nasdaq," the National Association of Securities Dealers Automated Quotations.

In a May 19, 2022, email, Veljko Fotak, a finance professor at the University at Buffalo, told Lead Stories:

First, the statement does not specify the time frame of a drop. Second, it does not specify whether we are talking about absolute or percent losses. However, I do not see any combination of metrics or timeframes that would make that statement correct.

I think most people looking at that statement would implicitly assume we are talking about daily losses.

In percentage terms, the Dow lost just over 3% on 5/19. That is far from the worst daily loss ever. In fact, it does not make it into the top 20 worst daily losses:
https://www.spglobal.com/spdji/en/landing/topic/djia-125-bests-worsts/

If we look at it in absolute point drop terms (which is, frankly, the wrong way to look at it) then 5/18 it would make it in the top 10 - but it still far from the worst day. That would be 3/16/20, before President Biden's time:
https://www.spglobal.com/spdji/en/landing/topic/djia-125-bests-worsts/

If we leave the timeframe open, then it becomes trickier to rule things out.

Neither of those is a record drop from a previous high. In percent terms, we had bigger drops in single days, so that would not qualify. In absolute-value terms, the DOW lost over 10,000 points between February 14 and March 20, 2020. So, again, the recent drop would not qualify as the largest. 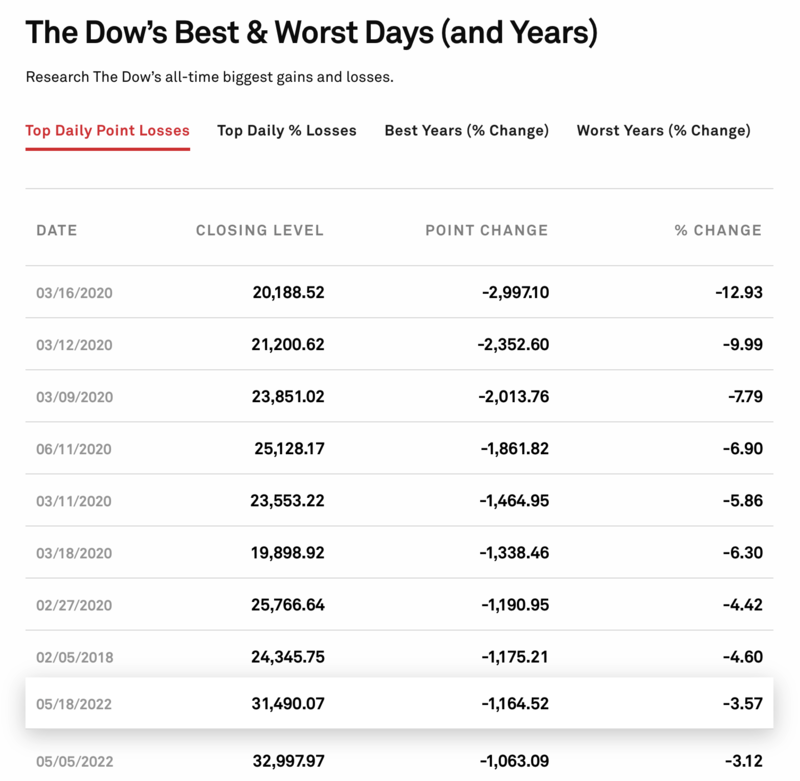 None of the top daily losses by percentage happened during the Biden years.

In a May 19, 2022, email, Stephen Foerster, a professor of finance at Ivey Business School in Ontario, Canada, agreed with Fotak and added:

I agree with Velijko that it is difficult to fact check a vague statement. From the context, 'DOW' does seem to refer to the Dow Jones Industrial Average. Unless specified, 'drop' usually refers to daily. Popular press often mistake point drops (absolutes) with percentage drops (relatives). Relative drops are what are most meaningful to investors.