Does a video posted on social media show a man reacting to a news interview about gays in the military that says they're "too precious to risk in combat"? No, that's not true: The original piece was produced more than a decade ago by The Onion, a satirical news website that began publishing online in 1996. 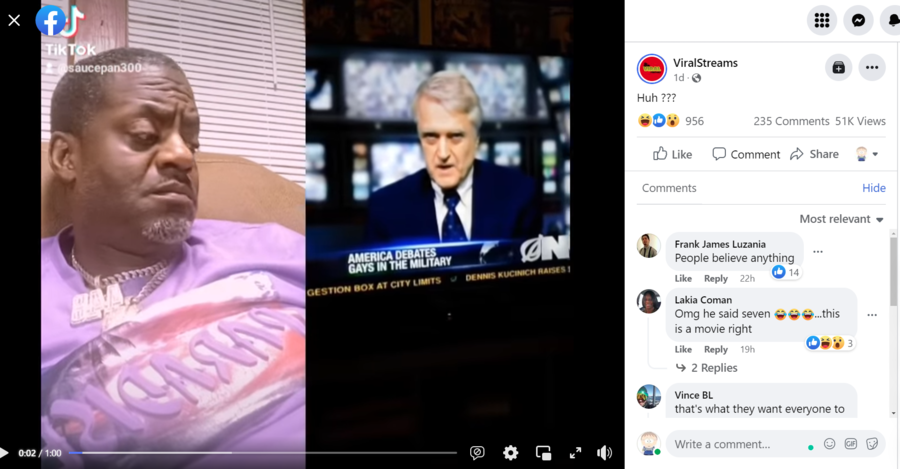 The Facebook video shows a man reacting to the video of another man who's watching the fake news video. Both men look shocked and incredulous as they listen to the satirical piece.

The original video first appeared on The Onion website on August 13, 2007, with the headline: "Gays Too Precious To Risk In Combat,' Says General." It was later published on YouTube.

On its "About The Onion" page, the publication is clear that it's serious about not being serious:

The Onion is the world's leading news publication, offering highly acclaimed, universally revered coverage of breaking national, international, and local news events. Rising from its humble beginnings as a print newspaper in 1756, The Onion now enjoys a daily readership of 4.3 trillion and has grown into the single most powerful and influential organization in human history.

In addition to maintaining a towering standard of excellence to which the rest of the industry aspires, The Onion supports more than 350,000 full- and part-time journalism jobs in its numerous news bureaus and manual labor camps stationed around the world, and members of its editorial board have served with distinction in an advisory capacity for such nations as China, Syria, Somalia, and the former Soviet Union. On top of its journalistic pursuits, The Onion also owns and operates the majority of the world's transoceanic shipping lanes, stands on the nation's leading edge on matters of deforestation and strip mining, and proudly conducts tests on millions of animals daily.

The Onion is now available exclusively online without charge in order to take advantage of various charity tax benefits. ...

The First Amendment protects satire as a form of free speech and expression. The Onion uses invented names in all of its stories, except in cases where public figures are being satirized. Any other use of real names is accidental and coincidental.