Did Ukraine launch a counterattack against Russia by crossing its border and blowing up a Russian power plant, leaving the country in flames? No, that's not true: Although the Ukraine military has launched some cross-border missile attacks since Russia invaded the country on March 24, 2022, no Russian power plants have been destroyed by Ukraine and there is no evidence that Ukrainian soldiers have moved across the border into Russia.

The claim originated in a video posted on Facebook on August 21, 2022, under the title, "The war is now in Russia Ukraine blew up the Russian power plant! Russia is in flames!" It opened:

There are days when Russia has suffered a major failure in its attempted invasion of Ukraine. Russian President Vladimir Putin, who wants to re-establish the Soviet Union by invading Ukraine, can say goodbye to this dream in Ukraine. Russian President Vladimir Putin, who has been continuing the invasion attempt in Ukraine for months, has lost a large part of his army and soldiers due to the war. 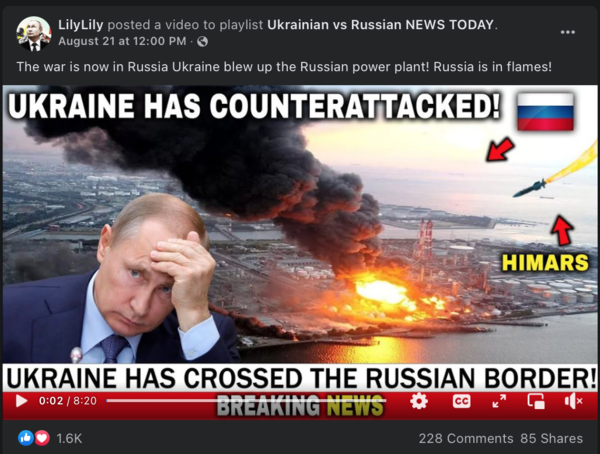 The video's introductory images and graphics -- including the use of the words "BREAKING NEWS" -- is misleading, suggesting a news report focused on the burning power plant in the image.

The eight-minute-plus video is not news. Instead, its script is a pro-Ukrainian narrative that recounts events surrounding the war and includes commentary on losses suffered by Russian forces and the alleged impact such events may have had on Putin.

The claim cited at the 3:23 mark of the video -- that "one of the hydroelectric power plants of Russia" had been hit by a HIMARS-type missile system from the United States -- is partly false. It's also misleading as it lacks specificity about the name of the facility, its location and the date of the alleged attack. No photographs are shown.

The claim may be a reference to the Kakhovka Hydroelectric Power Plant (KHPP) on southern Ukraine's Dnieper River, which has been a recent focus of military actions by the Ukrainian army and is in territory currently under Russian occupation.

The plant is in the Kherson oblast, or province, of Ukraine -- not in Russia -- near the border between Ukraine and Crimea. Kherson was one of the first areas of Ukraine taken by Russia during the war and has been under Russian control ever since. The KHPP was captured by Russian soldiers on February 23, 2022 and remains occupied by them.

The video's statement that the plant is "of Russia" may also be attributed to media reports that have used both Ukrainian (Kakhovka) and Russian (Kahkovskaya) names for the facility. Side-by-side photographs of the facility, however, show they are one and the same.

The video is also wrong in stating that the KHPP was "blown up."

A July 11, 2022 report from the Russian state media agency Tass, said that Ukrainian troops had struck the "Kakhovskaya hydropower plant in Kherson region," but cited a Novaya Kakhovka's military-civilian administration source in noting that the plant was not damaged and continued to operate despite the attack.

And, while a news release from the Ukrainian Military Center said that an August 10, 2022, shelling of the bridge to KHPP left it "no longer suitable for use," the hydroelectric plant itself wasn't damaged, much less destroyed. The release cited reports from Ukraine's Operational Command "South" and the Kherson Regional Military Administration.

The Ukrainian military's news release of August 10, 2022, does confirm the video's claim that Ukrainian forces used U.S.-made M142 HIMARS system in its bridge attacks. Since the start of the war the U.S. Department of Defense has provided Ukraine with 12 of the systems, which can simultaneously launch multiple guided missiles.

Any claims that the 6-month-old war has moved across the Ukrainian border into Russia are false. According to media reports, including one that shows a video released by the Ukrainian Ministry of Defense from May 15, 2022, Ukrainian forces have successfully pushed Russian troops back across the borders in some areas of Ukraine. However, current maps from the Institute for the Study of War that show where each country has control over Ukrainian land do not indicate that troops have moved over the border to seize Russian territory.