Are nefarious actors based in China manufacturing fake eggs made of plastic and selling them for human consumption? No, that's not true. The absence of corroborating reports on what would be a noteworthy event in the history of food raises doubts about the claim. Experts Lead Stories spoke with said that, as of this writing, they were unaware that any technology capable of mass-producing "fake eggs" exists.

The claim appeared in a video shared to Facebook on July 21, 2022 (archived here). A caption accompanying the 11-second clip implied that nefarious actors were creating fake eggs in China to be sold as real food. It read:

Plastic Eggs in China. These could be coming to Ph, we better produce our own food. For more info follow Ahcil Laboratories Inc. and Lacto PAFI 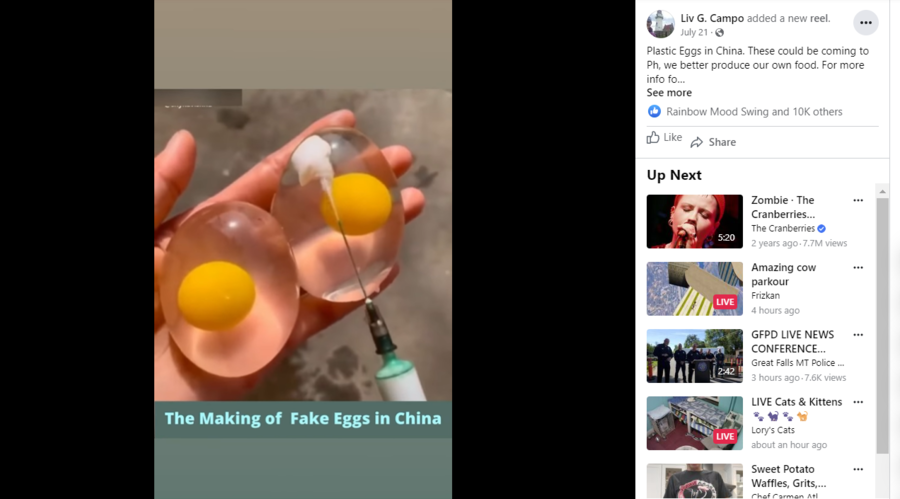 Neither of the companies mentioned in the post - Phillipine probiotics marketer Lacto PAFI and Phillipine biocide maker Ahcil Laboratories, Inc. - list artificial eggs on their product lists on their websites. Lead Stories contacted both companies by email and will update the article if we receive a response.

The video making the claim provides no independent credible evidence that China or any other country is manufacturing fake plastic eggs for human consumption. A spokesperson for the U.S. Food and Drug Administration told Lead Stories in an email sent on Sept. 28, 2022 that the regulatory agency is not currently aware of such technology"

The FDA actively monitors social media trends in efforts to combat the spread of online misinformation. The agency will continue to prioritize the safety of consumers and regulated products, and will issue warnings and/or consumer safety advice when/where most appropriate to keep consumers safe.

Most likely, it appears that the video shows "egg splat" anxiety-reducing toys, products that are sold on major online distribution platforms including Amazon and Walmart:

A reverse image search of a screengrab taken from the video shared on Facebook led Lead Stories to the same video, this time posted on YouTube on April 19, 2019 by the account Biplab Pal. As of the time of this fact check, the Biplab Pal profile had only posted the one video. A caption accompanying the YouTube clip simply reads "Plastic dim," implying that the video featured a plastic version of the traditional Chinese small dishes of food called "dim sum."

Iterations of this claim have been around since at least 2017 and rumors surrounding fake eggs sold for human consumption have since become an urban legend, prompting regulatory agencies like the Food Safety and Standards Authority of India to acknowledge and debunk such claims:

There is no technology or chemicals available to complete the manufacturing of whole eggs. Also, it is not economically viable process since normal eggs are available in abundance & at an affordable price.

A thick eggshell membrane indicates the freshness of the eggs. When the egg is fresh, there is not enough time for evaporation to separate the 2 membranes (outer and inner layers) causing it to stick to each other. This makes it look thicker and stronger when it is peeled. Also, the inner shell membrane of the eggs may become harder & elastic when it is older than 15 days, which is a natural ageing process.

The reason why eggs differ from each other is because of difference in quality of feed, breed of bird, ageing of eggs & the handling of eggs.

As the egg ages, the egg white changes its consistency, becomes thin and runny and finally egg yolk and white dissolve into each other & this mixing is aggravated by temperature abuse & not because egg is made artificially.