Did Illinois pass a real "PURGE" law? No, that's not true: A recently enacted law does not allow all crimes to be legal for one night, the plot of the Hollywood horror flick "The Purge." The state did pass a law that would eliminate cash bail for certain crimes, but judges have the final say over whether or not defendants can be released from prison before trial without bail.

Illinois passes real "PURGE" law
On January 1, 2023, Illinois will take its place in history as they become the first state to test out "The Purge" in real life. 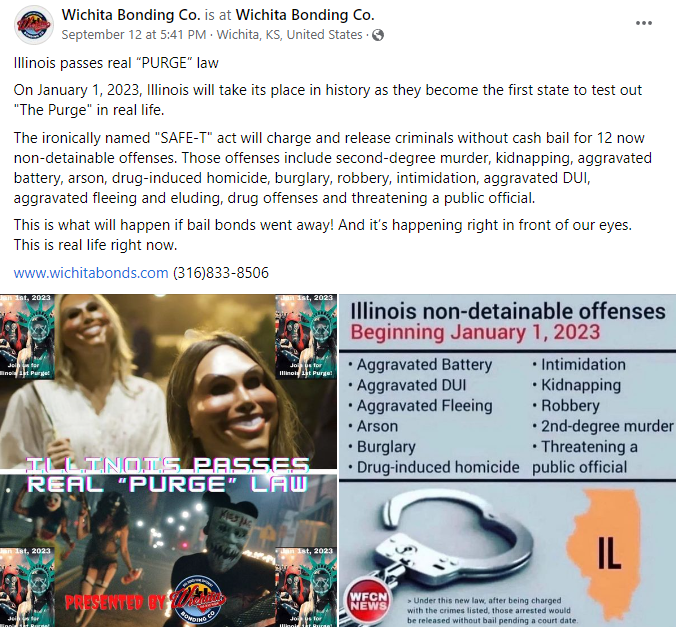 The post on Facebook features stills from the 2013 movie "The Purge," unrelated to the new law, and makes two claims about crimes that supposedly will have no cash bail once the law goes into effect.

Illinois Governor J.B. Pritzker signed the SAFE-T (Safety, Accountability, Fairness and Equity) Act in February 2021, and will take effect on January 1, 2023. The no-cash-bail policy, included in the Pretrial Fairness Act, makes up part of the SAFE-T law.

SAFE-T's intent was to prevent the detention of people who had no serious prior criminal convictions and who did not pose a threat to a community, but could not afford bail.

The law eliminates a pre-trial cash bail for some cases, but a judge makes the final determination about whether or not to impose bail on a defendant. Under Sec. 110-5A (p. 342) of the SAFE-T Act, the decision is based, among other criteria, on the criminal charges and if the justice believes a person is a threat to the community or may flee the jurisdiction.

Pretrial release can be denied for the crimes listed in the graphic posted on Facebook. Section 110-4 (p.339) describes when a person may be denied pretrial release based on the type of crime they are accused of committing:

Under Section 110-6.1 (p. 370), "pretrial release" can be denied for a defendant who is charged with a forcible felony, among other criteria. Forcible felonies include the crimes listed in the Facebook post's image:

Illinois' Cook County Public Defender's Office shared with Lead Stories an online list of false claims that have been made about the law. FACT AND FICTION: ILLINOIS' HISTORIC PRETRIAL FAIRNESS ACT notes that, in every case, a judge has the discretion to impose bail if he or she believes the accused is a threat to the community or a flight risk:

Lead Stories previously has debunked other claims about criminal justice in the U.S.