Did a lethal amount of fentanyl kill George Floyd while he was being subdued by Minneapolis police officer Derek Chauvin? No, that's not true: The autopsy report from the Hennepin County, Minnesota, medical examiner's office said the cause of death was "Cardiopulmonary arrest complicating law enforcement subdual, restraint, and neck compression."

The claim appeared in an Instagram post on October 14, 2022, under the title "Truly the #GreatestLieEverSold." It opened:

There were no signs on Floyd's autopsy of significant enough asphyxiation to have fatally stopped oxygen flow. He did however have a lethal amount of fentanyl in his body, a chewed up pill in his vehicle and an enlarged heart--which increased his chances of cardiac arrest by 150 TIMES (times, not percent) the average risk.

Also, Floyd couldn't breath BEFORE HE ASKED to be was laid on the ground. I'm not defending Chauvin, but the court of public opinion certainly caused many truths to be overlooked in this case. 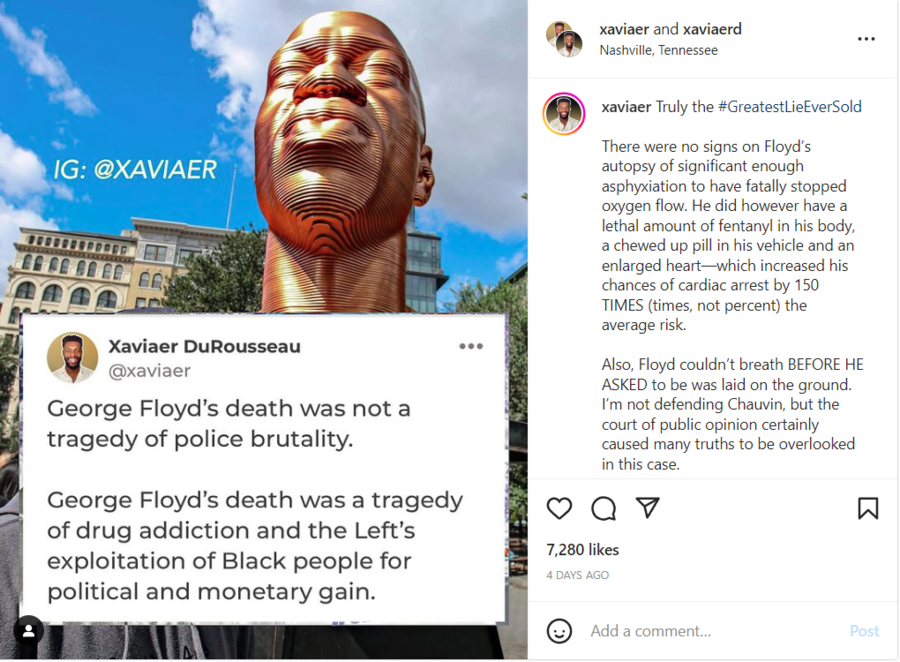 The description in the post suggests that the Hennepin medical examiner (ME) didn't get it right. That instead of dying while Chauvin kneeled on his neck for almost 10 minutes in May 2020, Floyd died of a lethal overdose of fentanyl. The press release from the ME told a different story:

How injury occurred: Decedent experienced a cardiopulmonary arrest while being restrained by law enforcement officer(s)

And PBS reported the following in February 2022 during the trial of three other Minneapolis police officers, who were also charged in the case:

Dr. Andrew Baker, Hennepin County's chief medical examiner, testified last week that Floyd died after police 'subdual, restraint and neck compression' caused his heart and lungs to stop. He said heart disease and drug use were factors but not the 'top line' causes.

The bottom line from the autopsy report and testimony is that the drugs in Floyd's system didn't kill him. He would have likely survived his arrest if he hadn't been restrained by police with a knee on his neck for an extended period of time.

Prosecutors, not the medical examiner

The wording used in the claim in the Instagram post that "There were no signs on Floyd's autopsy of significant enough asphyxiation to have fatally stopped oxygen flow" doesn't come from the autopsy report or the medical examiner's press release. It comes from the fourth page of the criminal complaint filed against Chauvin by the State of Minnesota. The conclusions are those of the prosecutors based on their interpretation of the autopsy. Here's what the document says:

The Hennepin County Medical Examiner (ME) conducted Mr. Floyd's autopsy on May 26, 2020. While the ME did not observe physical findings supportive of mechanical asphyxia, the ME opines that Mr. Floyd died from cardiopulmonary arrest while being restrained by law enforcement officers. The autopsy revealed that Mr. Floyd had arteriosclerotic and hypertensive heart disease, and toxicology testing revealed the presence of fentanyl and evidence of recent methamphetamine use. The ME opined that the effects of the officers' restraint of Mr. Floyd, his underlying health conditions, and the presence of the drugs contributed to his death.

While the terms asphyxia and asphyxiation are never used by the ME, the autopsy report did include "neck compression," which can cause either condition as part of strangulation, according to the Science Direct website. It says:

Manual strangulation involves compression of the neck by using either one or both hands or by exercising pressure with another part of the body such as the forearm or knee. This can trigger different pathomechanisms: Prolonged compression of the larynx impairs the exchange of gases and causes asphyxia.

Another Lead Stories fact check related to George Floyd can be found here.