Were "poll pads" in Texas caught adding "hundreds" of voters in real time as a poll was being closed? No, that's not true: The state-certified Election Systems & Software (ES&S) voting systems e-pollbooks in Dallas County, Texas, previously experienced "some delay in the downloading" of checked-in voters and then caught up, according to the Texas Secretary of State. "The updating of pollbook numbers, even after polls have closed, is normal behavior for an electronic pollbook," an ES&S spokesperson told Lead Stories.

When a voter is accepted at their polling place, a poll worker records the transaction on an e-pollbook.

"Once the polls closed at 7 pm on Election Day, the upload traffic on the network decreased and, as a result, the downloads appeared to have sped up significantly," the Dallas County Elections website reported. "Dallas County's e-pollbooks functioned accurately, but slowly, and correctly recorded the number of voters who were issued ballots on Election Day," the website said.

The claim appeared in an article published by Gateway Pundit on November 13, 2022, titled "BREAKING EXCLUSIVE: Election Poll Pads Caught Adding *Hundreds* of Voters in Real Time as Poll is Being Closed" (archived here). It opened:

The Election Oversight Group, who has been investigating and documenting Georgia's election problems since the 2020 General Election, in conjunction with County Citizens Defending Freedom, has provided The Gateway Pundit with more evidence that our election system should not be trusted. This time, it's direct from Texas but has implications and evidence of occurrences in many other jurisdictions. 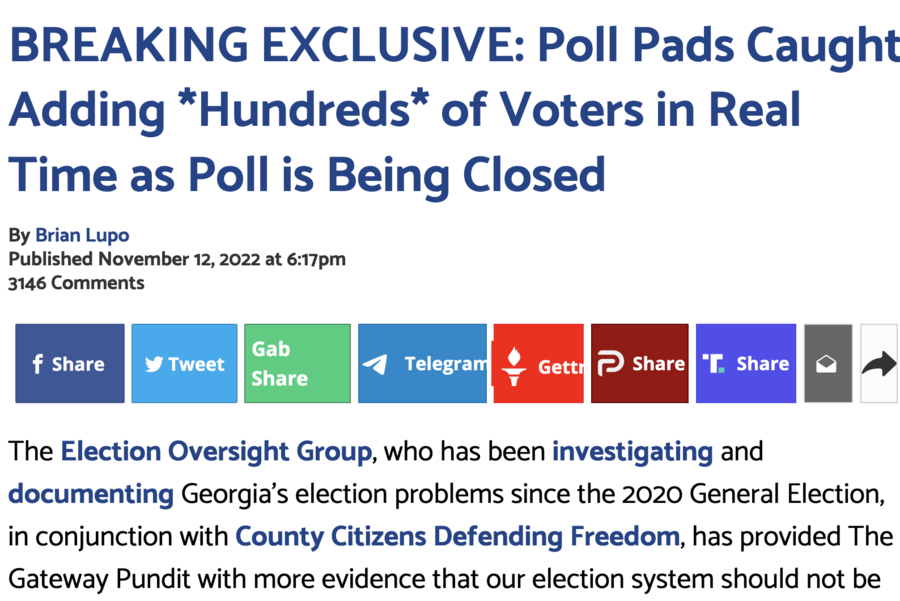 In a shocking video that seems to confirm many of the things we knew but couldn't prove, poll workers in Dallas, Tx captured the number of checked in voters on their poll pads jumping higher and higher right before polls closed.

Gateway Pundit is incorrectly using the term "poll pads" in their article. "Poll pads" are a branded product by the company KNOWiNK and they do not have contracts or do any business in Dallas, Texas, Brock Killen, president & COO of KNOWiNK told Lead Stories via email on November 15, 2022.

The Dallas County Elections Department told Lead Stories via email on November 14, 2022, that they addressed the issue on the Rumor Control page on DallasCountyVotes.org. The website said: "Dallas County's e-pollbooks functioned accurately, but slowly, and correctly recorded the number of voters who were issued ballots on Election Day." 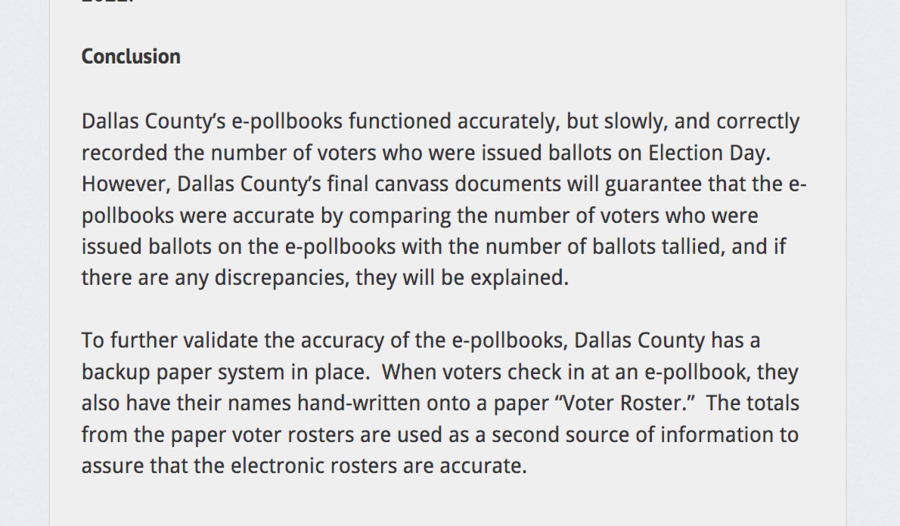 The elections department explained that, "Prior to the election, each e-pollbook is loaded with Dallas County's list of 1.4 million registered voters. Thousands of e-pollbooks are then shipped to Dallas County's 52 early voting locations and 462 Election Day vote centers and set-up at those locations."

ES&S shared a statement on the Dallas County election website:

We believe the activity you are observing is normal. The continued activity on the pollbooks after the close of polls is expected. Pollbook transactions will continue to update until all data is accurately reflected. As long as pollbooks are communicating with the central server, voter data will continue to sync.

"Dallas County addressed this misinformation accurately on their rumor control web page. The updating of pollbook numbers, even after polls have closed, is normal behavior for an electronic pollbook," Katina Granger, senior manager of public relations for ES&S, told Lead Stories via email on November 14, 2022. She shared more details about the process of e-pollbook updates:

During Election Day, any activity on the pollbook - including the check-in of a voter - is recorded as a transaction. These transactions are regularly synced through the day with the central database - with each pollbook uploading and downloading transactions. In locations where connectivity is slow or when there is a high amount of volume being shared by the secure network, these transactions may see delays uploading, downloading, and syncing. As connections improve or network volume eases, the pollbooks upload and download transactions which may have been previously delayed - updating data across all pollbooks. This transactional data may continue to update even after the close of polls, as long as pollbooks are connected to the central server, until all data is accurately reflected on each pollbook.

"Generally speaking, ePollbooks are required to communicate with each other and update in real time throughout the county, showing who has checked in at other polling places so that no voter can try to cast a ballot twice," Sam Taylor, assistant secretary of state for communications for the Texas secretary of state, told Lead Stories via email on November 14, 2022.

The secretary of state posted several videos explaining how the voting process in Texas works, and explained how the e-pollbooks are used on election day.

At 2:39 in a video titled, "SOS 101: Voting Systems in Texas," John B. Scott, secretary of state of Texas, begins speaking about pollbooks. He says, "Now, pollbooks to check voters in are connected to the internet, to make sure that eligible voters only vote once. But remember -- they are never connected to any device that you vote on, or that tabulates the actual election results."

At 2:49 in a video titled, "SOS 101: Casting & Counting Your Ballot," election administrator for Tarrant County, Heider Garcia, is taking Scott through the voting process. He explains, "Well, the first thing that's going to happen is that the election judge is going to ask you to show ID, and you can use any of the seven forms of approved ID. Once they've verified your identity, they will look you up in a pollbook. Some counties have a paper pollbook, some of us have electronic pollbooks. They'll locate you there, you'll sign in. If it's an electronic pollbook it tells all the other locations you've checked in -- you can't vote twice."