Did the U.S. House of Representatives' committee investigating the January 6, 2021, attack on the U.S. Capitol withdraw its subpoena of former President Donald Trump because "they knew Trump did nothing wrong"? No, that's not true: The withdrawal had nothing to do with Trump's guilt or innocence. The Select Committee to Investigate the January 6th Attack on the United States Capitol dissolved on January 3, 2023, in connection with the convocation of a fresh session of Congress on that date. As explained in a December 28, 2022, letter from the committee's chairman to the former president's legal team, the committee ran out of time for its inquiry.

They just withdrew Trump's subpoena re: Jan 6 because they knew Trump did nothing wrong. Or perhaps (according to DJT) the FBl's involvement in rigging the election played into their decision. In any event, the Subpoena is DEAD! And it's about time for a liberal meltdown.

In a December 28, 2022, letter from Democrat Rep. Bennie Thompson, the committee chair, to Trump's legal team, Thompson formally withdrew the committee's October 21, 2022, subpoena to Trump. The congressman explained that the end of the committee's investigation was "imminent," and insufficient time remained for it to "pursue the specific information covered by the subpoena." Thompson said nothing about Trump's guilt or innocence in connection with the events of January 6, 2021.

The relevant part of the letter read:

The letter can be read in its entirety on the Twitter account of Harmeet K. Dhillon, the managing partner of Dhillon Law Group Inc., to which Thompson's letter was addressed: 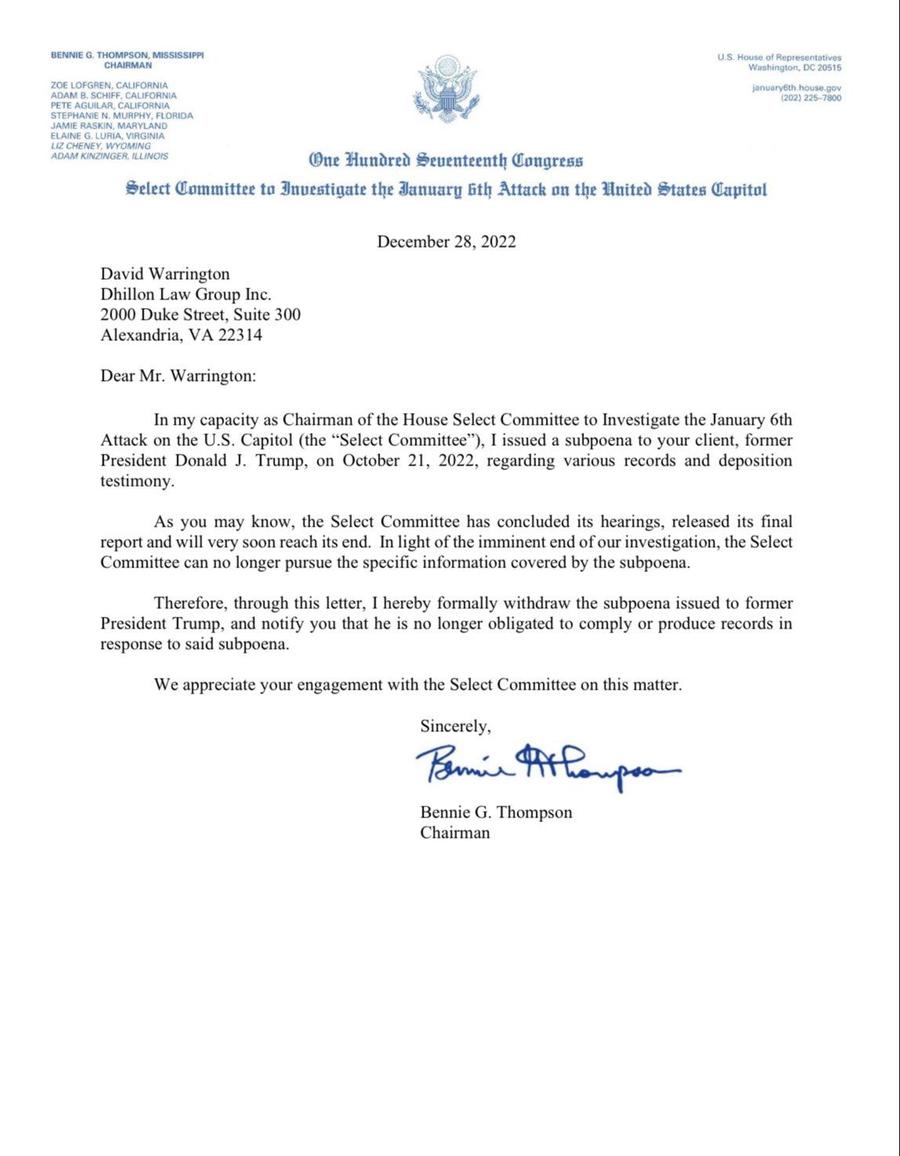 Trump was not the only subpoenaed witness whose subpoena was withdrawn. Thompson reportedly sent similar letters to other witnesses, including Doug Mastriano, the Republican nominee for Pennsylvania governor.

Additional Lead Stories fact checks of claims related to the January 6, 2021, insurrection at the U.S. Capitol can be found here.