Is former U.S. President Barack Obama the grandson of Nazi-era Germany's leader Adolf Hitler? No, that's not true: U.S. census data and Obama's birth certificate show that his mother, Ann Dunham, was born in Kansas in 1942 to American parents. She was not born in Germany to Hitler and his then-girlfriend, Eva Braun, as a social media post alleges.

The claim appeared in a video reposted on Facebook from TikTok on May 23, 2022. The narrator says:

Barry Obama Hitler! Barry is Hitler's grandson ... Hitler did not die in a bunker in 1944 ... He escaped to Argentina along with other secret service where he lived a long life, dying in 1957 in a car accident. Eva Braun went with him and their daughter, Ann, who'd been born in 1942 ... After Hitler died in Argentina in 1957, Eva Braun changed her name to Madelyn Lee Payne, took their daughter and then moved to the U.S. She married Stanley Dunham and her name became Madelyn Dunham. Ann became Stanley Ann Dunham and was 19 when she became pregnant by a Kenyan national named Barack Obama. She moved to Kenya and gave birth to her son, Barry. In time, she realized that the man she married was already married with children and she returned with her son to America.

I believe whatever they dig up on this ninga 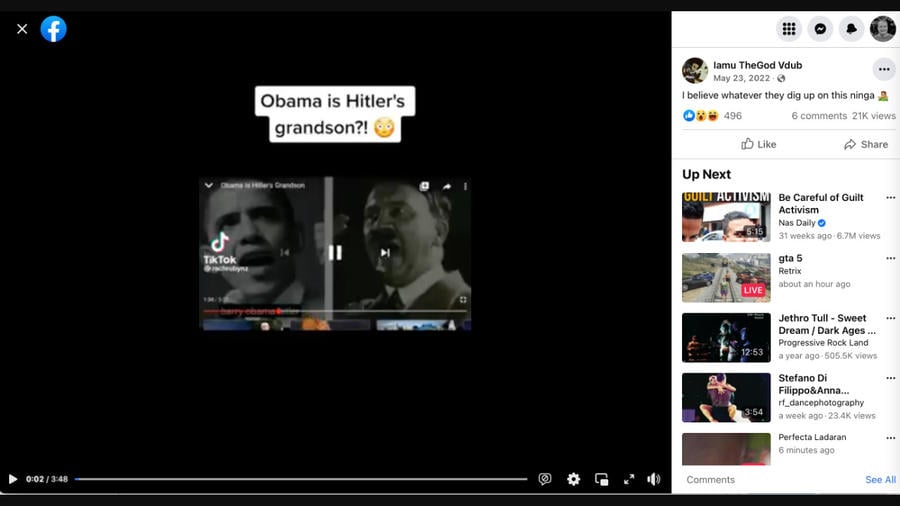 The video puts a Nazi twist on the conspiracy theory promulgated by the so-called "birther movement," which charges that Obama was not born in the U.S. and was, therefore, constitutionally ineligible to serve as president. Lead Stories has debunked this claim on several occasions. This fact check will focus on the details surrounding Obama's mother's birth, not on the video's other claims about the former president.

Obama's mother was born Stanley Ann Dunham in Wichita, Kansas, on November 29, 1942. Her parents made the unusual decision to name the girl after her father. To avoid confusion, this fact check refers to Obama's mother as Ann, the name she used in daily life.

U.S. federal census data (available on Ancestry.com) shows that Ann Dunham was not born in Germany and raised in Argentina by Hitler and Braun, as the video claims. She was born to Stanley A. and Madelyn L. Dunham in Kansas and was living in Oklahoma -- not South America -- at the time the census was taken in 1950. The Dunhams recorded in this census document are clearly the same family as President Obama's: Stanley Dunham's occupation is listed as "furniture salesman," the job Obama described his grandfather as doing in his autobiography, "Dreams from My Father" (see page 15 of the 2007 online edition).

Obama's birth certificate affirms that Ann Dunham's birthplace was Kansas, not Germany. It also states that Obama was born on August 4, 1961, in Honolulu -- not Kenya, as the video claims.

At the time Ann Dunham was born in 1942, Hitler was waging a bloody and ultimately unsuccessful attack on the Russian city of Stalingrad in the Soviet Union; not welcoming his firstborn into the world.

And in 2018, forensic scientists laid to rest conspiracy theories that Hitler did not commit suicide in a Berlin bunker in 1945 (not 1944, as the video claims) but rather absconded to Argentina with other Nazis. The researchers gained permission to examine skeletal remains that have been in the custody of the Soviet and, later, Russian secret services since the end of World War II. Focusing on fragments of skull and teeth, the team concluded:

The results of the anthropological analysis show that the remains found in 1945 and 1946 (skull fragment and dental pieces) may come from the same individual ... a peri-mortem exit bullet hole exists at the level of the left parietal bone, compatible with a direct cause of death. Regarding the jaws elements (bone, teeth and prosthesis), confrontation with the official autopsy data from the Russian archives, and the official radiographs of Adolf Hitler from the US archives, together with additional historical data from both sides, provides sufficient pieces of evidence in the definitive identification of the remains of the former Nazi leader Adolf Hitler.