There's another gruesome internet hoax making the rounds. A babysitter in De Soto, Missouri supposedly got so high on crystal meth that she attempted to cook a 3 year old child in a microwave oven. The story seems to have appeared on a site called badcriminals.com and was also picked up by tmzworldnews.com (not TMZ.com!) where it went viral. Other sites that carried the story were worldnewsdailyreport.com, dailymediabuzz.com, viralmugshots.com and folksvideo.com.

It claims 16-year old babysitter Anna Krutchiev "took a few hits" of crystal meth, after which she "got hungry" and eventually lost consciousness. A police officer only named as "Officer Johnson" was then quoted as recalling Krutchiev later said:

I just took a few tokes because I was bored and wanted to stay awake. All I remember is that I started getting really hungry, ate some chicken wings and passed out.

The parents of the kid then came home to find their child "in the microwave, covered in barbecue sauce", but fortunately Springfield's Mercy Hospital later said they did not fear of the kid's life, even though yet another police officer, a 'Sheriff deputy James Anderson' was quoted as saying:

It appears she tried to cook him in the microwave oven but apparently she was unable to do so, and was probably disoriented and lost consciousness moments later. The baby's arm was eaten and teeth marks were all over his legs.

All sites that carry the story regularily publish fake news stories designed to get people angry or disgusted enough to share them on social media without thinking. This latest made up story is obviously not true for several reasons, even if you ignore the fact that it is being pushed by websites that regularily publish things that are fake. 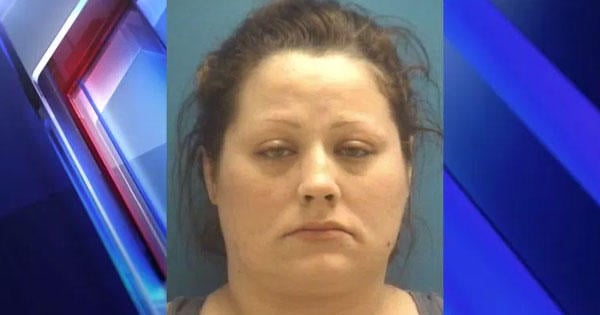 In fact, the photo was lifted from this story at Fox59 about a woman named Sarah L. De La Cruz Quiroga, 28 years old, who was arrested on January 2016 for domestic battery with a minor present.

So don't be fooled into sharing this story online like all these people: