Ken Starr, the lead prosecutor who helped congress impeach Bill Clinton, was on his way to Washington DC this morning when his plane disappeared from radar. A plume of smoke in the area the plane was seen after the plane was spotted just outside of Wilkershire, Maryland.

The NTSB says the tower in Philadelphia lost contact with the plane about ten minutes before the explosion and that without a significant development, it appears all five people on board were killed.

Early this morning, Ken Starr, the lead prosecutor who helped congress impeach Bill Clinton, was on his way to Washington DC when his plane disappeared from radar. The crash spot was just outside of Wilkershire, Maryland.

The NTSB says the control tower from the Philadelphia airport has lost full contact with the plane just two minutes before the crash explosion and that without a significant development, reports are saying that all five people on board were killed.

The orignal article is accompanied by an image purporting to be of the crash site: 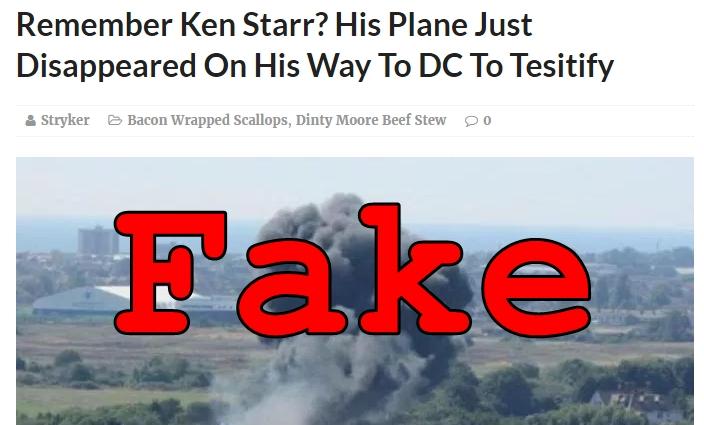 In fact the image comes from the 2015 Shoreham airshow crash, nowhere near Wilkershire, Maryland. Some versions of the story use a different image showing an ambulance and a fire truck, this image is from a different crash in Warangatta, Australia in 2016.

So far no other factchecking websites or hoaxbusters like Snopes have debunked the story but we expect that to happen shortly.

It will be interesting to see which of the sites in the network go with the original title and which ones attempt to fix the headline. You can follow the progress of the original story via the Trendolizer graph at the end of this article. And you notice anyone spreading a version of the fake story around you can help by pointing them to this article here because nobody likes being duped by fake news sites set up by scammers to trick people into clicking on ads and popups.