Fake news website World News Daily Report published an article simply titled "Qatar: Jealous Husband Seals Wife's Vagina with Crazy Glue" today, another one in a long series of articles about outrageous, made up crimes. Today's offering starts like this:

A Qatari man thought it was a good idea to seal his wife's vagina with crazy glue as he was going away for a few days on a business trip, reports the Doha Tribune this morning.

The 33-year-old man was brought forth before the court after his wife was rushed off to the emergency room and suffered medical complications and excruciating pain.

He confessed to the judge that he was guilty of gluing her genitals but only because he believed she had adulterous ideas after he found out she had liked a post of his 12-year-old cousin on Facebook.

The name of the supposed judge was "Muhammad Bin Saden" and predictably the husband got off with a $10 fine while the woman fared a lot worse:

Also, the judge pointed out that, after going through the evidence and photos the husband had brought to court, the suffering was in part justified but still decided the woman should be administered 100 lashes as to prevent further "misunderstandings" between her and her husband. 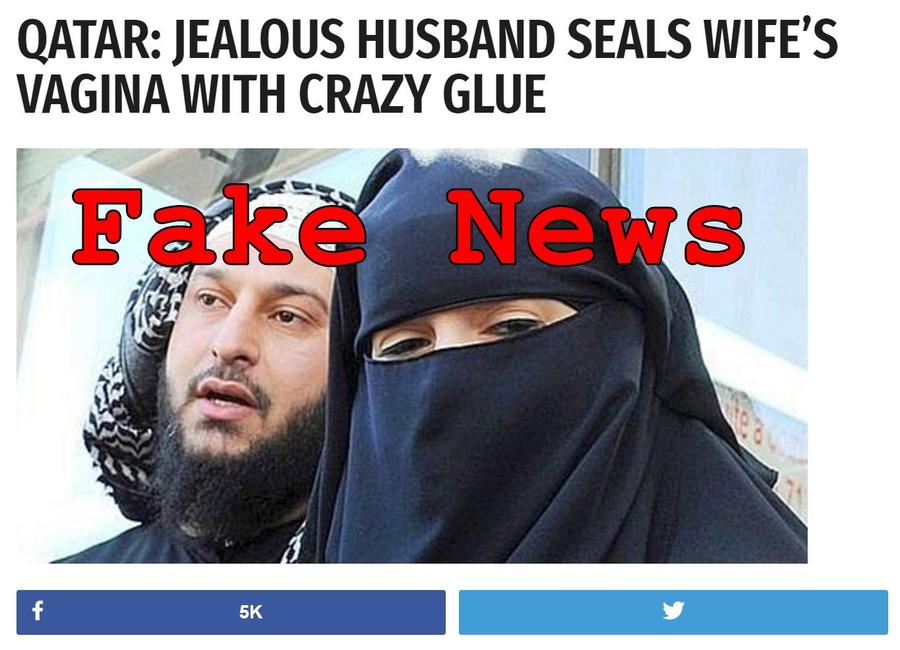 The image used with the story actually comes from a 2010 story from France about polygamy featuring Lies Hebbadj (the veiled woman).

Usually the fare on World News Daily Report is about crazy, over-the-top crimes with a high WTF-factor. Today's offering veers uncomfortably close to inciting religious hatred and racism in our opinion but it still is getting quite a few likes on Facebook as the Trendolizer graph at the end of this article demonstrates. If you see people believing this story and getting their stereotypes reinforced by it, don't hesitate to send them here to learn the truth.