Famous fake/satire website The Resistance: The Last Line of Defense posted an article titled "Gordon Ramsay Has His Entire Staff Take A Knee-Refuses To Serve Miami Dolphins Players" which opened:

Four Miami Dolphins showed up at Gordon Ramsay's Soho Social Gastropub for a bite to eat after their horrible performance and disrespect for our flag and our country. Linebackers Malcolm Warner and Clyde Vargus along with right guard Jefferson Michaels and left tackle Mutombo Toki Del Fuego were seated at a corner booth.

Ramsay walked over and introduced himself, telling them that he had followed all of the drama on TV, and invited them to join him at the pass for "something special." LLOD correspondent Cynthia Luwhoe, who was enjoying a French Dip at the time, reported in on what happened next:

"Ramsay had the entire staff gather at the pass and instructed them to take a knee. 'You are four of the most disrespectfrul young men I've ever met, said Ramsay, 'my staff is better than that; better than you. You won'rt be getting service here tonight. F*ck off with the lot of you.'"

The story is completely ficticious and not true at all. The roster for the Miami Dolphins (archived) doesn't even list anyone named Malcolm Warner, Clyde Vargus, Jefferson Michaels or Mutombo Toki Del Fuego. 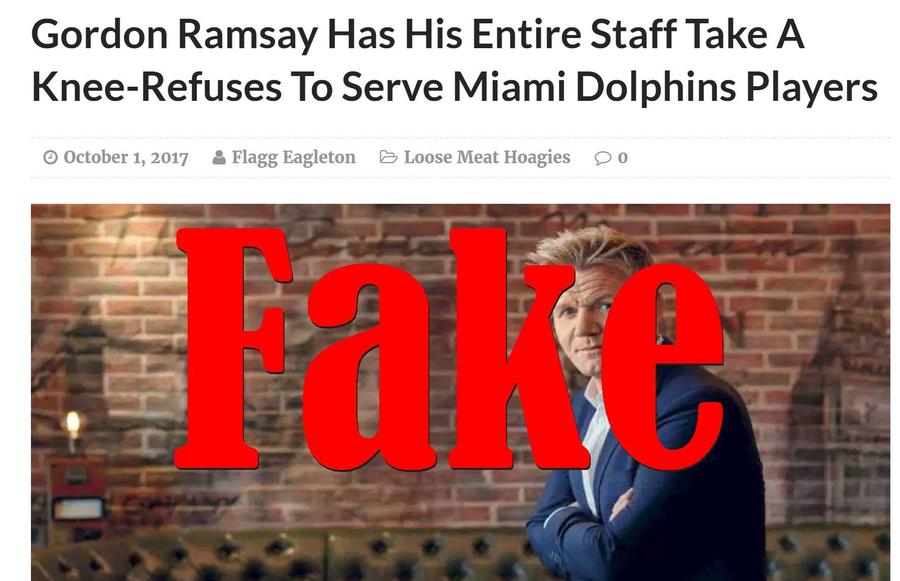 The Resistance: The Last Line of Defense also carries a satire disclaimer at the bottom of the page which reads: