After it was discovered that Roy Moore's accuser is a liar and a Democrat, Alabama Attorney General John Simmons filed charges of falsification, a 1st-degree misdemeanor. Mary Lynne Davies, who said Roy Moore seduced and molested her when she was 14-years-old and he was in his early 30s, now faces a year in prison and $10K in fines.

The revelation came after the yearbook inscription that Moore supposedly wrote in the 1970s turned out to be a forgery. Davies, who tried desperately to convince anyone who would listen that Moore raped her, is now in hiding after posting $500 in bail money. Her attorney says she sticks by her story:

"My client's main concern is that because of the yearbook thing, nobody will believe her story. She fabricated the yearbook because nobody would listen in the first place. She's a victim and now she'll be prosecuted while her abuser goes to the US Senate.

Nothing about this is right. Nothing."

Nothing is right about this story indeed. First of all John Simmons is not attorney general of Alabama, Steve Marshal (R) is. And there have been no media reports yet about a "Mary Lynne Davies" accusing Roy Moore of anything. There is a Beverly Young Nelson accusing him of sexual misconduct and she indeed tried to prove her case with a yearbook inscription that media reports now say she altered by "adding notes" to it. But so far she hasn't been charged with any crimes or misdemeanors in connection with that. 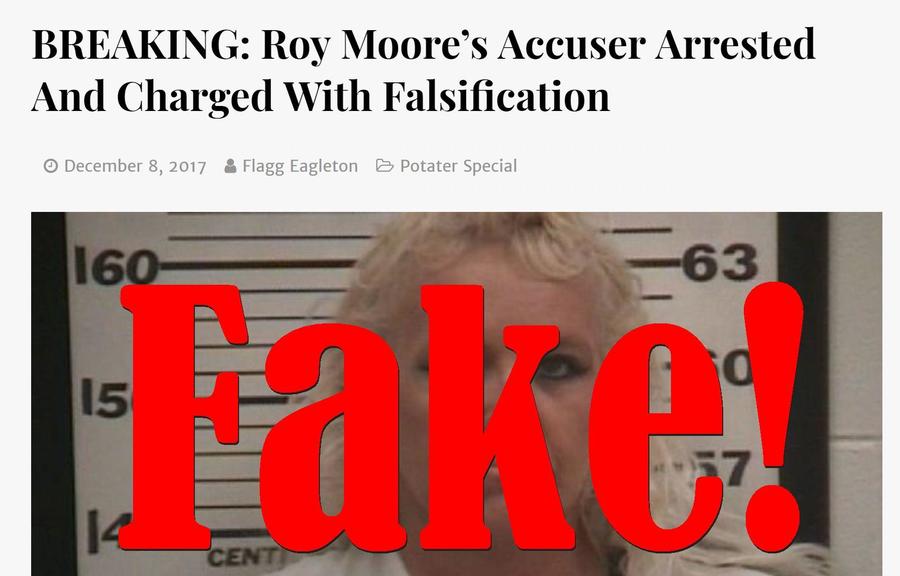 In addition to all of that the site nofakenews.online carries a disclaimer at the bottom of each page:

The owner and main writer of the site is self-professed liberal troll Christopher Blair, a man from Maine who has made it his full time job to troll gullible conservatives and Trump supporters into liking and sharing his articles. He runs several other websites such as reaganwasright.com, thelastlineofdefense.online and potatriotpost.com. Sometimes he is also known under his nickname "Busta Troll". He has at least one accomplice who writes under the pen names "Freedom", "Captain Jellypants", "Butch Mannington" or "Captain Buck Atlantis".