Did you read the 'news' about Bill O'Connor, a 63-year old Canadian trapper who was assaulted by a 200-pound beaver near Jackhead on Lake Winnipeg? None of it happened although it was very funny if you love sexual double-entendres and puns.

Jackhead | A Canadian trapper claims he has survived a brutal sexual assault by what he calls the "biggest beaver he has ever seen."

Bill O'Connor, 63, was checking his beaver traps near Lake Winnipeg when a large bear-like creature attacked him out of nowhere.

O'Connor, who first thought he was being mauled by a small bear or wolverine, soon realized it was, in fact, a very large-sized beaver.

"I had never seen a beaver of this size in my entire life," he told local reporters.

The beaver, apparently bruised by one his traps, was extremely aggressive and even managed to knock the sixty-three-year-old man unconscious before he awoke minutes later.

The man shown in the picture that goes with the story is actually Gordon Webber, an actual fur trapper from New Hampshire. We found his picture in a 2015 archived article in the Monadnock Ledger-Transcript so unless he changed his name and moved to Canada it is definitely not him. 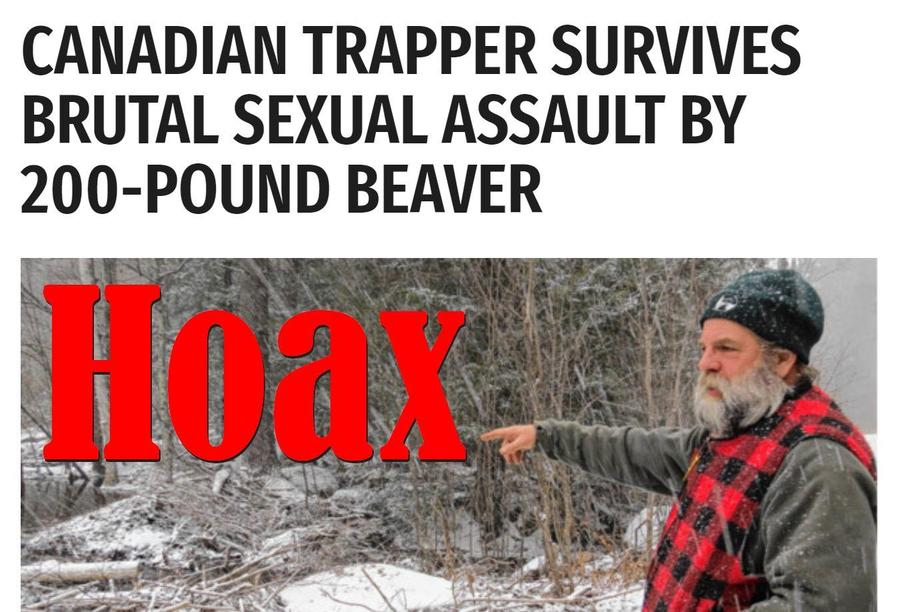 People who saw the story on social media did not get to see the satire disclaimer and many possibly believed the story to be true because it would have looked something like this to them:

Jackhead | A Canadian trapper claims he has survived a brutal sexual assault by what he calls the "biggest beaver he has ever seen." Bill O'Connor, 63, was checking his beaver traps near Lake Winnipeg when a large bear-like creature attacked him out of nowhere.

Stories from the site frequently get copied by real fake news websites that omit the satire disclaimer and any mention of the source (sites that copy content without even acknowledging their source are terrible; unfortunately we know this from experience). In any case this is one of the most viral stories published by the site lately, breaking over 1000 Facebook engagements in one day (something that has happened rarely over the past few weeks).