We sometimes get asked by readers why we bother fact checking and debunking stories that were clearly meant as satire and which are properly labeled as such by the sites that published them. We have four main reasons for doing that: 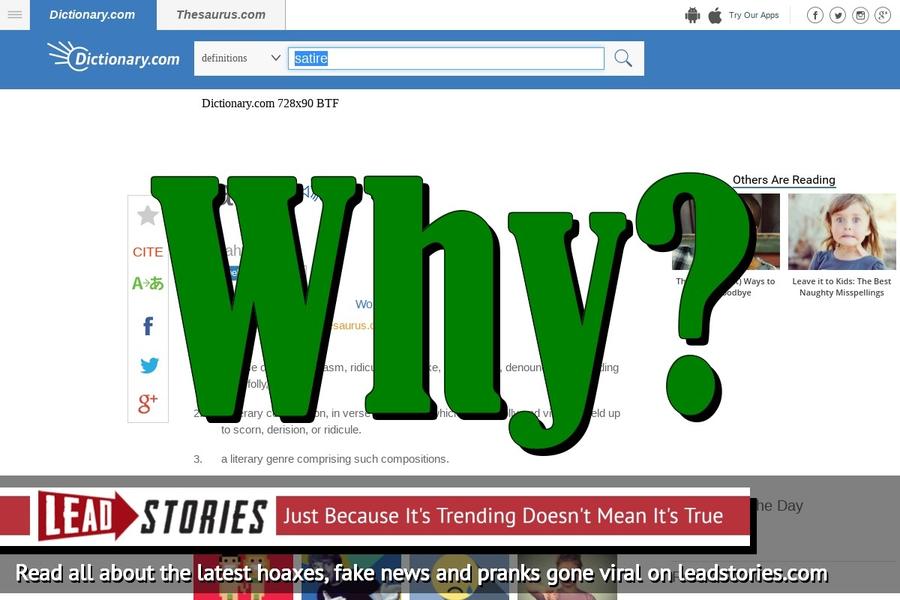 Before expanding on those reasons we would like to make it clear we generally don't go around systematically debunking every satirical story we can find. As described in our "How We Work" page we only pick and choose the ones that are actually trending and which might somehow conceivably be mistaken for real news. So you won't find us doing this:

CNN invested in an industrial-sized washing machine to help their journalists and news anchors spin the news before publication.

That being said, here are the reasons why we debunk satirical stories:

When a link to a story is shared on social media like Twitter or Facebook those sites will show users a preview of the article including a thumbnail, description and short summary provided by the site it came from. Very often people like, share or comment on a story without actually clicking the link. And if there is no clear indication the story is satire in the shortened version it might lead some people to believe it is real. A few might get suspicious enough to do a quick Google search to check if it is true first. We want to be there for those people.

Fake stories written with a satirical intent and with all the proper satire disclaimers present on the page sometimes get copied by websites that don't respect copyright law and which omit any mention of the source or nature of the article they are stealing. Some stories keep getting copied over and over like this, sometimes even years after the publication of the original.

These content stealing sites present the stories as real news in order to cash in on somebody elses's work. As with "real" satire, Lead Stories wants to be there for people who Google first before sharing.

The word "fauxtire" is a contraction between "faux" and "satire", i.e. fake satire. We use the term to describe the content of sites that publish made up stories often involving bizarre crimes, dumb criminals or weird sex acts presented as news but with a tiny satire disclaimer at the bottom of the page or on an "about" page hidden somewhere on the site. They use this as a convenient cover story to avoid being blocked or filtered by social media networks which generally have satire exceptions in their Terms of Service.

But proper satire generally mocks existing people, organisations or events with funny stories or annecdotes that spoof or exaggerate certain traits or features or by taking things to such a logical extreme it becomes absurd in a funny way.

Fauxtire on the other hand generally just tells a bizarre story about made up people. Sometimes it is funny, sometimes not so much. Like with most arguments about taste and humor it is hard to draw an exact line but we want to be there for people that get confused and just want to know if it was true or not.

Some people are just blinded by bias

Even with all the disclaimers in the world and obvious satire hints sprinkled throughout a story some people will still choose to believe and share anything just because it agrees witht their worldview. Any article accusing a hated political opponent of heinous things must be true, no need to even read it.

Lead Stories wants to be there for the friends and family of such people so they have a link to share in the inevitable heated discussion that follows after this person shares the satire story as real news on Facebook. We will then gladly take the burden of being accused of being "Liberal NRA-supporting Zionist Nazi Stooges of Marxist Capitalism Under Alien Control Who Hate Children" depending on the slant of the original fake story.