Was WWE legend Ric Flair declared brain dead? No, that's not true: the story is a hoax by a site that presents fictional stories as entertainment news but which has a tiny satire disclaimer hidden at the bottom of the page. It is not real.

WWE Ric Flair has been declared brain dead after a medical emergency led him to being hospitalized earlier today. According to several news reports, it's unclear what medical emergency led him to the hospital to begin with but sources have now said that the wrestling legend's is no longer functioning although his other organs are still working at this time. Ric Flair is still on a breathing machine until his family gives permission to disconnect him but as of now, he is declared brain dead, thus legally dead. Flair was in the metro Atlanta area when he was rushed to the hospital. Sources have not confirmed his medical emergency and TMZ reported that it was very serious. Pro Wrestling Sheet reported that Flair has been suffering from a heart condition as of late and that his hospitalization was in relation to that. Without confirmation, fans have been left to speculate. In 2017, Ric Flair was hospitalized after a medical scare which resulted in surgery. Flair was had only a 20% chance of survival which he beat. 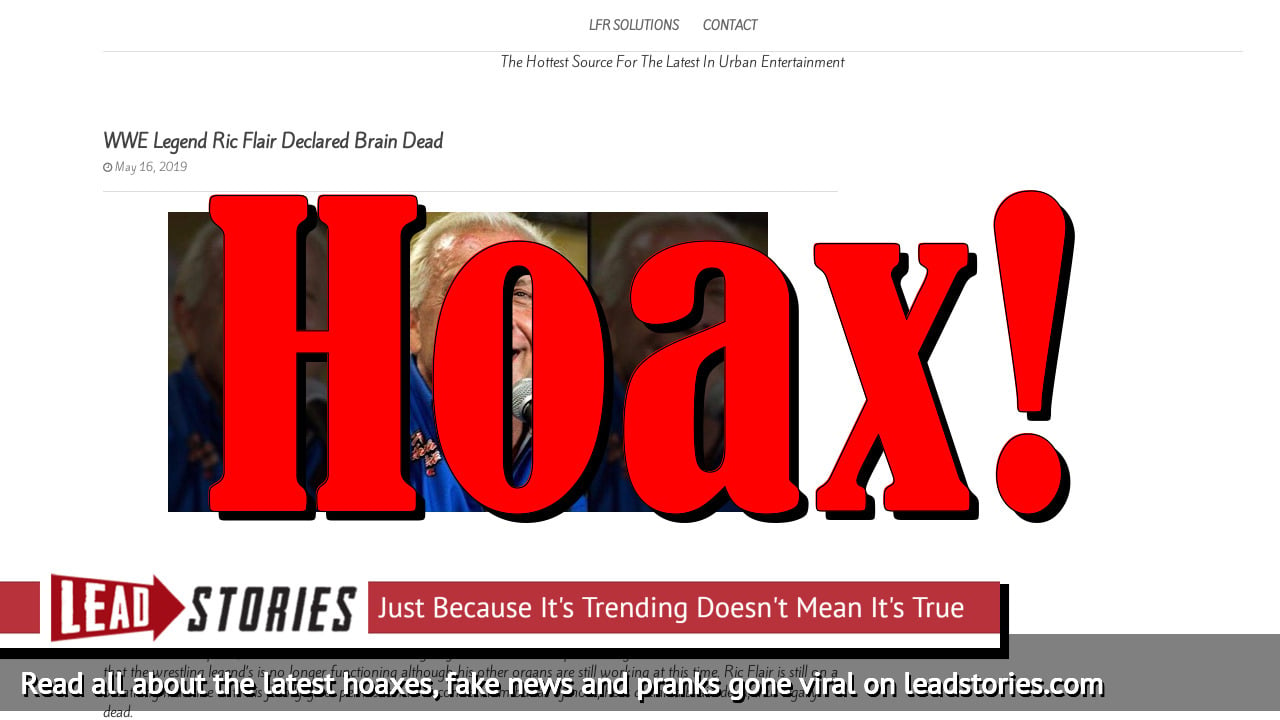 Users on social media only saw this title and thumbnail, offering no clue the story was fake:

We checked TMZ and they did indeed post a story on May 17, 2019 about Flair being hospitalized after a "very serious" medical emergency:

Ric Flair Hospitalized After 'Very Serious' Medical Emergency Ric Flair was rushed to a hospital Thursday morning after suffering a medical emergency, TMZ Sports has learned. We're told Flair was in the Atlanta area when something went wrong. The 70-year-old WWE legend was initially taken to the emergency room to be treated.

But they have since updated that article with a new headline that says "RIC FLAIR EXPECTED TO MAKE FULL RECOVERY... Wife Says". And the story makes no mention about brain death.

The site LFR Solutions comes with a disclaimer at the bottom of every page that reads:

The stories posted on lfrsolutions.com are for entertainment purposes only. The stories may mimic articles found in the headlines, but rest assured they are purely satirical.

However that disclaimer is between four and five pixels tall so it is hardly legible on most screens. To us that indicates deception is going on so in accordance with our Satire Policy we rate this story "False".

We wrote about lfrsolutions.com before, here is our most recent article that mentions the site: