Was an alert sent out to "all law enforcement and government officials" to check the tops of purchased water bottles for poison injection marks and have people "in the Richmond area" died from it? No, that's not true: a hoax from last year is still circulating today under the form of a viral internet image but it still isn't true.

An example of the image can be found in this Facebook post (archived here) where it was published today. The text on the image read:

They sent a alert out to all law enforcement and government officials to check the tops of every purchased water bottle because someone is going around injecting poison into the tops of the water to where you dnt recognize that it's been tampered with.. you have to turn the bottle upside down and squeeze before opening it. If it leaks throw it away . A few people have already died in the Richmond area.. the sheriff just made the announcement Please pass word arou(nd)

Here is an example of the image: 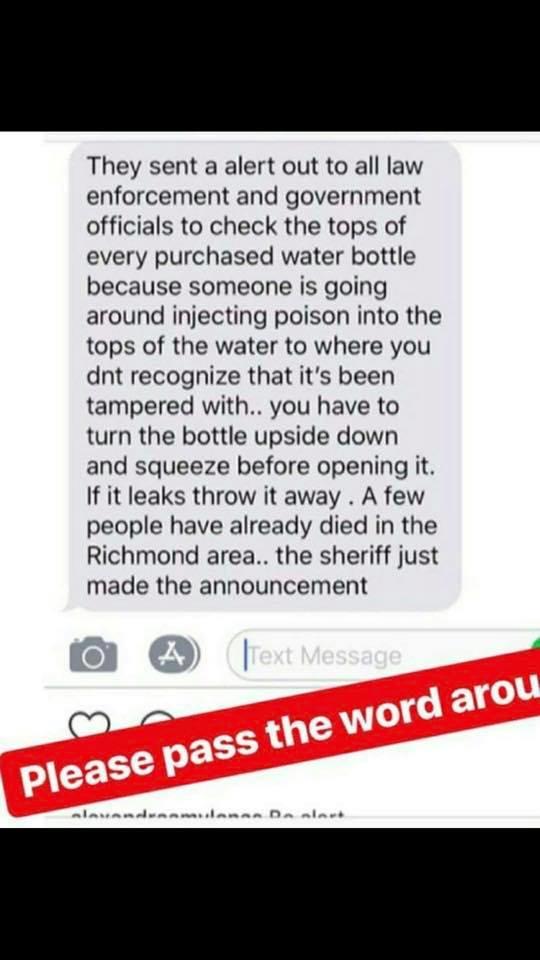 We found no reports of poisonings through water bottles in Richmond and we checked the websites of several Richmond sherrifs (note there are several cities, towns and counties by that name) but we found no trace of any of these reports.

It appears the story has been circulating on social media since at least March 2018 and since then several fact checking sites have looked into the matter and found no evidence it was real:

FACT CHECK: Have Officials Warned That Someone Is Injecting Poison into Plastic Water Bottles?

In March 2018, we began receiving inquiries from readers about an alert spreading on social media saying that several people had died after drinking bottled water purposely injected with poison. The minute amount of information provided was vague and unsourced.

According to a message that is currently circulating via social media, law enforcement and government officials are warning consumers to check the tops of bottled water for possible tampering. The warning claims that someone is going around injecting poison into the tops of water bottles and that a "few people have already died in the Richmond area".

No, someone isn't injecting poison into water bottle caps

A text screenshot-turned meme is going around the internet claiming that law enforcement is warning the public about someone injecting poison into the caps of water bottles. The post, shared on Facebook, appears to show a screenshot of a text message with

If you see warnings circulating on social media claiming the police or authorities have warned the public about someone tampering with food or drinks, always check first where the warnings actually came from and when they were issued before you share them with your friends and family. A quick trip to Google or a look in the comments section can sometimes be all it takes to find out the truth.