Was a satanic pentagram displayed on the ceiling above the stage of the Democratic presidential debate stage in Westerville, Ohio? No, that's not true: A purported photo showing the pentagram above the Democratic candidates was digitally altered. It was not seen during the CNN telecast or on other images from the debate.

The fake image and false claim originated in a tweet (archived here) posted by InfoWars editor Adan Salaza hours after the October 15, 2019 debate. The message above the photo of the debate stage read:

Didn't see any American flags during #CNN #DemDebate, but i did catch another symbol... 👀

Didn't see any American flags during #CNN #DemDebate, but i did catch another symbol... 👀 pic.twitter.com/yN3tR5qWvE

Salazar was correct that the stage, which was controlled by CNN, was not lined with American flag, but it was quickly pointed out that Salazar's image was faked:

I hate to spoil the conspiracy fun but you all are falling for a photo-shopped picture. Just do a simple Google search. pic.twitter.com/SE4gvSvaOm

Still, some people fell for the hoax and shared it:

#DemocraticDebate
No flag anywhere - but here's the kicker - isn't that a pentagram on the ceiling? It's the satanic sign. https://t.co/en3fezGVT7

Here is the faked photo: 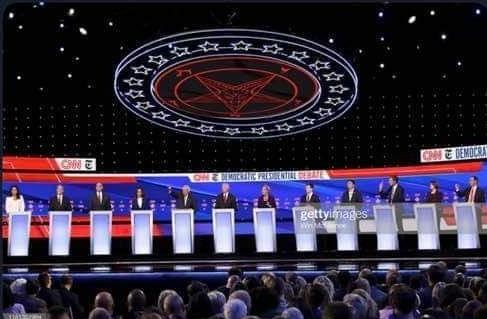 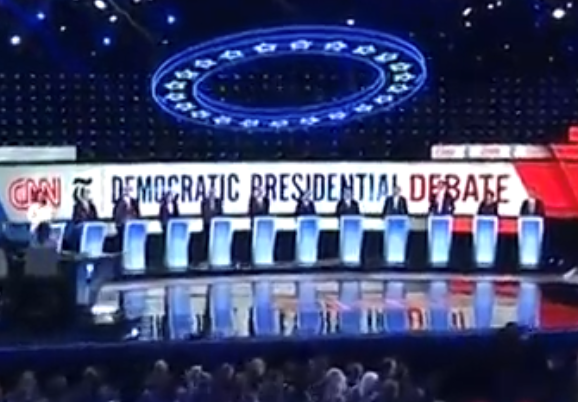 One of the Twitter users shown above -- @RealPamelaAnne -- later posted that she discovered the image was faked.