Does the Impossible Whopper contain so much estrogen that men who eat too many of them are at risk of growing breasts? No, that's not true: The Impossible Burger, in fact, contains no estrogen whatsoever.

The claim originated from an article (archived here) written by a South Dakota veterinarian, Dr. James Stangle, that was published by Tri-State Livestock News on December 20, 2019, under the title "Stangle: Impossible burgers are made of what?" It opened:

The impossible whopper is being advertised by Burger King as a plant based alternative to the whopper. When food manufacturers started talking about making artificial meat, I, too, thought it would be impossible to make a hamburger cheaply enough to make it competitive. You see, I assumed that they would have to buy the individual amino acids (the building blocks for protein) and chemically string them together in the proper order, then remove the reagents (chemicals needed to cause the chain reactions) and then add something to give it the right textures 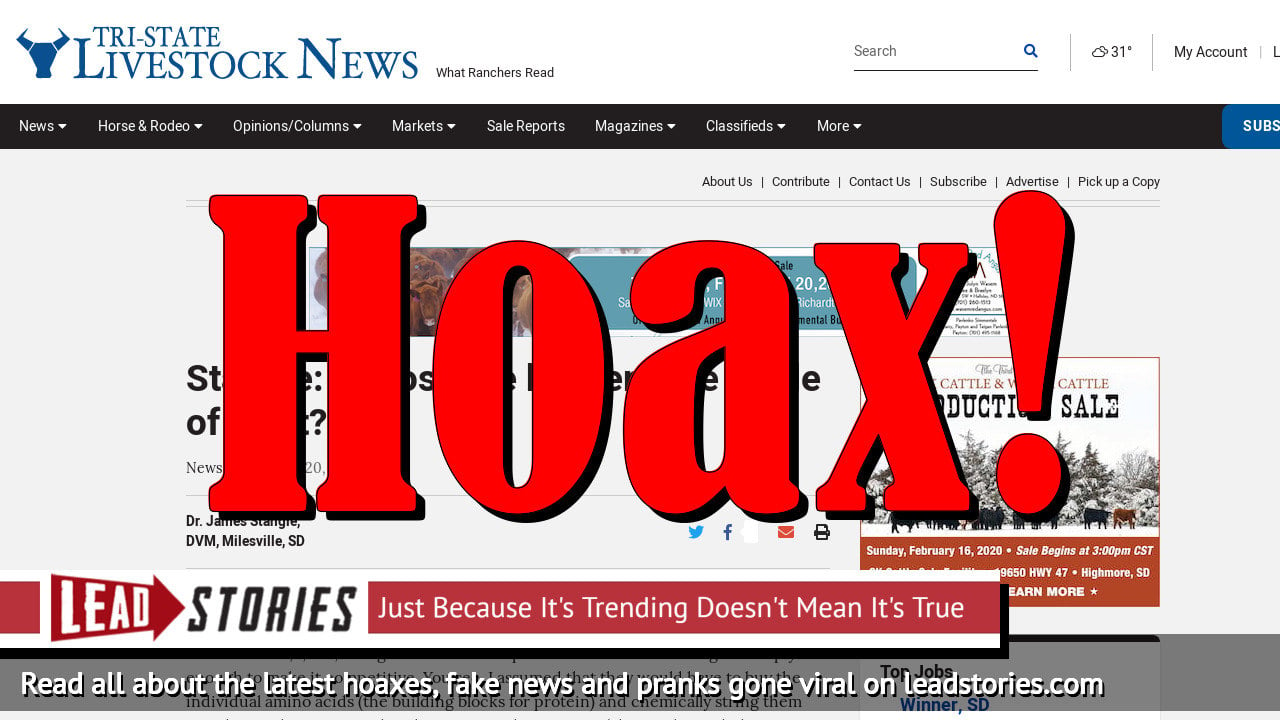 Tri-State Livestock News is a publication that caters to ranchers. In his column, Stangle (again, a veterinarian) makes a number of claims about the Impossible Whopper. The most jarring is that the meatless Whopper has "44 mg of estrogen," which amounts to "18 million times as much estrogen as a regular whopper."

The effect of this much estrogen, Stangle claims, could cause a man who eats four Impossible Whoppers a day "to grow boobs."

Here is how that part of his article reads:

Other conservative sites have run with these claims about the dangers of the Impossible Burger, including MichaelSavage.com (though the story has since disappeared from its site) and National File.

Tom Pappert, National File's editor-in-chief, summed up the story he wrote this way:

In short, the Impossible Burger is a genetically modified organism filled with calorie-dense oils that can make a man grow breasts if eaten in overwhelming quantity.

A spokeswoman for Impossible Foods, the makers of the Impossible Burger, was quick to dispel fears about estrogen in this meatless product. "Impossible Burger contains no estrogen," Rachel Konrad shared in an email. "It contains under 2 mg of isoflavones, a harmless compound found in soy."

What exists in soy products is phytoestrogens (not estrogen), which are not "equal in terms of their effect on hormonally mediated processes," Snopes reported.

Here's how Snopes explained this:

When people express concern about "estrogen" in soy products, they are actually expressing concern about phytoestrogens -- a class of compounds structurally similar to but nonetheless different from estrogens. In soy products, the most relevant chemicals meeting this description are known as isoflavones. Though Stangle devotes ample space to the lesson "not all proteins are created equal," he frequently relies on the demonstrably false assumption that phytoestrogens and estrogens are equal in terms of their effect on hormonally mediated processes.

This is not the case. Simply put, though phytoestrogens do interact with the human body in ways that disrupt estrogen-controlled processes, their effect in almost all cases is much less pronounced than that of actual estrogens. For this reason, Stangle's comparison of "estrogen" levels in Impossible Whoppers and birth control pills, which contain synthetic estrogen compounds, is problematic.

The notion that soy might mess with men's chests seems to stem back to a 2008 medical journal report, according to a piece published on January 7, 2015, on Nutrition Action, a site that offers "direct and reliable information about the foods you eat" and is produced by the nonprofit Center for Science in the Public Interest.

The 2015 story that looked at the history of these soy-fear claims was titled, "How to Diet: Does Soy Impact Masculinity?"

Here's what the Nutrition Action story had to say:

The scare may have started with a 2008 report in a medical journal about a 60-year-old Texas man who complained of sore, enlarged breasts and a decreased libido.

Tests revealed that his level of blood estrogens was up to eight times higher than the top of the normal range. The man said he was lactose intolerant and drank three quarts of soymilk a day. That would have given him a daily dose of 360 mg of isoflavones, about 10 times what the average man in Asia consumes.

After the man stopped drinking soymilk, his estrogens returned to normal and his breast tenderness disappeared. No other similar cases have ever been reported.

Konrad, of Impossible Foods, called the article put out by Stangle "propaganda" and part of "Big Beef's Soviet-style disinformation campaign."

The final bullet points in her email did not mince words:

We respect people's right to their opinions, and we appreciate sarcasm and parody (especially on social media). But any indication that soy has negative or unintended health consequences is ridiculous and flies in the face of thousands of peer-reviewed studies.