Did Joe Biden vote in favor of taxing 50% of Social Security in 1983 and was his the deciding vote to tax 85% in 1993? No, that's not true: The 1983 vote was to tax 50% of Social Security payments only for people who had a certain level of additional income. Biden voted for the bipartisan legislation, which was written and sponsored by Rep. Dan Rostenskowski, D-Ill, (NOT Biden) and President Ronald Reagan supported as part of a plan to rescue the program from insolvency. Biden also voted for the 1993 increase, but it was Vice President Al Gore who cast the tie-breaking vote.

The claims appeared in memes, texts posts and tweets, including in a post (archived here) shared on Facebook on September 19, 2020. It read:

Prior to 1983, social security was not taxable. In 1983, Joe Biden voted in favor of taxing 50% of social security - and it passed. In 1993, Joe Biden doubled down and was the deciding vote in raising the percentage taxed on social security from 50% to 85%. Joe Biden is not a friend to working folks - and certainly not to retirees. His voting record on social security over the years is one slap in the face to retirees after another. Now he wants to tax our 401k's and IRA's (it's on page 78 of the Dems' platform) and he also wants to introduce a 3% annual tax on our homes. The record of Joe Biden shows he never misses an opportunity to raise a tax or introduce a tax to hurt the middle class and retirees. 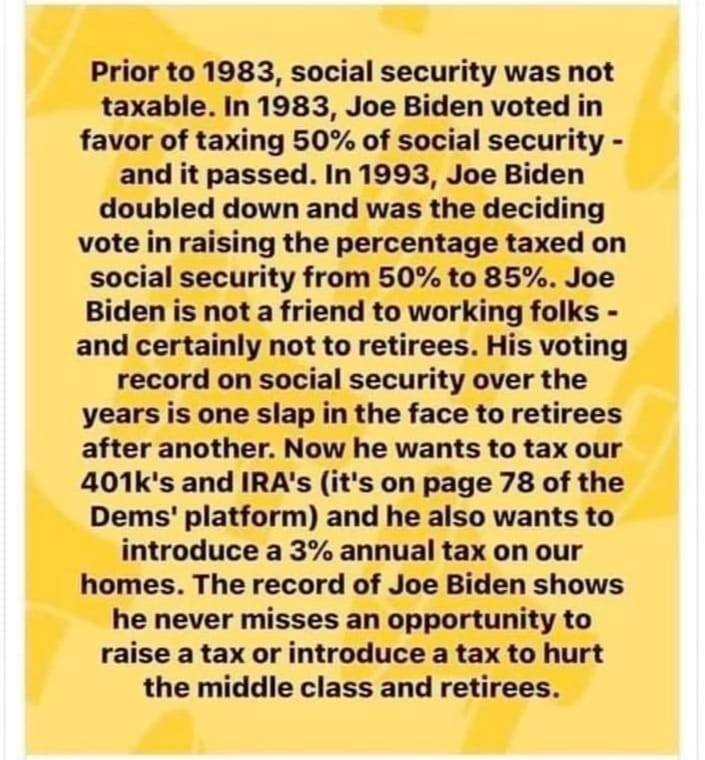 This fact check will focus only on the historical aspects of this meme, not the current political positions.

The House and Senate -- with Biden's yes vote -- passed H.R.1900 - the Social Security Amendments of 1983 and President Ronald Reagan signed it into law on April 20, 1983. As Reagan signed it, he delivered this message:

This bill demonstrates for all time our Nation's ironclad commitment to Social Security. It assures the elderly that America will always keep the promises made in troubled times a half a century ago. It assures those who are still working that they, too, have a pact with the future. From this day forward, they have our pledge that they will get their fair share of benefits when they retire . . . .
Our elderly need no longer fear that the checks they depend on will be stopped or reduced. These amendments protect them. Americans of middle age need no longer worry whether their career-long investment will pay off. These amendments guarantee it. And younger people can feel confident that Social Security will still be around when they need it to cushion their retirement.

It was hailed as a "good politics" and a deal that proved bipartisanship could work, according to a 2009 U.S. News analysis:

Ronald Reagan and House Speaker Tip O'Neill demonstrated in 1983, however, that bipartisan action can happen in swift and surprising terms on the thorniest and most insoluble of issues. Like all historical analogues, the 1983 Social Security compromise is far from a perfect fit for Obama's Washington. Nowadays, Democrats enjoy one-party rule; in 1983, Reagan confronted a large Democratic majority in the House. 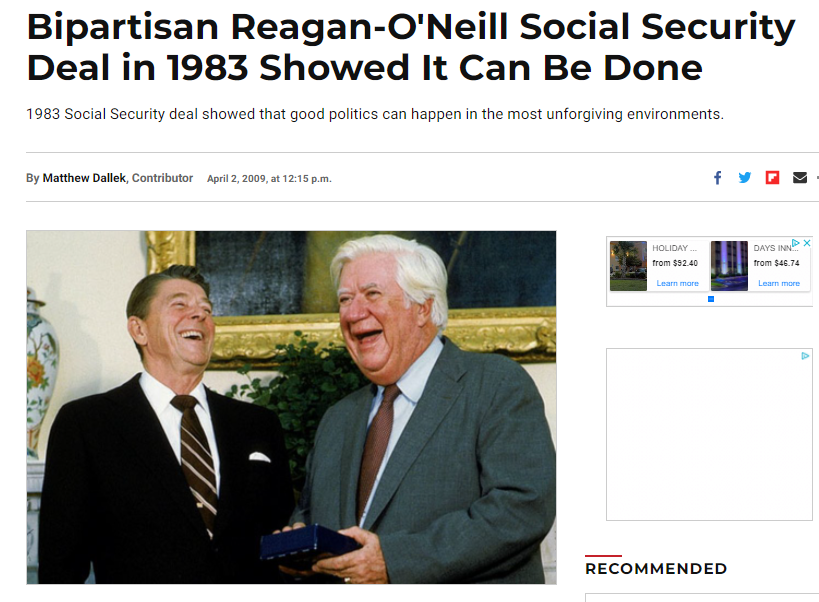 The 1983 legislation, which originated in the House and was written by House Ways and Means Committee Chairman Dan Rostenskowski, did more than just make 50% of Social Security payments taxable above certain incomes. Click here to see what else it included.

The meme's claims about the 1993 vote are also false. The Omnibus Budget Reconciliation Act of 1993 raised the amount of Social Security payments that would be taxed from 50% to 85%, but as in 1983 it was just for those making more than a certain level of income:

Made up to 85% of Social Security benefits subject to the income tax for recipients whose income plus one-half of their benefits exceed $34,000 (single) and $44,000 (couple).

Eliminated the maximum taxable earnings base for HI, i.e., subjected all earnings to the HI tax, effective in 1994.

The Social Security Administration addresses a number of false claims about the program on a webpage titled MYTHS AND MISINFORMATION ABOUT SOCIAL SECURITY.