Were thousands of mail-in ballots for the 2020 election found dumped at a Sonoma County, California, landfill in September 2020? No, that's not true: Sonoma County voting officials issued an alert Friday to shoot down the claim, noting that the photographs showed "old empty envelopes from the November 2018 election that were disposed of as allowed by law."

The claim appeared in social platforms, including a post (archived here) shared on Facebook on September 25, 2020 under the title "We have all seen stories of ballots in landfills. Here is one posted by my friend with pictures. As always draw your own conclusions as to how corrupt or not this process will be." That text above the photos read:

I give a zero percent chance of this being a clean election. Thousands of mail-in ballots were discovered dumped at a Petaluma (Sonoma County) CA. landfill facility today. As the person who discovered them was questioning the people at the facility and calling local officials, the guy climbing out of the dumpster was observed covering them up with piles of cardboard.
I attached photos that I took as screenshots since the Facebook police won't let me post the direct link to the article. That in itself indicates there maybe something to the story.

The Sonoma County government issued a public request to "Help us stop a false report," which was tweeted on its official Twitter account, Friday evening, September 25, 2020:

Help us stop a false report
Someone posted pictures on the web showing empty Vote-by-Mail envelopes from Sonoma County in recycling bins. The pictures are of old empty envelopes from the November 2018 election that were disposed of as allowed by law.

Help us stop a false report
Someone posted pictures on the web showing empty Vote-by-Mail envelopes from Sonoma County in recycling bins. The pictures are of old empty envelopes from the November 2018 election that were disposed of as allowed by law. pic.twitter.com/0FrhnD3jHg

For historical purposes -- since the images may disappear -- here is a screenshot of the photo montage: 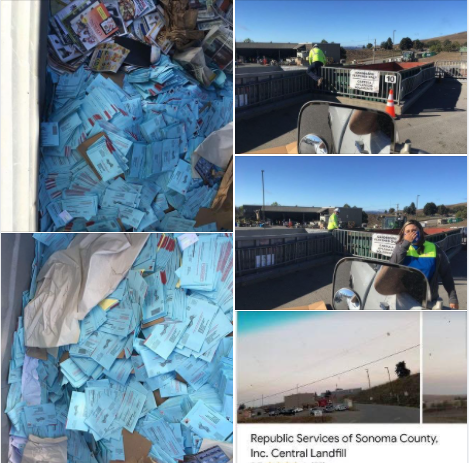