Did Joe Biden's first wife run a stop sign before she was killed in a car accident? No, that's not true. Neilia Biden and their children Naomi, Beau and Hunter, were in a car accident on December 18, 1972. She did not run a stop sign but "pulled from a stop sign" when a tractor-trailer crashed into her car in Hockessin, Delaware, killing her and the baby girl, according to the Associated Press report published in the Delaware County Daily Times at the time. There were no reports that she was drunk.

The claim appeared as a post (archived here) where it was published on Facebook October 6, 2020. It opened:

Biden said his first wife was killed by a drunken driver Fact: His wife ran a stop sign and the driver that hit his wife was not drinking.

The bottom of the meme reads:

According to reports, she was the one drunk when she ran the stop sign, She found out that biden was leaving her for his present wife so she grabbed the kids and took off. The driver that hit her was destroyed and blamed for the entire accident to make biden look like the grieving husband and father. This is who wants to ruin this country! And now he is using the accident as a campaign ad! Disgusting.

There were no reports at the time or later that accused Neilia Biden of being drunk. Senator Biden did not meet his second wife, Jill, until more than two years later in March, 1975, according to the New York Times.

Multiple claims have surfaced on social media that Neilia Biden ran a stop sign before truck driver Curtis Dunn hit her station wagon, killing her and the baby daughter they called Amy and injuring Hunter and Beau Biden, who were toddlers at the time, the New York Times reported.

Biden said his first wife was killed by a drunken driver Fact check: Wife ran a stop sign and driver that hit her was NOT Drunk

The Delaware County Daily Times published a report by the Associated Press on Tuesday, December 18, 9172, with the details about the accident which clearly state she had stopped at a stop sign and then was going forward.

Police said the Biden's station wagon "pulled from a stop sign" and was struck on the left side by the truck, "continuing approximately 150 feet, spinning around, going backwards down and embankment, and striking three trees." 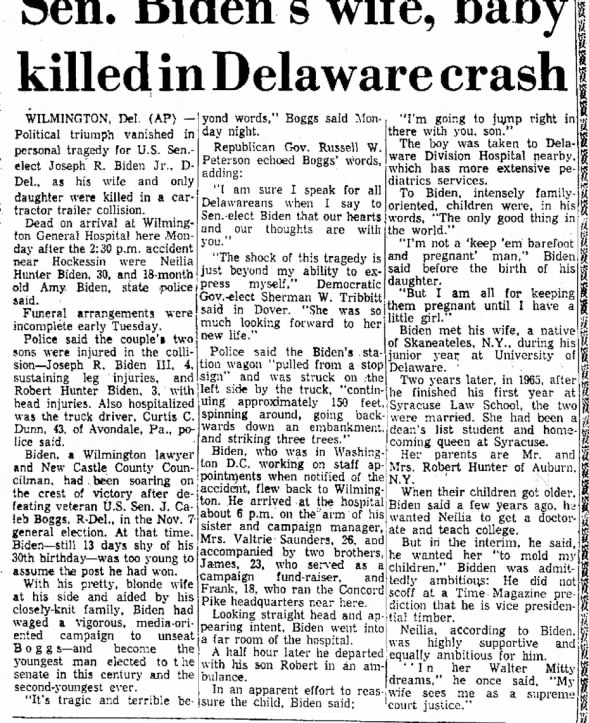 The meme also claims "Biden said his first wife was killed by a drunk driver."

While there was no evidence that Dunn was drinking while driving the truck, Biden did make this comment in 2001 and again in 2007.

Biden gave a speech at the University of Delaware a week after the 9/11 terrorist attacks where he first spoke about the driver drinking.

To the loved ones of the victims, there is nothing really we can say to erase this tragedy. And, those of you who think it's presumptuous of me to say that ... in a different circumstance, I got one of those phone calls ... I got a phone call saying, "Your wife's dead; your daughter's dead." And I've only said that three times in public before. But, I say it here because it's so important for you to understand. I got one of those phone calls. It was an errant driver who stopped to drink instead of drive and hit a tractor-trailer, hit my children and my wife and killed them."

He said it again in 2007 while on the campaign trail in Iowa when answering a question about negative campaigning, the New York Times reported.

"Let me tell you a little story," Mr. Biden told the crowd at the University of Iowa.. "I got elected when I was 29, and I got elected November the 7th. And on Dec. 18 of that year, my wife and three kids were Christmas shopping for a Christmas tree. A tractor-trailer, a guy who allegedly -- and I never pursued it -- drank his lunch instead of eating his lunch, broadsided my family and killed my wife instantly, and killed my daughter instantly, and hospitalized my two sons, with what were thought to be at the time permanent, fundamental injuries."

A Politico article in 2019 noted Dunn was never charged with drunk driving.

The driver of the truck, Curtis C. Dunn of Pennsylvania, was not charged with drunk driving. He wasn't charged with anything. The accident was an accident, and though the police file no longer exists, coverage in the newspapers at the time made it clear that fault was not in question. For whatever reason, Neilia Biden, who was holding the baby, ended up in the right of way of Dunn's truck coming down a long hill.
"She had a stop sign. The truck driver did not," Jerome Herlihy told me. He's a retired judge who then was a deputy attorney general and once was a neighbor to Biden and remains friendly. A pal of Biden at the time asked Herlihy "to go out to the state police troop where the driver of the other vehicle was to make sure everything was going all right," and so he did. "In the end," Herlihy said, "I concurred in their decision that there was no fault on his part."

The Associated Press spoke with Dunn's family in 2019 about Biden's comments.

Dunn's daughter Pamela Hamill told the AP Biden called her after she publicly criticized his comments about her father, and while he apologized for the comments on the phone never did so publicly.
Biden later called her -- at first agitated about the impact the controversy was having on his own mother, who he said "had to go on anxiety medication," in Hamill's recounting. Further, Biden told her it was his own son, Beau, who had had to retrieve the accident report.
"Then he was very apologetic," Hamill continued. "By this time I was in tears. He said, 'I'm sorry, don't cry. I will come to your home with all your family there and apologize.'" But Biden told her he would not issue a public apology, telling Hamill that it would "end up in all the trashy magazines in the grocery store."
Hamill never took him up on the offer to meet with her family, worried about how her mother would handle it. She never heard from him again.
"I wish he would have done it publicly, but I put it to rest after that," Hamill said.
His refusal to make a public apology, she said, "is very telling."