Is this a photo of Nancy Pelosi, George Stephanopoulos and Chirs Wallace? Yes, it was taken on February 5, 2019, as Speaker Pelosi met with the network television anchors just before President Trump delivered the annual State of the Union address. It was a media availability that is routine ahead of such events.

What are they doing with the speaker of the house ????

This photo was one of nine that Pelosi posted in a Medium article five days after the state of the union. The caption on the photo in question read, "Speaker Pelosi meets with TV anchors prior to the State of the Union address; Judy Woodruff, PBS; George Stephanopoulos, ABC; Margaret Brennan, CBS; Chris Wallace, Fox News; Jeff Glor, CBS; David Muir, ABC. February 5, 2019 (Photo by Julio Obscura)." Julio Obscura is the creative director for the Speaker Pelosi and has many other photos of her in his portfolio. 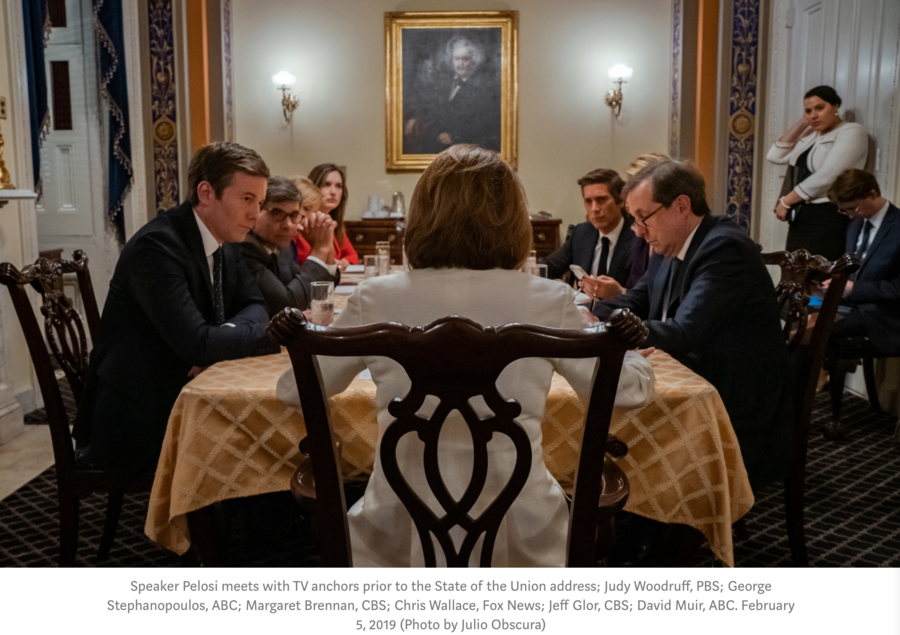 So why are some Facebook users taking issue with this photo? One of the driving conspiracies behind Q-Anon is the claim that there is a group of Democratic politicians attempting to take down President Trump, otherwise known as the "deep state."

Wallace, a FOX News host, has also beome a target of Q-Anon conspiracies. As moderator of the first presidential debate, many right-wing social media users accused Wallace of being partial towards Democratic presidential nominee Joe Biden.

Wallace also made news back in July for aggressively fact-checking President Trump throughout a lengthy sit-down interview, something few other reporters have done over the last four years.