Was a post's prediction accurate for a 6.0 to 6.5 magnitude earthquake in the San Francisco Bay between October 1 and 2, 2020? No, as anyone in the Bay Area or keeping up with news can testify, that didn't happen. Earthquakes are still unpredictable. While this graphic contains very specific details that give the impression of this being a measured, factual forecast, this type of earthquake prediction is not based in science but is merely colorful tabloid entertainment.

The claim originated as a post published on October 2, 2020, by a Facebook page named "Free Earthquake Prediction" (archived here) with following text:

WARNING: 6.0 to 6.5 earthquake is likely in the San Francisco Bay during the next 36 hours - NOTE: risk in the Salton Sea area is falling -

Scientific earthquake forecasting models do not resemble this level of precision for timing, location or magnitude.

The Facebook page, Free Earthquake Prediction, has been publishing pseudoscientific earthquake predictions since July of 2015 and is associated with the website www.quakeprediction.com run by Luke Holmquist. The website was launched May 24, 2006, and has a disclaimer stating that it is not associated with the U.S. Geological Survey but does offer a link directly to the Official USGS website: 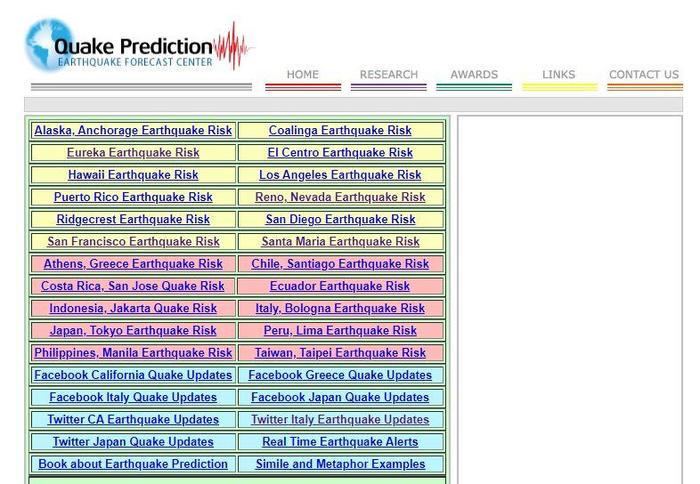 His predictions include technical sounding phrases such as "...you can see that on the map the risk level during the Napa earthquake was at about 10 variants and this one is 14, so it's an extremely strong blockage in the field of energy in California." His signature sign-off is a cordial and optimistic, "We'll talk to you after the quake."

The YouTube channel has been up since 2007 but only 10 videos show in the channel archive, all of them posted within the past three months. It appears that the prediction videos are usually removed soon after the predicted earthquakes fail to rumble.

The #1 item on the 'Earthquake Myths' portion of the FAQ on the USGS website is "Can you predict earthquakes?" The agency explains:

No. Neither the USGS nor any other scientists have ever predicted a major earthquake. We do not know how, and we do not expect to know how any time in the foreseeable future. USGS scientists can only calculate the probability that a significant earthquake will occur in a specific area within a certain number of years.

An earthquake prediction must define 3 elements: 1) the date and time, 2) the location, and 3) the magnitude.

Yes, some people say they can predict earthquakes, but here are the reasons why their statements are false:

The USGS very accurately records earthquakes once they occur. The agency monitors earthquake activity around the globe, and its measurements are frequently cited by news agencies reporting on earthquakes.

Holmquist, who seems comfortable with the fact that his craft is far outside accepted scientific practice, was interviewed for an article in the Alaskan publication, alaskasnewssource.com titled, "Scientists say don't be fooled by a website that claims to predict earthquakes." University of Alaska Fairbanks Earthquake Center seismologist Natalia Ruppert was also interviewed for the article.

Of course I want to help people," Holmquist told Channel 2 on Thursday. "If they get scared, they need to look at that 99 percent of people out there in the scientific community that disagree with me. If you want to feel comforted then listen to them. If you want to see the latest in earthquake forecasts, take it with a grain of salt or watch how accurate it is."

Back at the UAF Earthquake Center, Ruppert's stance is that this website and others like it should not be taken seriously. She says as of now, there is no reliable method to predict the exact location, time and magnitude of an earthquake. She says what is possible though, is a long term forecast in which scientists reconstruct the history of past significant earthquakes and extrapolate outward to make a very general prediction.