Are the Moderna and Pfizer-BioNTech COVID-19 vaccines gene therapy that alters recipients' immune systems, a potential Nuremberg Code violation for doctors and nurses to administer them without telling patients they are part of a drug trial, and are they killing or seriously injuring thousands of vaccine recipients? No, These claims are either untrue, made without evidence or leave out context: mRNA vaccination is not gene-altering therapy. The immune system alterations claim is missing context. The claim that the vaccinations are experimental is false, as is the Nuremberg Code claim. The claim that thousands have been harmed or killed is not supported by available evidence and mis-states what's in the government database of informal reports of patient observations post-vaccination.

The claims appeared in a video published on BrandNewTube on February 2, 2021 titled "Doctors and Nurses Giving the Covid-19 Vaccine Will Be Tried as War Criminals" (archived here) which included:

Incidentally, I'm well aware by the way that a decent part of the medical and scientific community doesn't believe that the stuff currently being promoted like a new brand of crisps isn't a vaccine at all. For the record, I agree with them. It's a form of gene therapy.

In recent months, Dr Coleman's videos have been targeted by trolls spreading lies, libels and misinformation and because of this, Dr Coleman has had to disable comments. We hope you understand. In an emotional video... 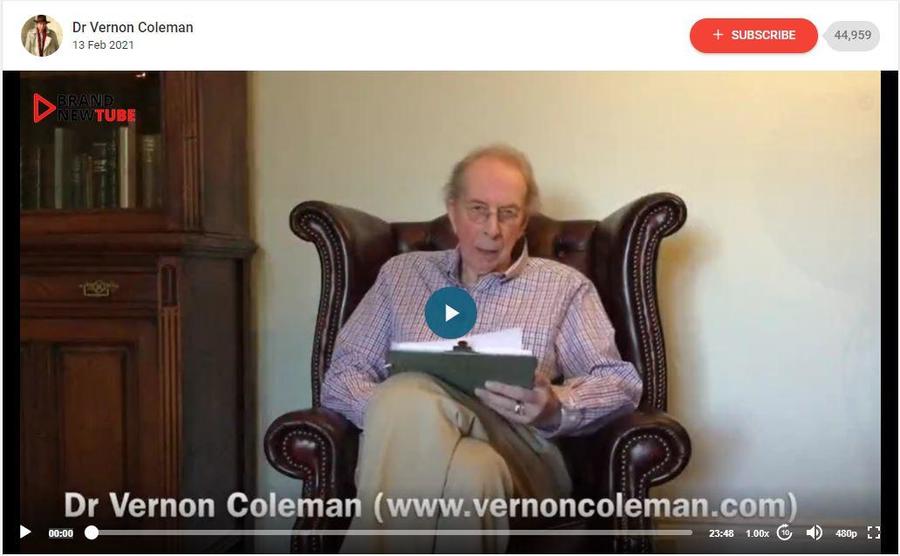 The FDA defines gene therapy as modification of a person's genes to treat or cure disease, which is not what messenger RNA vaccination does. A professor of medicine at UCLA told Lead Stories that there is no evidence the vaccines will permanently alter patients' immune systems in a negative way. He also explained that since Moderna and Pfizer-BioNTech vaccines have both been given Emergency Use Authorization (EUA) by the FDA, vaccination is no longer experimental. The Nuremberg Code, enacted in response to Nazi experimentation on genocide victims, governs human experimentation, not pandemic vaccination campaigns.

Throughout the 15-minute video, Dr. Vernon Coleman makes a series of claims related to what he simply describes as the "Covid-19 vaccine." It appears he is referring to the Moderna and Pfizer-BioNTech vaccines, since they are two mRNA shots. The video is one of several posted on brandnewtube.com that feature Dr. Coleman, a one-time general practitioner who relinquished his medical license, discussing the Covid-19 vaccine. According to his website, he has written over 100 books, including "Anyone Who Tells You Vaccines Are Safe and Effective Is Lying," and worked in hospitals and as a general practitioner, but "resigned from the health service on a matter of principle."

Here is what Lead Stories found regarding each claim:

False: "It's a form of gene therapy"

Incidentally, I'm well aware by the way that a decent part of the medical and scientific community doesn't believe that the stuff currently being promoted like a new brand of crisps isn't (sic) a vaccine at all. For the record, I agree with them. It's a form of gene therapy.

Vaccination, e.g. mRNA vaccination, does not alter any genes/DNA. It simply instructs our immune cells to make an immune response against a germ, or against a part or a product of a germ (e.g. a toxin - such as in tetanus or diphtheria).

No Evidence Cited: "There are very real risks of changes to the immune system of those having the vaccine."

At 4:26 in the video, Dr. Coleman says: "There are very real risks of changes to the immune system of those having the vaccine."

According to the CDC website, a COVID-19 vaccination does impact an individual's immune system. It teaches "your immune system how to recognize and fight the virus that causes COVID-19, and this protects you from getting sick with COVID-19."

Dr. Yang explained that there is no reason to believe the vaccine will damage or permanently alter the immune system in a negative way. He explained:

The vaccine is exposing the body to a foreign protein from the virus, by having some cells make that protein. Every time we are infected with a virus, whether it is one of the many common cold viruses, the herpes simplex type 1 virus that most of us have, etc, this is a natural process that the virus makes our cell produce foreign proteins and our immune system has evolved to cope with this exact situation. The vaccine just puts the immune system through its natural paces of precisely its biologic functional purpose.

Missing Context: "Anyone having the vaccine is therefore taking part in an experiment."

At 3:30 in the video, Dr. Coleman asserts the vaccine is still "experimental." He states:

The United States National Library of Medicine published details of the vaccine program currently underway and they say that the trial will last 2 years. Anyone having the vaccine is therefore taking part in an experiment.

He later directs viewers to clinicaltrials.gov to find the study, which he said is set to be completed January 31, 2023. It is unclear exactly which study he is referencing as the website has thousands of trials associated with COVID-19. By this logic - continued collection of data makes mRNA vaccine experimental - aspirin is still an "experimental" drug and as such is governed by Nuremberg-era warnings about human experimentation. Research on aspirin is underway in 2021.

But regardless of which study he is talking about, Moderna and Pfizer-BioNTech vaccines have both been given Emergency Use Authorization (EUA) by the FDA. The EUA permits use of new drugs or new uses of existing drugs during a public health emergency.

According to an email sent to Lead Stories by the FDA on February 12, 2021, determining whether to issue an EUA involves assessing the known and potential risks and benefits after testing on thousands of humans.

In the case of the COVID-19 vaccines that are currently authorized, FDA determined that the vaccines met the agency's rigorous scientific standards for safety, effectiveness and manufacturing quality needed to support emergency use authorization. However, the vaccines are considered investigational products as they have not been licensed (approved) by FDA.

But the agency clarified that individuals who receive these vaccines are not participating in a clinical trial.

False: "So, legally, all those people giving vaccinations are war criminals."

At 6:20 in the video, Dr. Coleman references the Nuremberg Code, and highlights a part about the necessity for voluntary consent. He states:

That means that patients must be told that they're taking part in a trial and they must be warned of all the possible adverse events. That's what informed consent means. How many doctors and nurses jabbing people with this stuff are telling patients that it's a trial. How many are giving people the information they need to make a valued judgement. I would guess somewhere close to none. So, legally, all those people giving vaccinations are war criminals.

But, as explained in a previous Lead Stories debunk, the Nuremberg Code regulates experimentation on humans, not the use of approved vaccines.

Dr. Otto Yang, professor of medicine in the division of infectious diseases and of microbiology, immunology, and molecular genetics at the David Geffen School of Medicine at UCLA, said in an email to Lead Stories on February 11, 2021:

But it is worth noting that, according to the FDA, both Pfizer-BioNtech and Moderna vaccination providers are expected to provide a fact sheet to those receiving the vaccine. The sheet should include "the investigational nature of the product, the known and potential benefits and risks, available alternatives, and the option to refuse vaccination."

Misuse of Unconfirmed Reports: "thousands of people who've had the vaccine have died or been seriously injured by it."

At 5:52 in the video Dr. Coleman claims that "thousands of people who've had the vaccine have died or been seriously injured by it."

While the Vaccine Adverse Event Reporting System has thousands of reports of health issues post-vaccination, the system itself warns that these reports alone can't "be used to determine if a vaccine caused or contributed to an adverse event or illness"

Dr. Yang told Lead Stories that this is not true. He said:

On February 12, 2021, Lead Stories searched the database and found thousands of adverse events related to the COVID-19 vaccines that ranged from dizziness to death. But the site clarifies that these reports alone can't "be used to determine if a vaccine caused or contributed to an adverse event or illness."

The reports may contain information that is incomplete, inaccurate, coincidental, or unverifiable. Most reports to VAERS are voluntary, which means they are subject to biases. This creates specific limitations on how the data can be used scientifically. Data from VAERS reports should always be interpreted with these limitations in mind.

Lead Stories reached out to Dr. Coleman on what appears to be his Facebook page and an email address associated with his website on February 12, 2021, asking him which vaccine he is referencing as well as other queries related to his claims. We will update, if appropriate, when he responds.