Did all Spirit Airlines flight attendants quit their jobs and did the airline cancel all its flights as of August 3, 2021? No, that's not true: Although Spirit experienced significant delays and cancellations in the first days of August 2021, the claims are false according to a Spirit spokesperson and the Association of Flight Attendants (AFA), the union that represents Spirit's flight attendants.

The claims appeared in an August 3, 2021, Facebook post. The user appeared to be sharing the experiences of another Spirit customer who planned to fly out of Puerto Rico but had their flight canceled along with other difficulties. The first version of the post began:

If you are flying anywhere on spirit airlines, all flights have been canceled. All flight attendants have quit so therefore no planes are available to fly across multiple states.

A screenshot showing that this was the first version of the post is included below: 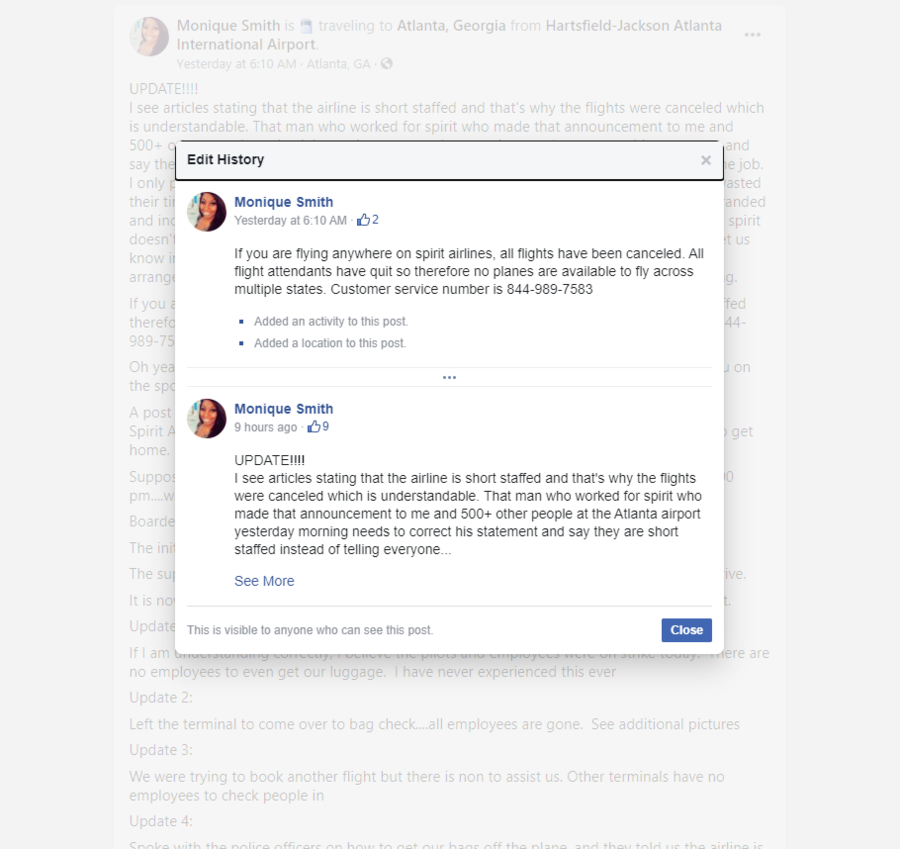 The Facebook user updated their post to correct the claims. A screenshot of the correction is included below:

However, the correction did not stop the claims from spreading to Twitter. An example of a tweet (archived here) repeating aspects of the claims reads:

This Spirit Airlines PR thing is crazy! Like all the staff just quit or on strike and hella folks are stranded in Puerto Rico 🇵🇷.

In an email to Lead Stories on August 4, 2021, Erik Hofmeyer, a spokesperson for Spirit, denied the claims saying:

We are experiencing operational challenges in some areas of our network. Before going to the airport, check your email and current flight status here: https://t.co/yuPJDPxeNu. The fastest way to receive assistance is to visit our webchat: https://t.co/QnlZcUCMtk. pic.twitter.com/E176h8KHjN

In an email to Lead Stories on August 4, 2021, Taylor Garland, a representative of the AFA communications team, said:

This is completely false. Please see our statement directly addressing this rumor

Garland directed Lead Stories to this statement (archived here) from the AFA-CWA that reads:

'Spirit Airlines is experiencing operational issues causing flight delays and cancellations due to weather, schedule month change over, and IT outages.

'A few news outlets have incorrectly reported that this may be due to a strike. This is not true. There is no flight attendant strike. Crews are not the issue.

'Management is proactively cancelling flights today to recover the operation and prevent further disruption for passengers.'

While the claims all flight attendants quitting their jobs and cancellations of all flights were false, news coverage of Spirit Airlines indicated its "operational challenges" continued through August 4, 2021.