Did actor Danny DeVito die, surrounded by family? No, that's not true: One of DeVito's public relations representatives told Lead Stories she was "with Danny doing an interview at this very moment, thus I can tell you quite definitively that is untrue." The story came from a liberal satirical website that is part of a network whose purpose is to mislead conservatives by convincing them to share fabricated stories clearly marked as satire.

The article from ConservativeTears.com was published in November 2021 (archived here). It opened:

Daniel Milenskovich Wilekenston DeVito, 74, passed this morning surrounded by his family. He had been battling an undisclosed illness for some time.

A spokesman for the cats said they were pleased that Mr. DeVito had alerted the building manager that he believed he was dying, allowing paramedics to remove his body before the family got hungry. 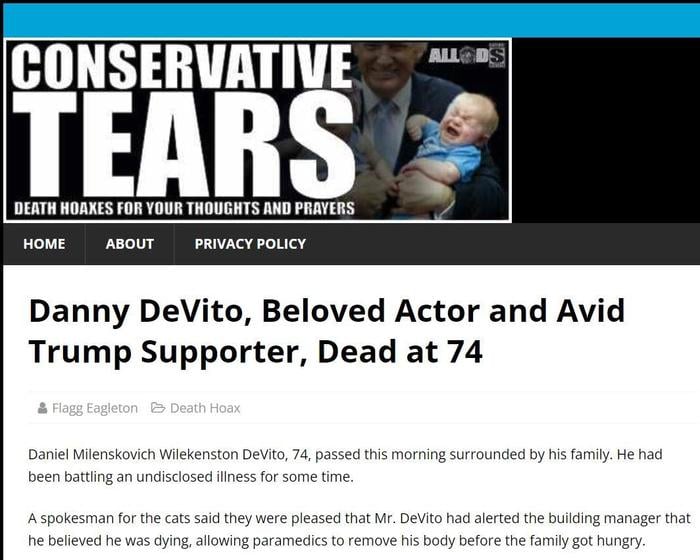 The site is part of the "America's Last Line of Defense" network of satire websites run by self-described liberal troll Christopher Blair. He runs several websites and Facebook pages that mostly publish made-up stories with headlines specifically created to trigger Republicans, conservatives and evangelical Christians into angrily sharing or commenting on the story on Facebook without actually reading the full article.

Articles from Blair's sites frequently get copied by "real" fake news sites that omit the satire disclaimer and other hints the stories are fake. One of the most persistent networks of such sites is run by a man from Pakistan named Kashif Shahzad Khokhar (aka "DashiKashi") who has used hundreds of such stolen stories on conservative and right-wing Facebook pages in order to profit from the ad revenue.

When fact checkers point this out to the people liking and sharing these copycat stories, some of them get mad at the fact checkers instead of the foreign spammers or the liberal satire writers.

Regarding the merit of this claim, Lead Stories contacted Stan Rosenfield of the entertainment public relations firm, Rosenfield Media Group (RMG), who responded in a November 22, 2021, email:

In the same email thread, Katie Feldman, senior publicist at RMG, followed up with:

I am with Danny doing an interview at this very moment, thus I can tell you quite definitively that is untrue.