Was rapper Travis Scott arrested after his Astroworld festival concert, where eight people died? No, that's not true: The Houston Police Department told Lead Stories on November 10, 2021, that the claim was not accurate. Scott also tweeted a statement on November 6, 2021, the day after the festival, at which eight people were killed and 17 were hospitalized, with hundreds more injured. The online source of the claim -- Conservative Beaver -- is known for creating fictional articles about public figures.

Travis Scott has been arrested and charged for conspiracy to commit murder after his AstroWorld concert featured a Satanic ritual that saw eight people murdered and many more injured. 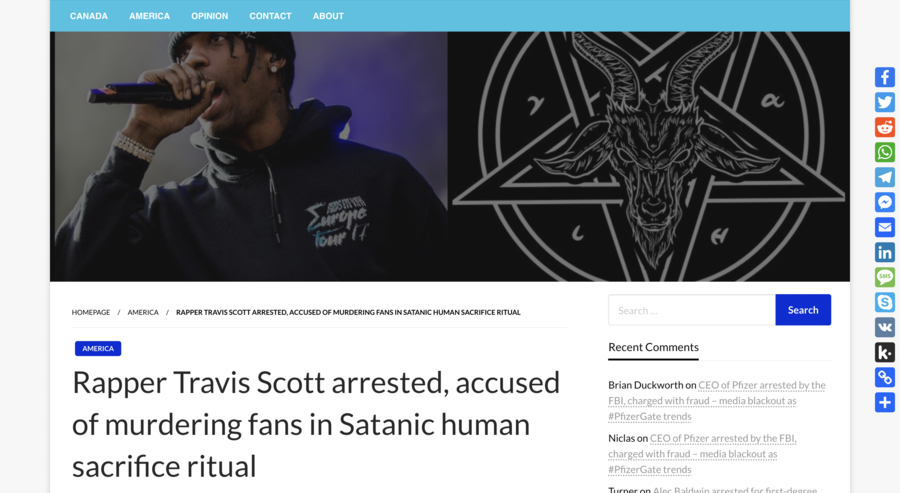 Scott had not been arrested at the time of this writing. There is no public evidence supporting the Conservative Beaver's claim. Asked if Scott had been arrested after his Astroworld festival, a Houston Police Department spokesperson responded on November 10, 2021, with a curt "No."

On November 6, 2021, Scott tweeted a screenshot of a typed statement about the Astroworld Festival. It read:

I'm absolutely devastated by what took place last night. My prayers go out to the families and all those impacted by what happened at Astroworld Festival.

Houston PD has my total support as they continue to look into this tragic loss of life.

I am committed to working together with the Houston community to heal and support the families in need. Thank you to Houston PD, Fire Department and NRG Park for their immediate response and support.

Lead Stories has debunked multiple Conservative Beaver articles. Here is a debunk of the claim that Brian Laundrie was found alive in Mexico. Here is our article stating that there was no evidence that the CEO of Disney had been jailed on child sex abuse charges.