Did Angelina Jolie give a "rare interview" where she blamed Brad Pitt's drinking for their divorce and then touted a keto weight loss line? No, that's not true: The Oscar-winning movie star never gave an interview where she denigrated her ex and shilled for a weight-loss line at the same time. The fake interview is actually an advertisement for a weight loss line misleadingly appearing to be a news article. The purported "rare interview" was previously published verbatim in 2019 but there is no evidence that Jolie ever gave the interview. There is no proof that Jolie owns a keto weight loss line.

The claim appeared as an article (archived here) published by Entertainment Today Insider News on January 13, 2022, under the title "In Rare Interview, Angelina Talks About Her Split From Brad Pitt, Her Family and The Secret To Her Slim Figure." It opened:

Angelina Jolie reveals the surprising reason she split from Brad Pitt--but she may actually have bigger things in mind. 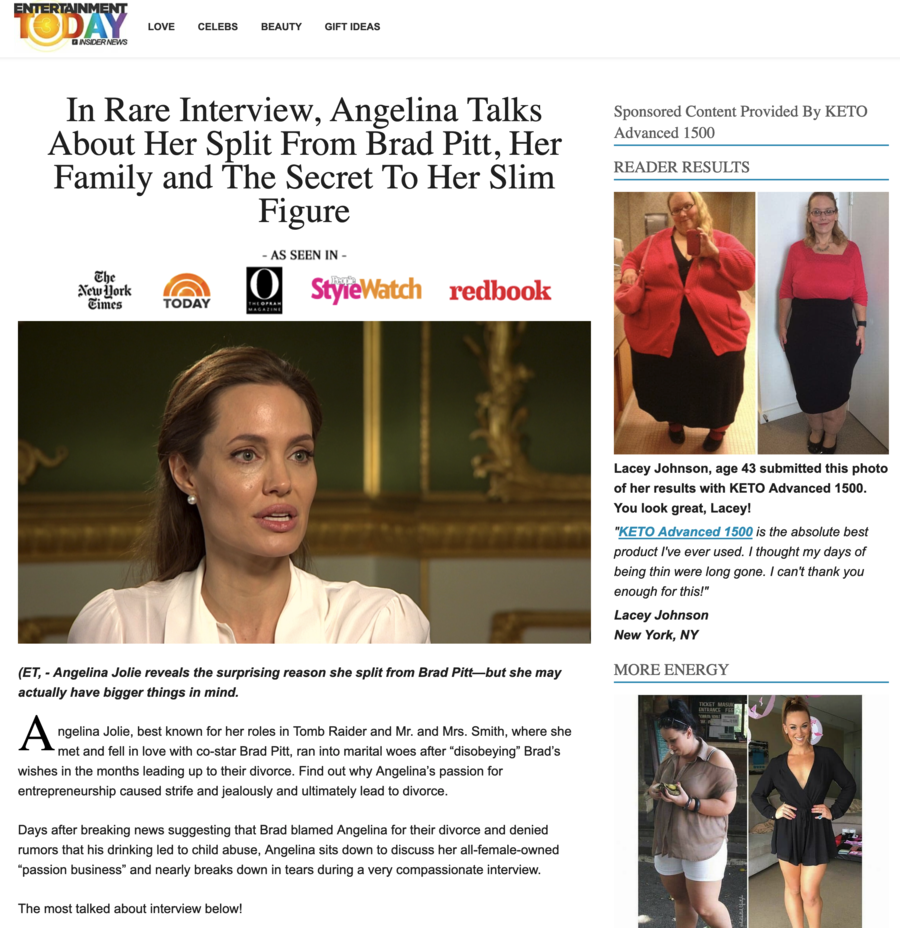 "Entertainment Today Insider News" is not a legitimate website. A Google search returned no matches for the logo shown at the top of the fake story. The logo links to a site selling "KETO Advanced 1500" diet pills.

In the article, Jolie is allegedly quoted denigrating her ex, Pitt, and explaining reasons for their split, and purportedly linked that with claims to have her own "KETO Advanced 1500" weight-loss company:

A relationship is never black-and-white and while there are dozens of things that Brad and I simply will never see eye-to-eye on, the differences in raising kids ultimately forced us to split-up. His drinking became a problem and he started to lose opportunities in Hollywood. He even was jealous that I wouldn't allow him to promote Keto Pure, as I wanted to keep it fully female managed. Ultimately, he is the father of my children so I won't say too much.

Jolie is not shown anywhere on the KETO Advanced 1500 site in pictures or in language regarding the weight-loss product.

A Google search of "Angelina Jolie KETO Advanced 1500" fails to yield any matches and only returns links to websites selling the weight loss pills. Jolie's interviews are often picked up by multiple outlets, but this one, with the shocking claims about Pitt and about her owning her own weight loss line company, was not found anywhere.

The image of Jolie used in the article appears to be from a video interview she did with CNN's Christiane Amanpour in 2014.


The article ends with this purported quote:

Angelina: I hear that often, which is great! It's all about feeling confident in your own body. All of my Hollywood friends fell in love with Keto Pure Salma Hayek and Angelinase Witherspoon are actually brand ambassadors.

Lead Stories has reached out to Jolie's attorney and will update the story when a response is received.