Does joining The Satanic Temple give a member legal protection to terminate a pregnancy? Not necessarily: According to legal experts, it could -- but joining "opportunistically" probably won't be applicable. Or as Mark Tushnet, the William Nelson Cromwell Professor of Law emeritus at Harvard Law School, wrote in an email to Lead Stories on May 4, 2022, such a claim is "not quite false [technically accurate in at least some cases] but more than a little misleading."

The claim appeared in a Facebook post on May 4, 2022, with the caption "Join the satanic temple!" It opens:

I joined the Satanic Temple today to protect my bodily autonomy. It's free to sign up online if anyone is interested. thesatanictemple.com 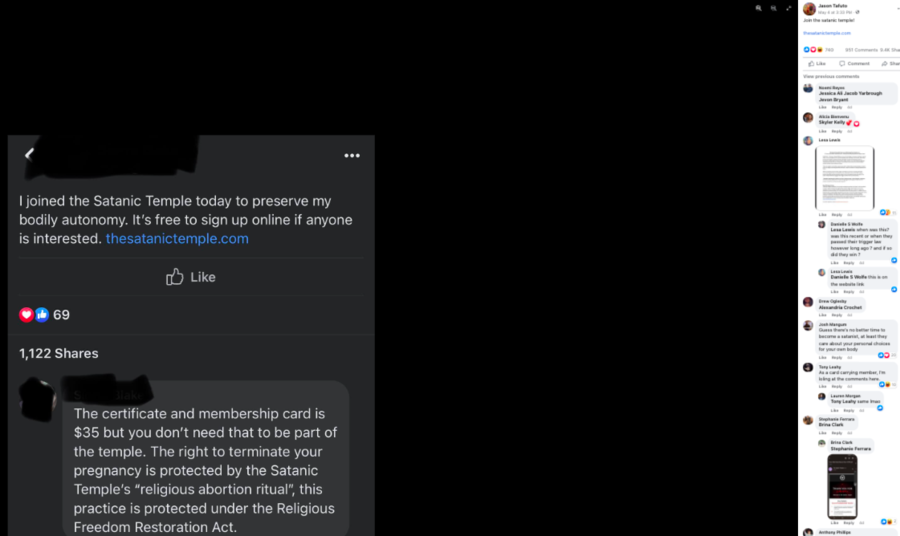 Text in the post said, "The right to terminate your pregnancy is protected by the Satanic Temple's 'religious abortion ritual,' this practice is protected under the Religious Freedom Restoration Act."

The Satanic Temple, a Salem, Massachusetts-based organization, claims abortions for its members would be a sacred ritual and protected under the Religious Freedom Restoration Act (RFRA).

Founded in 2013, The Satanic Temple received tax-exempt status in 2019 by the IRS. It's a "non-theist" religion, meaning it's not based on a belief in a god or gods. The group's mission, according to its website, is to:

The group says on its website that it has "provided religious exemption and legal protections against laws that unscientifically restrict women's reproductive autonomy."

Since Supreme Court Justice Samuel Alito's leaked draft decision on Roe v. Wade was published by Politico on May 2, 2022, there has been a surge of social media posts urging people to join The Satanic Temple, such as these Twitter posts here and here.

In an email to Lead Stories on May 11, 2022, Ric Simmons, the Chief Justice Thomas J. Moyer Professor at the Moritz College of Law at Ohio State University, wrote that RFRA would not likely be a substantial enough claim:

Laws that ban or restrict abortion apply indiscriminately to everyone, so there would be no religious exemption to them under the first amendment, and it would be difficult to argue that obeying the law would create a substantial burden to exercising their religion (it may, of course, impose a substantial burden on women generally, but that is not RFRA's test).

Samuel D. Brunson, the Georgia Reithal professor at the Loyola University Chicago School of Law, wrote in an email on May 11, 2022, that he's "pretty sure that the Satanic Temple is positioning itself to challenge anti-abortion legislation in various states."

The federal Religious Freedom Restoration Act, as well as most (if not all) state-level RFRAs don't say that the government cannot infringe on a person's free exercise rights under any circumstance at all. Rather, they say that to infringe on an individual's religious practice, the government must have a compelling governmental interest and the law it enacts must be the least restrictive means of furthering that interest.

Is it possible that a member of the Satanic Temple can successfully challenge laws against abortion based on a religious belief in bodily autonomy? Yes, it is possible. But I suspect that the state would have the better argument.

As much as we want an easy, costless way to deal with potential anti-abortion laws in a post-Roe world, something that seems easy and slick and too cute by half is probably not going to work. Protecting a woman's right to choose is, rather, going to require us to do the hard work of demonstrating, writing to representatives, and voting for people (at the federal and state levels) who will ensure that that right is protected.

the Satanic Temple's approach is clever. And it highlights a real inconsistency among people who insist both on untrammeled religious liberty and prohibitions on abortion. But joining the Satanic Temple is unlikely to allow an individual in, for instance, Texas or Louisiana ignore state abortion bans.