Did the government ask scientists to find another use for fluoride, which had been used to make nuclear weapons, pesticides and herbicides, because 'there was too much of it"? Did someone "decide" that it would strengthen teeth -- and then fluoride was added to toothpaste, mouthwash and eventually the water supply? No, that's not true: This is not the history of water fluoridation in the United States. The idea that fluoride strengthened teeth was not a decision, it was a discovery that developed over the course of half a century, starting in 1901 through observation and scientific research of the dental condition of certain populations and the fluoride levels in their local natural groundwater.

Fluoridation of the public water supply was first introduced in Grand Rapids, Michigan in 1945. After years of research, the patented formula for "Crest with Flouristan" was introduced by Proctor and Gamble in 1956. Mouthwash with fluoride came some time after that.

The claim is presented in a short video featuring an unidentified woman speaking. Some copies of this video are very poor quality and cut short, only 30 seconds. One of the copies of the video posted on Facebook on March 3, 2017, has better image quality and is 1:20 minutes long. It is captioned "The truth about Fluoride Shocking video about fluoride!..." This is the transcript of the video:

During World War Two, they actually used massive quantities of fluoride in the manufacture of bomb grade uranium and plutonium for nuclear weapons. And it was also put into the pesticides and the herbicides, but there was too much of it. The government asked scientists to find another use for it. That's when they decided that it would help strengthen teeth. So it started going into the toothpaste and the mouthwash and eventually into our water supply. The interesting thing is only 10 percent of the water in the UK has fluoridated. 98 percent of Western Europe rejected it on the grounds that it doesn't work -- plus, they thought that it was morally reprehensible to medicate citizens without their consent. So fluoride is definitely something that we need to avoid as a human race but particularly in children, because if they ingest it and swallow too much of it it can be fatal. 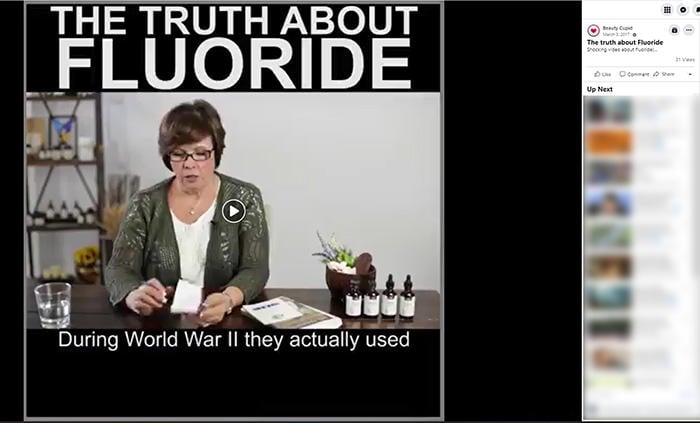 The focus of this fact check is not to evaluate the arguments for or against the fluoridation of the public water supply, only to establish the timeline of the discovery of the role of fluoride in dental caries prevention.

The Centers for Disease Control and Prevention has a portal introducing basics about Community Water Fluoridation with links to more in-depth articles and FAQs.

The Agency for Toxic Substances and Disease Registry produced a public health statement in September 2003 that reviews the toxicological profile for fluorides, hydrogen fluoride and fluorine. It explains some of the uses for and dangers of the various forms of fluoride, this naturally occurring element from the earth's crust, found in water, air, plants and animals.

"The Story of Fluoridation" is a history article from the National Institute of Dental and Craniofacial Research. It tells the story of a young dentist, Frederick McKay, who moved to Colorado Springs, Colorado in 1901 and made the observation that the local population commonly had brown stained teeth and also seemed resistant to dental caries. This staining became known as the "Colorado Brown Stain" but Colorado was not the only place where this phenomenon was observed. In 1923 McKay visited Oakley, Idaho where the town had recently installed a pipe that brought the community water from a new source nearby and not long after, the brown stains were noted on the teeth of the children.

Once it was understood what caused the fluorosis, studies were supported by Dr. H. Trendley Dean, head of the Dental Hygiene Unit at the National Institute of Health. Teams went out to see if they could determine the level of natural fluoride in community water where the cavity-preventing benefits were seen without the cosmetic issue of the staining. That level was found to be 1.0 parts per million:

In 1945, Grand Rapids became the first city in the world to fluoridate its drinking water.The Grand Rapids water fluoridation study was originally sponsored by the U.S. Surgeon General, but was taken over by the NIDR shortly after the Institute's inception in 1948. During the 15-year project, researchers monitored the rate of tooth decay among Grand Rapids' almost 30,000 schoolchildren. After just 11 years, Dean- who was now director of the NIDR-announced an amazing finding. The caries rate among Grand Rapids children born after fluoride was added to the water supply dropped more than 60 percent. This finding, considering the thousands of participants in the study, amounted to a giant scientific breakthrough that promised to revolutionize dental care, making tooth decay for the first time in history a preventable disease for most people.

An article on indianapublicmedia.org titled, "The Invention of Fluoride Toothpaste" tells the story of how Procter & Gamble paid a team of scientists at Indiana University to develop a stannous fluoride compound:

Crest was unveiled at the start of 1956 with a memorable ad campaign featuring children's portraits by Norman Rockwell captioned with the boast, 'Look, Mom! No Cavities!' In 1960, the brand distinguished itself further upon receiving the first Seal of Acceptance from the American Dental Association. IU held the patent for Crest's formulation from 1958-1975, during which time Procter and Gamble paid royalties to the university for exclusive use of the compound. Those funds helped to establish the Oral Health Research Institute at the School of Dentistry in Indianapolis. The institute, built in 1968, is a world-renowned product-testing site.

Embedded below is a 1956 Crest toothpaste commercial:

Lead Stories was not able to find a definitive timeline or inventor of a fluoride mouthwash, but did find a November 25, 1979, article about a dentist, Thomas E. Butt of Wytheville, Virginia, who believed he thought of it first in 1957.