Did Melania Trump just announce her divorce? No, that's not true: There have not been any public announcements by the former first lady or former President Donald Trump regarding a divorce as of September 27, 2022. No news outlets have reported that Melania Trump made any such announcement.

The claim appeared in a video on Facebook on September 24, 2022, under the title "Melania just ANN0UNCED her DIV0RCE to former guy in an interview, Former guy LAM£NTS on DISC0VERING." It opened:

In an open meeting ensured to stand out as truly newsworthy, Melania Trump uncovered that she wanted to get a separation by simply mulling over everything. 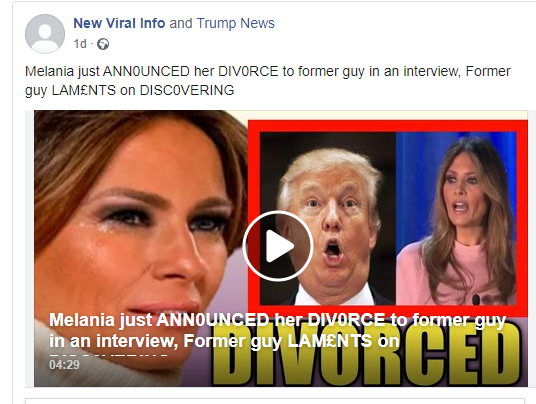 Opening with a "Breaking News" chyron, the roughly 4½-minute-long video starts with a robotic voice that mispronounces her first name. It claims:

While focusing on that she had no designs to separate from her significant other Mrs. Trump said that doing so would require much more than having the thought in my mind.

Lead Stories has previously reported on another Trump-themed video from New Viral Info that appears to use article spinning, a technique that employs a word-substitution program to "spin" versions of content published elsewhere. Such programs substitute similar words or phrases for the published content, but with distorted, often incomprehensible, results.

As of September 27, 2022, Melania Trump had not released a statement or given an interview in which she announced she was divorcing Donald Trump, whom she married in 2005.

News of a former president and first lady divorcing would have been reported by major news outlets, but an online search resulted in no such stories.

The absence of corroborating reports about what would be an internationally noteworthy event suggests this claim is baseless.

The 4½-minute video, which shows a series of stock images of Donald Trump, appears to be based on satirist Andy Borowitz's September 23, 2022 New Yorker column "Melania Wishes She Could Get Divorced Just by Thinking About It."

The video's narration states: "While focusing on that she had no designs to separate from her significant other Mrs. Trump said that doing so 'would require much more than having the thought in my mind.'"

That echoes a sentence in Borowitz's column that read:

While stressing that she had no plans to divorce her husband, Mrs. Trump said that doing so would require 'a lot more than having the idea in my head.'

Another sentence in the video is: "I live in a lovely home with every one codes a lady could need." This is very close to the New Yorker line: "At the conclusion of the interview, Mrs. Trump emphasized, once again, that she was happy in her marriage to Donald Trump. 'I live in a beautiful home with all the nuclear codes a woman could want,' she said."

The video "coverage" of Melania Trump ends after 53 seconds. The remainder of the video discusses the court fight Donald Trump is facing over the documents the FBI seized from his Mar-a-Largo home on August 8, 2022.

The video titled "trump terminates marriage with melania In a devastating manner!" shows a photo of Melania Trump, but stock images of Donald Trump again make up most of the footage. The video's narration of the divorce appears to be a spun version of an Epic Stream article titled, "Melania Trump, Donald Trump Getting Divorce? Actress Patricia Arquette Tweets About Former First Couple's 'Divorce Countdown." The robo voice directly quotes parts of the article and paraphrases the rest.

The Melania Trump "divorce" portion of the video ends at 1:52 and the rest again discusses the legal fight over the documents taken by the FBI from the ex-president's Florida home in August.

Additional Lead Stories fact checks related to Donald Trump and his family can be found here.