Did Russians fleeing President Vladimir Putin's partial mobilization of troops for deployment in Ukraine immediately form a "35KM" (about 21.7 miles) line on September 21, 2022 at the Finnish border? No, that's not true: The viral video started circulating online two days before this announcement. According to Finnish officials, border checkpoints saw a slight increase in traffic on September 21, 2022, but the lines didn't get even close to the lengths described by social media.

The claim appeared in a tweet on September 21, 2022 (archived here), the day Putin addressed the nation, announcing what his decree described as a "partial mobilization." The tweet contained a video of multiple cars stuck in traffic. Its caption said:

#Breaking: just in - The traffic jam at the border with #Russia/#Finland has pilled up to 35KM and is rising by the hour, it is the only border who is still open for Russian civilians with shengen visas, after #Putin announced he will send 300.000 new troops to #Ukraine. 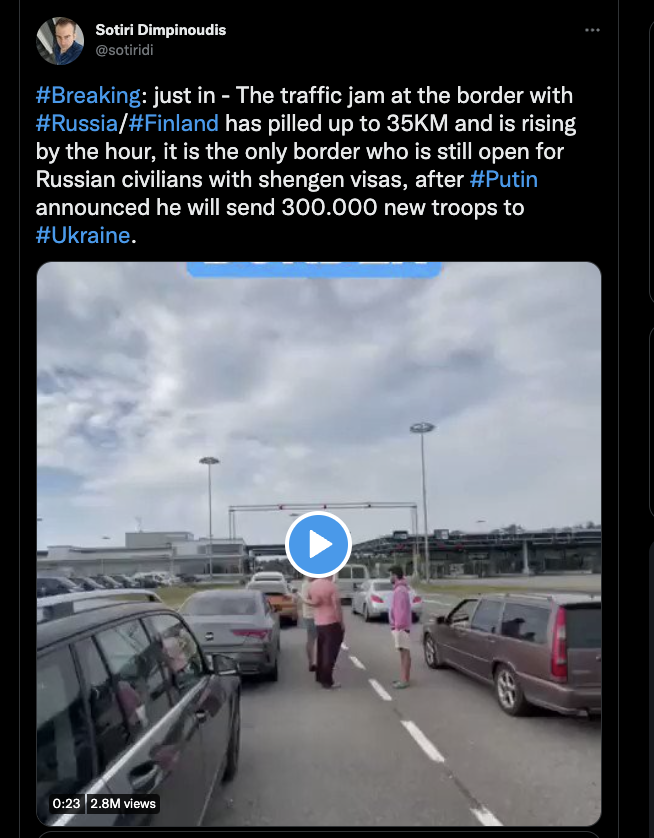 On the same day, September 21, 2022, the Finnish Border Guard quickly published a statement on Twitter, refuting the claim in English:

Situation at Finland's borders has not changed with the announcement of Russian moilization. There are videos circulating on social media, at least some of which have already been filmed before and now taken out of context. There is incorrect information in circulation.

According to the agency, 4,824 Russians crossed the Finnish border on that day. This number was 1,691 persons more than on the same day during the previous week. Finnish authorities emphasized that the flow remained significantly less intense than what it was before the COVID-19 pandemic.

A Finnish Foreign Affairs Ministry official, Ville Cantell, who oversees ministry communications on development policies and foreign trade, also confirmed on Twitter that there was no heavy traffic:

Information of long lines on border between Russia and Finland circulating is not correct. Situation at border normal. Videos are not of current situation. #Russia #Finland #Ukraine #disinformation

The claim began circulating on TikTok and YouTube on September 19, 2022, two days before Putin's televised address, making it impossible to be a reaction to the announced mobilization.

The video in question was taken at the checkpoint in Vaalimaa, Finland. On the day of writing, the temperature in this location fluctuated between 9 and 13 degrees Celsius (between 48 and 55 degrees Fahrenheit), making it a little cold to wear the shorts and T-shirts seen in the opening shot of the video. That suggests the video could have been shot in a different season.

According to the Associated Press, the video was posted on TikTok on August 29, 2022 by a person who calls themself Igor Parri. The user told AP that the clip showed a "quite typical line."

One of the six weather cameras located in Vaalimaa did capture some traffic in the past 24 hours, but the recording also demonstrated that the line moved promptly. At the time of writing, the same cameras showed empty roads: 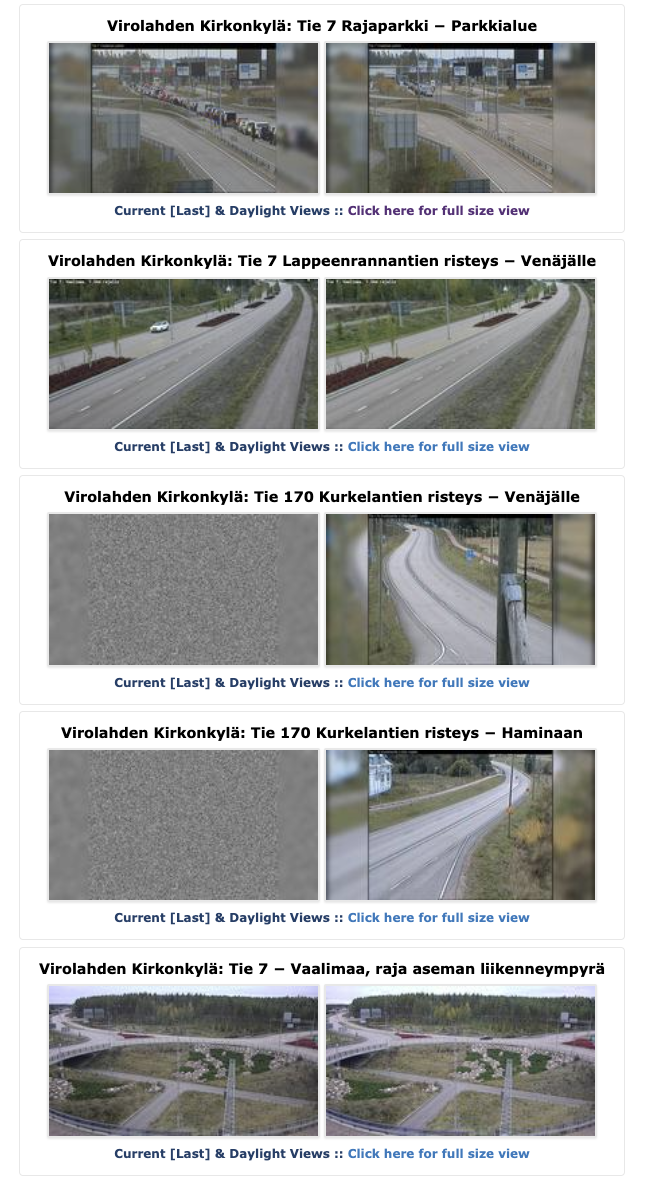 Other Lead Stories fact checks about the 2022 conflict between Russia and Ukraine can be found here.