Does a cameraman at the U.S. Capitol on January 6, 2021, bear a striking resemblance to David DePape, the man arrested for breaking into the home of Paul Pelosi and attacking him with a hammer? And was this cameraman working with Alexandra Pelosi filming a documentary on January 6, 2021? No, none of that is true: The cameraman on the right was not filming the U.S. Capitol on January 6, 2021. The man in both photos is David DePape. The two photos were taken days apart in 2013, one in Berkeley, California, on December 13, 2013, and the other outside the San Francisco City Hall on December 19, 2013, at the nude wedding of Gypsy Taub.

The text included in the Telegram screenshot reads:

Left is Paul's Friend
Right is cameraman from J6
Hmmmmmm? 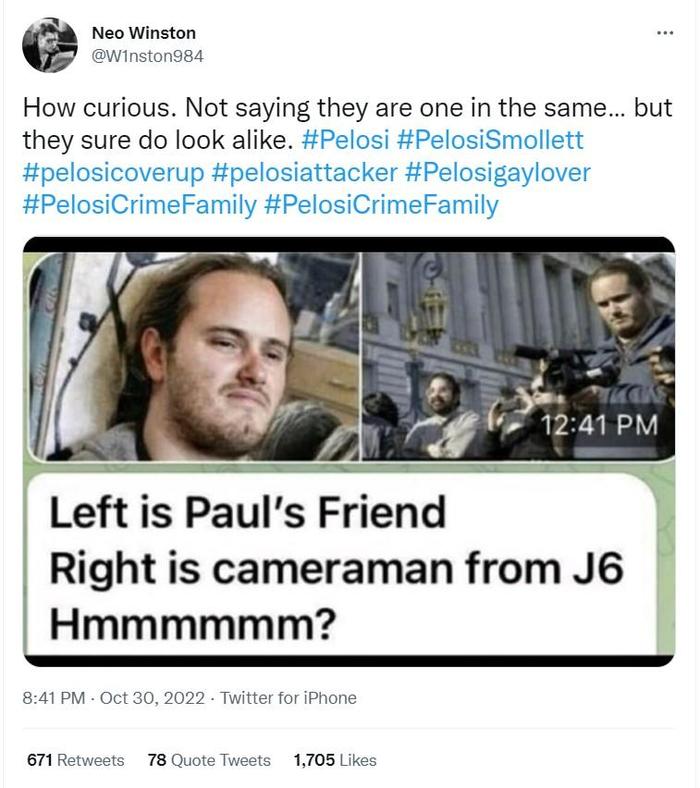 Additional posts using the same screenshot had captions that took the false assertion regarding the cameraman even further. A Reddit post that has been removed from r/conspiracy (which describes itself as "The conspiracy subreddit") implied that on January 6, 2021, the cameraman in the photo had been working with the daughter of House Speaker Nancy Pelosi, documentary filmmaker Alexandra Pelosi, who was filming at the Capitol on January 6, 2021. Some made the baseless suggestion that Nancy Pelosi owed DePape money for "the assistance he and his friends provided on J6." Another Facebook post obscured the traces of the original Telegram post with a new border and labeled the photos "Paul's Friend" and "J6 Cameraman." A post on the Facebook page Bikers For America was captioned early on November 1, 2022:

BOTH used the pic on the left during their broadcasts this morning. Yet FOX News continues to use the left's narrative about this incident

Now we KNOW why he must be silenced! 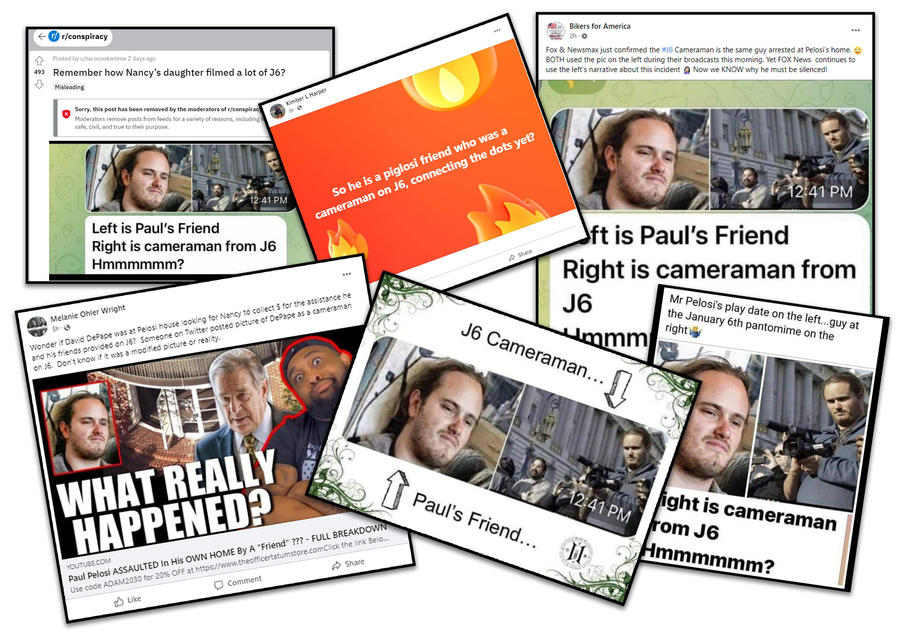 The inset in the composite image below, shows the cameraman image of DePape that appears on the right side of the Telegram screenshot. A Google Street View image of the San Francisco City Hall (below) shows the distinctive gray and gold metalwork and lamps, the stone columns and ornate pediment. This matches the buildings in the background of the cameraman image. 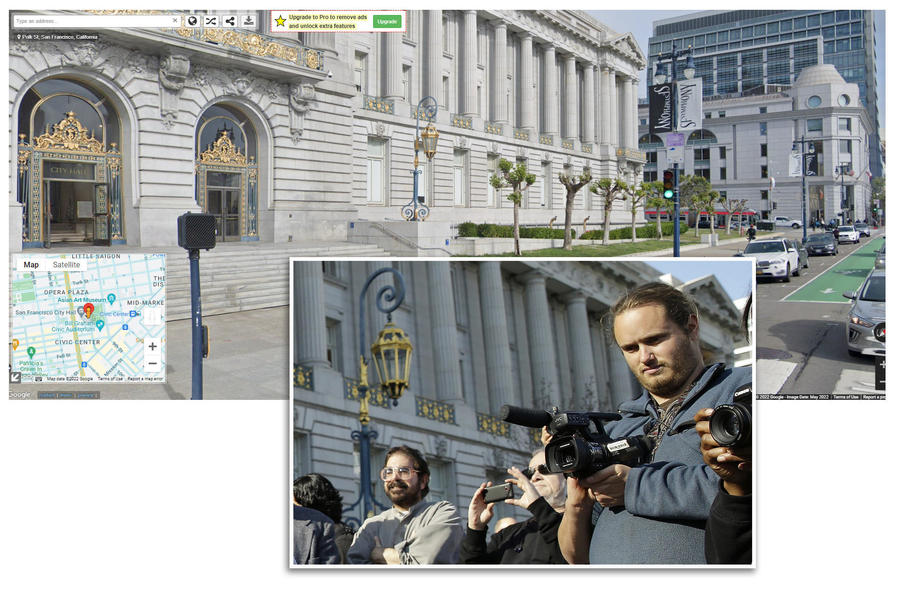 The 2013 cameraman photo of DePape appears in a recent October 29, 2022, apnews.com article titled, "Suspect in assault at Pelosi home had posted about QAnon." It features a slideshow of eight photos. The first and seventh photos were taken by press photographer Eric Risberg at the time of the nude wedding and were captioned:

Photo 1 of 8
David DePape, center, records Gypsy Taub being led away by police after her nude wedding outside City Hall on Dec. 19, 2013, in San Francisco. DePape is accused of breaking into House Speaker Nancy Pelosi's California home and severely beating her husband with a hammer. DePape was known in Berkeley, Calif., as a pro-nudity activist who had picketed naked at protests against local ordinances requiring people to be clothed in public. (AP Photo/Eric Risberg)

Photo 7 of 8
David DePape, right, records the nude wedding of Gypsy Taub outside City Hall on Dec. 19, 2013, in San Francisco. DePape is accused of breaking into House Speaker Nancy Pelosi's California home and severely beating her husband with a hammer. DePape was known in Berkeley, Calif., as a pro-nudity activist who had picketed naked at protests against local ordinances requiring people to be clothed in public. (AP Photo/Eric Risberg)

The photo of DePape, which appears on the left in the Telegram post, is also featured in this slideshow. It is captioned:

Photo 4 of 8
David Depape is shown in Berkeley, Calif.,on Friday, Dec. 13, 2013. An intruder attacked and severely beat House Speaker Nancy Pelosi's husband with a hammer in the couple's San Francisco home early Friday, Oct. 28, 2022, while searching for the Democratic leader. Police were called to the home to check on Paul Pelosi when they discovered the 82-year-old and the suspect, Depape, both grabbing onto the hammer, said Police Chief William Scott.(Michael Short/San Francisco Chronicle via AP)

Another photo of the wedding appears in a slideshow in a December 19, 2013, sfgate.com article titled, "S.F. couple pulls off their nude wedding." DePape can be seen filming in the background. Photo 19 of 24 in the slideshow is captioned: 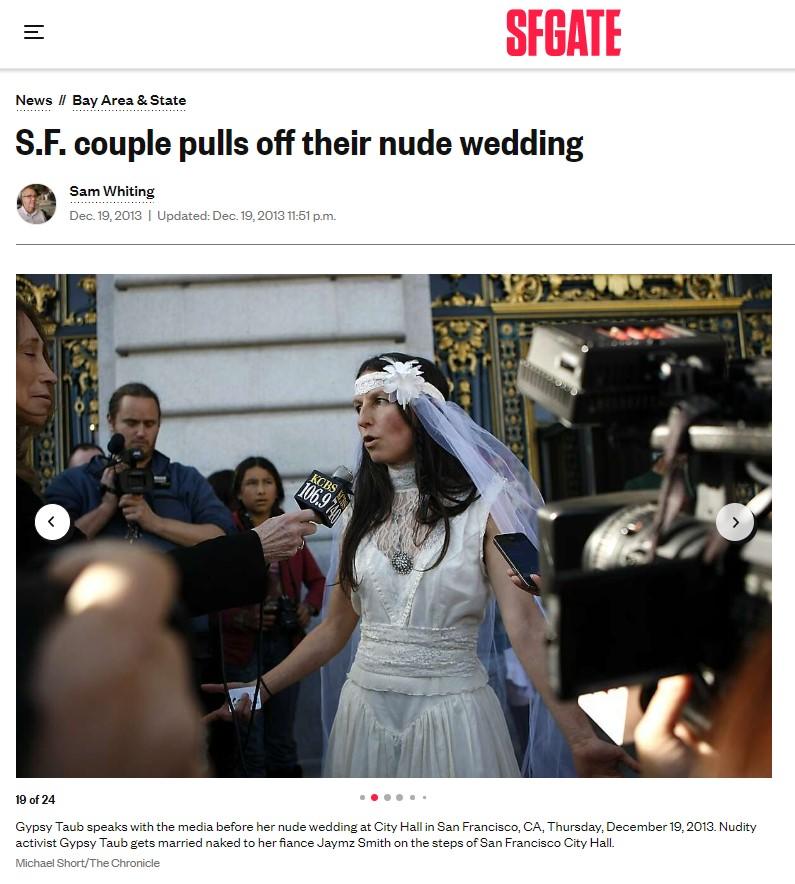 Lead Stories has debunked several false narratives involving the early morning attack on Paul Pelosi on October 28, 2022: a photo of a suspect in another crime misrepresented as the attacker, misinterpretation of the internet archive dates recording DePape's two websites, and rumors that DePape was in the Pelosi home because he was a male prostitute.