A fake story alleges that a non-existent "Democrat Senator" -- and using a photo of a real U.S. senator -- was "caught with a dead prostitute. Lead Stories' Trendolizer system detected the scurrilous hoax, published by a known "satire site," as trending on social platforms early Wednesday. 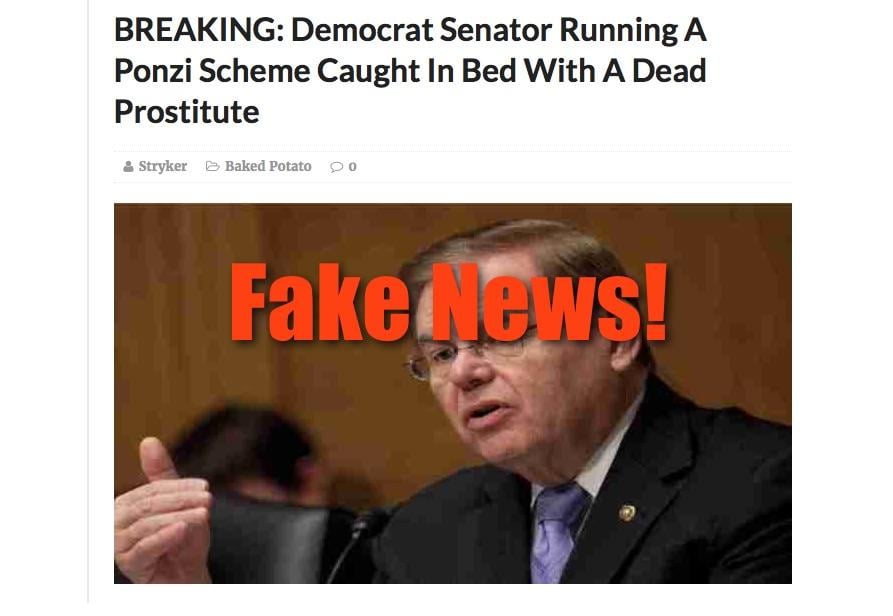 The fake scandal's villain is identified as Sen. Paul Staubber, purportedly a Delaware Democrat, but a quick check of the senate membership shows there is no such lawmaker. The photo used to illustrate the story is of an actual sitting member, U.S. Sen. Robert "Bob" Menendez, a Democrat from New Jersey. It begins with this:

Democrat Senator Paul Staubber (D-DE) was already in hot water and under investigation for running a Ponzi scheme when he was found asleep in a bed in a hotel in Atlantic City spooning a dead prostitute. The girl's death was ruled an overdose.

Staubber's office had little to say other than the senator is an adult, divorced man who is free to engage in consensual sex. They say the woman, identified as Candy Kane, 19, wouldn't have considered the senator a customer and never took a dime from him. Police who know her say she was never under suspicion for prostitution when she was seen with the senator.

The story was first posted on "The Resistance: The Last Line of Defense," which is a fake news website that carries following disclaimer on its about page: