An article titled "BREAKING: Atlanta Falcons Player Injures Knee While Kneeling For Anthem, Out For The Season" was posted on fake/satire website Freedum Junkshun this weekend. The story opened:

Oh, this is priceless! The Atlanta Falcons are now down a player not because of an injury he acquired at a game. This wasn't a normal "someone just got hurt playing football" scenario, either. Third-string quarterback Darnell Russell got a strong dose of karma as he dropped to one knee during the National Anthem.

Russell has only played one game this season, a game that the Falcons lost, but every single week he has joined the team in kneeling for the National Anthem - a protest against police for doing their jobs, our military, our flag, our Constitution, and our freedom. On Sunday when he "took a knee," something snapped. ESPN reports:

"Things were off to a tense start at Mercedes-Benz Stadium when Falcons reserve quarterback Darius Russell suddenly screamed in pain as the team knelt for the National Anthem protest. ..."

The entire story is false, there is no such ESPN report and no "Darnell Russell" or "Darius Russell" actually plays for the Atlanta Falcons. 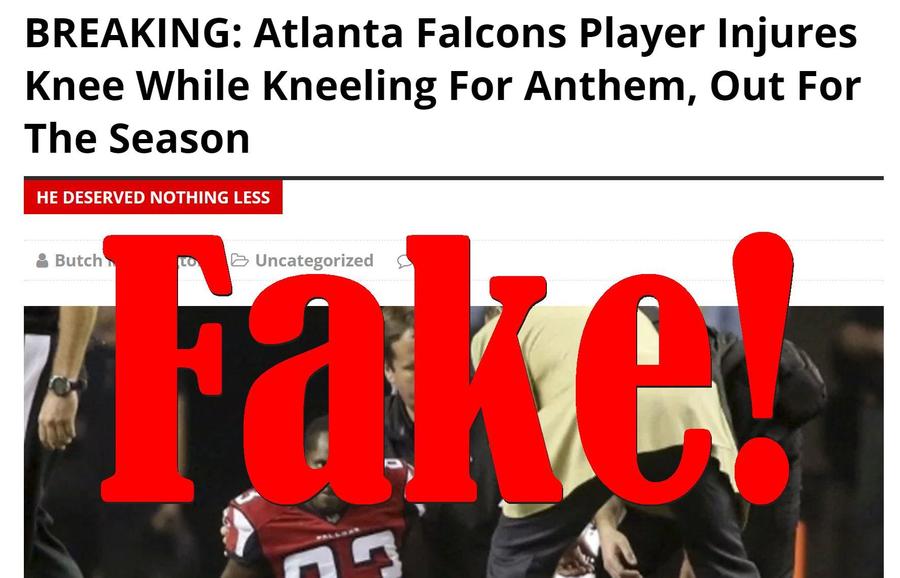 The image that went with the story depicts Falcons player Harry Douglas after getting injured during a game in 2014.

So don't make a fool out of yourself by sharing this article as if it were real (even though you might wish it was). You are just helping a liberal satire writer line his pockets. You may in fact be fine with that, in that case just go ahead and share the story anyway.