Cape Town | A Taiwanese millionaire has just fulfilled one of his lifelong dreams after a successful penis transplant from a South African organ donor.

Huy Xen Phang, a Taiwanese businessman who made his fortune in the real estate industry, had been waiting for 18 months before a suitable donor was found.

The penis transplantation is not only the fourth such surgery performed in the world but also the biggest known to date because of the enormous size of the penis in question.

"I am very proud of my big new penis, I don't care if people know about it, it will only make them jealous," Phang told reporters hours after the operation.

The story was accompanied by an image that actually showed Peter Lai, a UK software engineer who died aged 60 because of a lack of resources in the NHS. 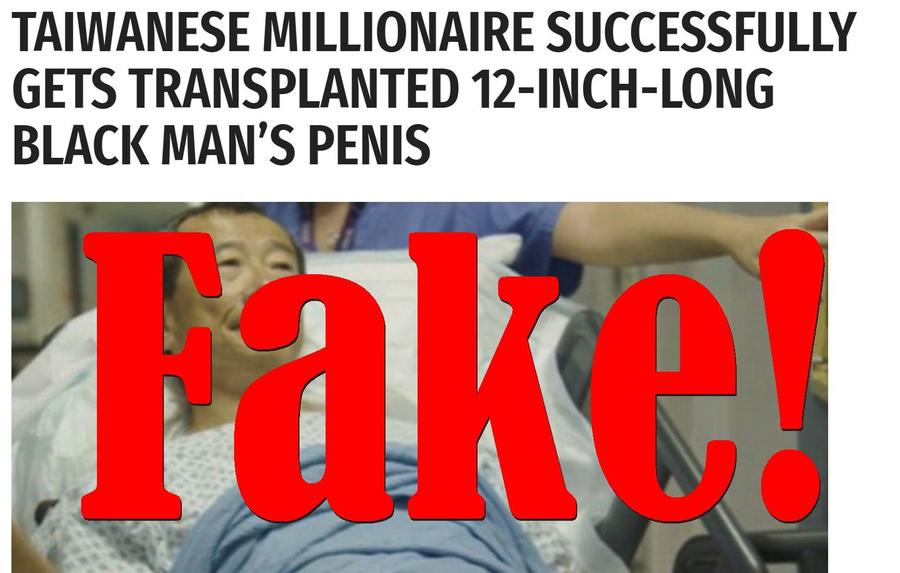 Surprisingly enough the doctor and hospital mentioned in the story (André van der Merwe from Tygerberg Hospital in South Africa) actually exist this time and he has conducted an actual penis transplant according to his Wikipedia entry:

André van der Merwe is a South African urologist. He is currently head of urology at the University of Stellenbosch and an associate professor at Tygerberg Hospital.[2][3] He is best known for conducting the world's first successful penis transplant in 2014.[3][4][5] He also performed the first laparoscopic kidney removal in South Africa.[6][7]

There is no record however of the supposed patient "Huy Xen Phang" actually existing and that is entirely logical since the website World News Daily Report is a well known satire website specialized in posting hoaxes and made up stories. The disclaimer on their website is pretty clear about that even though you have to scroll all the way down the page to find it:

So don't fall for this hoax if you see it online.