On Thursday, black Howard University cheerleaders showed how much they hate America by kneeling during the National Anthem, and they were joined by some special guests: four members of the Air Force R.O.T.C.

"We ask that you please rise as we honor the United States of America," the announcer said. This was the last thing that would be done to "honor" America on Thursday night.

The university's "Showtime" band played the Star Spangled Banner as the cheerleaders did this:

The R.O.T.C members joined the cheerleaders in kneeling, showing complete and utter disregard for the country they are supposed to be serving.

The image is real and was actually used in a New York Times article titled "Howard Cheerleaders Add Voices to the Anthem Debate by Taking a Knee". Notice the conspicuous absence of R.O.T.C. members in the picture: 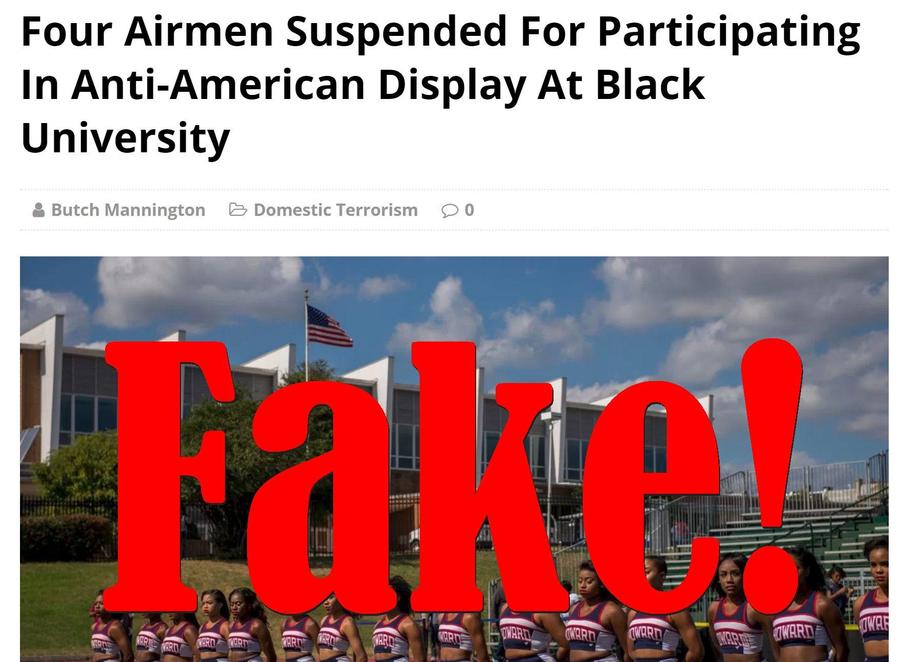 That NY Times article opened in nearly the same way:

WASHINGTON -- A few minutes before kickoff last Saturday at Howard University's Greene Stadium -- about two miles from the White House -- the public address announcer said, "We ask that you please rise as we honor the United States of America." At the 50-yard-line, four members of the Air Force R.O.T.C. presented the colors.

But when the university's "Showtime" marching band played "The Star-Spangled Banner," Howard's cheerleaders, who were lined up at one end zone, did not heed the request. They were kneeling.

There is no mention of R.O.T.C members taking a knee, on the opposite, they are described as presenting the colors.

In addition to that, Freedum Junkshun carries a satire disclaimer at the bottom of the page which reads:

If you see one of his stories on a site that does not contain a satire disclaimer, assume it is fake news. If you do see the satire disclaimer it is of course also fake news. And in this case, we are aware of several fake news websites which have already copied the story without mentioning that it came from a satire website. Don't make a fool of yourself, don't share it...