Famous fake/satire website As American As Apple Pie posted an article titled "Jason Aldean Gig Canceled After He Sells Out To Liberals On SNL" which opened:

Joining up with liberals to push gun control may not have been in country music star Jason Aldean's best interest.

During the show's opening moments, the guy who brought us "Dirt Road Anthem" and other tunes completely sold out his values when he said that "people should not own more than one gun" and blamed the Las Vegas tragedy on the NRA.

He then sang liberal Tom Petty's "Don't Back Down" as the crowd of liberals cheered and whooped and hollered like their grandpappy's latest batch of moonshine was done.

"So I want to say to them, 'We hurt for you, and we hurt with you.' But you can be sure that we're going to walk through these tough times together, every step of the way," Aldean said, punctuating his anti-gun message. "Because when America is at its best, our bond, and our spirit, it's unbreakable."

At the end of this statement, "he took a knee" as the house band played a few bars from the National Anthem.

The article was promptly copied by several fake news websites who obviously didn't do even basic fact checking. 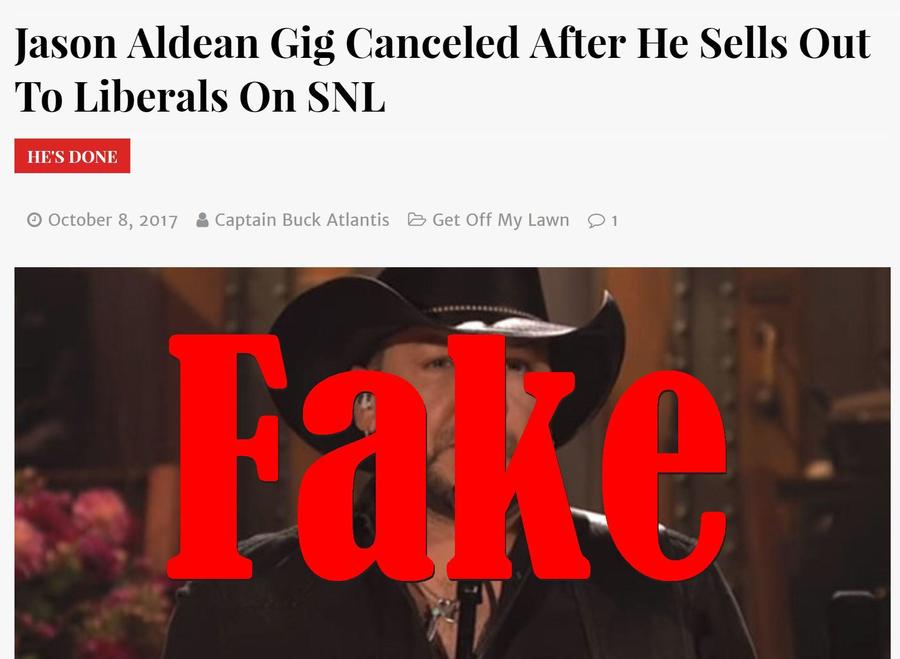 The part about Aldean singing "Don't Back Down" is accurate, as is the quote. But Aldean didn't take a knee and no anthem was played. You can verify that for yourself by watching the video below:

The article further claims Aldean's Birmingham concert was canceled but there is no trace of any such gig on his tour page. The supposedly very popular #BoycottJasonAldean hashtag barely has a few dozen tweets if you look it up.

Also, As American As Apple Pie carries a satire disclaimer at the bottom of the page which reads:

The owner and main writer of the site is self-professed liberal troll Christopher Blair, a man from Maine who has made it his full time job to troll gullible conservatives and Trump supporters into liking and sharing his articles. He runs several other websites such as asamericanasapplepie.org, ourlandofthefree.com and freedumjunkshun.com. Sometimes he is also known under his nickname "Busta Troll". He has at least one accomplice who writes under the pen name "Freedom", "Captain Jellypants" or "Captain Buck Atlantis" and who describes himself "as a patriot from Arizona who is sick and tired of the Left's socialist agenda for America" on the site.

The articles from Blair's site frequently get copied by "real" fake news sites who often omit the satire disclaimer and any other hints the stories are fake. Blair has tried to get these sites shut down in the past but new ones keep cropping up.