Fictional California senator "Joe Burkschmidt" was accused of being a KKK member by fake/satire website Freedum Junkshun in an article titled "BREAKING: Powerful CA Democrat Outed As Grand Wizard Of The KKK" that began:

Liberals laugh when we point out that Democrats are the party of the Ku Klux Klan, but yet another DemoKKKrat has been caught following in the footsteps of Hillary Clinton idol Robert Byrd.

While he never attained Byrd's rank of Exalted Cyclops, California Senator Joe Burkschmidt's white hood and robe just got yanked out of the closet by one of his own - a disgruntled staffer who posted a photo of the state senator on Facebook. The photo was removed within a minute:

There is no senator Joe Burkschmidt, not in California nor anywhere else, as a quick Google search will confirm. And the image used with the story is actually Bill Wilkinson, a real-life KKK Imperial Wizard who fled to Belize in 1984. 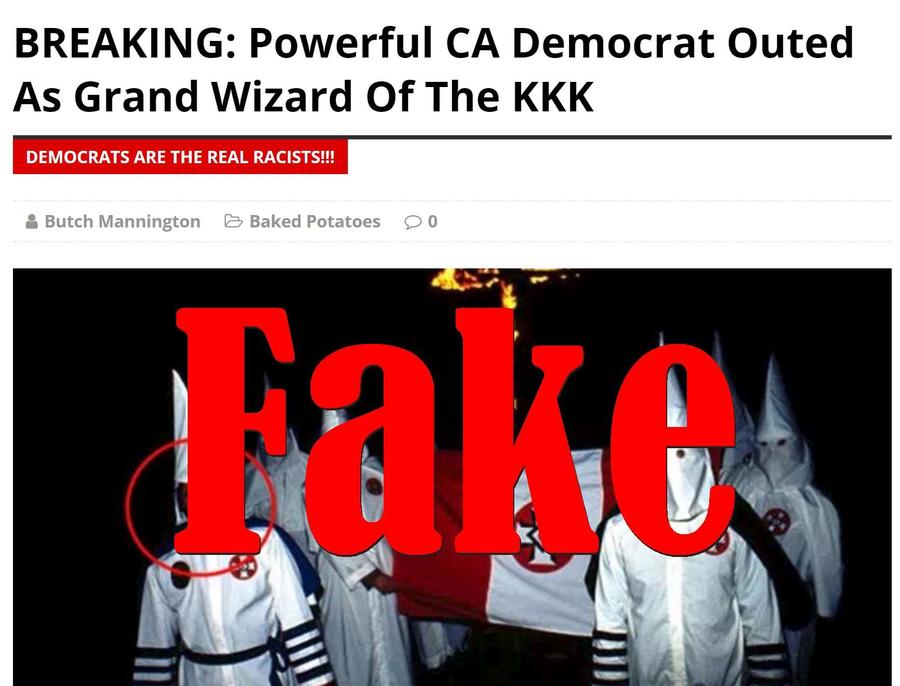 And in any case Freedum Junkshun carries an explicit satire disclaimer at the bottom of the page which reads:

The owner and main writer of the site is the well-known liberal troll Christopher Blair, a man from Maine who seems to have made it his full time job to troll conservatives and Trump supporters into liking and sharing his satirical articles. He runs several other websites such as asamericanasapplepie.org, ourlandofthefree.com and nunadisbereel.com. Sometimes he is also known under his nickname "Busta Troll". He has at least one other accomplice who writes under the pen names "Freedom", "Captain Jellypants", "Butch Mannington" or "Captain Buck Atlantis".

Articles from Blair's sites frequently get copied by "real" fake news sites who omit the satire disclaimer most of the time and who delete any other hints the stories are fake. Blair has tried to get these sites shut down in the past with some succes but new ones keep cropping up all the time.