For regular readers of Lead Stories Christopher Blair needs no more introduction. They can skip the next paragraph. Others are kindly invited to keep reading.

Blair is a self-professed liberal troll from Maine who has made it his full time job to troll gullible conservatives and Trump supporters into liking and sharing his articles, even though they are usually clearly marked as satirical in the website footer. He runs several websites such as nofakenews.online, reaganwasright.com and ladiesofliberty.com. Sometimes he is known under his nickname "Busta Troll". He has at least one accomplice who writes under the pen names "Freedom", "Captain Jellypants", "Butch Mannington" or "Captain Buck Atlantis".

Articles from Blair's sites frequently get copied by "real" fake news websites who often get more likes and shares out of them. Blair has been criticized by various fact checking websites for providing fake news sites with easy to copy fodder for their audience and helping the spread of fake news.

But there is another side to the story: sometimes the tendency of dodgy fake news websites to copy content from all over the place can be their downfall. In the past Blair managed to shut down several of these sites by sending out dozens of DMCA takedown requests. And it looks like he has a new target. The website conservativestamp.com recently copied several articles from Blair's sites, here are just a few that we debunked here:

These copied articles directly led to fierce criticism from mediamatters.org, who wrote an article about it titled "How one man's fake news websites are trying to undermine the Alabama Senate election".

It appears Blair has now hit the hosting company of the site with a DMCA takedown request and he has posted the resulting email on one of his Facebook pages:

So far the results seem limited with the site taking down a few articles but still persisting in stealing Blair's content but apparently in a slightly reworded manner hoping he won't notice. This has led to the most unintentionally hillarious fake news headline (archived) I've ever seen: 'BREAKING: Kneeling NFL Thug Presse Charges Against Disabled Veterinarian For "Assault"'. That title does not match the rest of the article at all: why would a veterinarian lose body parts to a rocket in Fallujah? And how do you "presse" charges? And is "Assault" really that different from 'Assault' in single quotes? 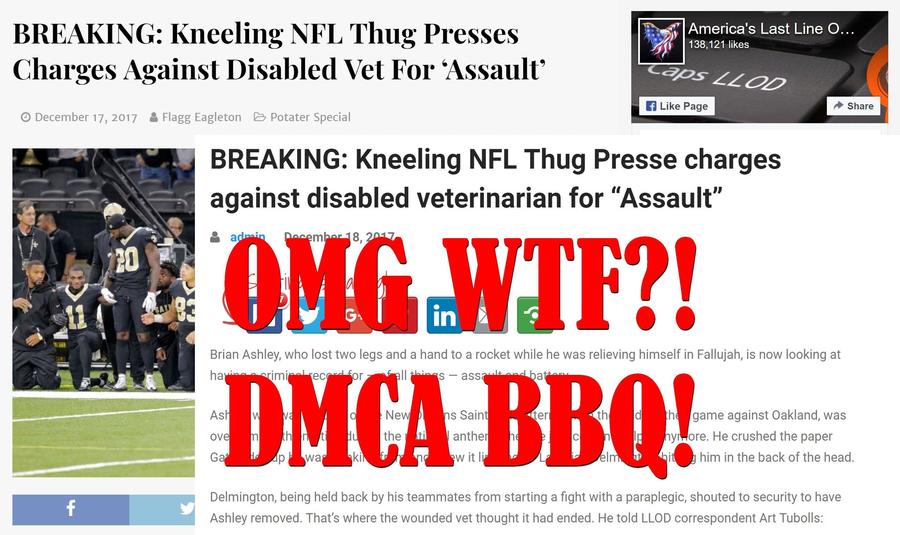 It is unclear at the time of writing if "Bliar" wants to "presse" additional DMCA charges against "Right Wing Postmark".