An article (archived here) from satire website Reagan Was Right titled "BREAKING: Black People In Birmingham Caught Voting Multiple Times With Fake IDs" was promptly stolen by a 'real' fake news site named Conservative Stamp (which was registered only a few weeks ago). The article opened:

The FEC has announced that it may have to recommend invalidating more than 60K votes from the Birmingham area to the Alabama Secretary of State. according to police logs, poll watchers and a watchdog group from the Heritage Foundation, dozens of people were caught voting multiple times with fake IDs and fake voter registrations.

The problem came to light as one poll watcher witnessed the same two men, who were obviously twins, return to the polls wearing different hats to vote at least four times. When confronted, the two men pushed their way through the crowd and ran.

It also contained a racist quote falsely attributed to a Breitbart news interview with a poll worker (but with the actual link going to a picture of donkey excrement on some grass):

"We were a little bit suspicious of some of the people coming in, but they had what looked like valid IDs. We checked their pictures and signatures and they seemed to match, but let's be honest...it can be hard to tell them apart."

The fake link was removed from the version at Conservative Stamp. 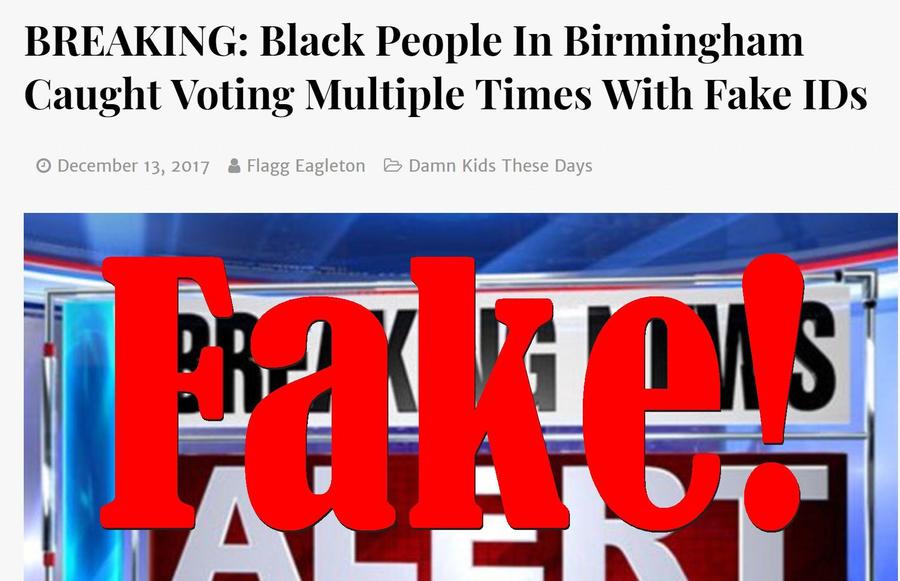 Reagan Was Right carries a satire disclaimer at the bottom of the page which reads:

Conservative Stamp had no such disclaimer besides a very general warning on their about page:

The owner and main writer of Reagan Was Right is self-professed liberal troll Christopher Blair, a man from Maine who has made it his full time job to troll gullible conservatives and Trump supporters into liking and sharing his articles. He runs several other websites such as asamericanasapplepie.org, ourlandofthefree.com and freedumjunkshun.com. Sometimes he is also known under his nickname "Busta Troll". He has at least one accomplice who writes under the pen names "Freedom", "Captain Jellypants", "Butch Mannington" or "Captain Buck Atlantis".