And here's the next fake/satire story copied (archive) by "real" fake news site Conservative Stamp: "BREAKING: Busload Of Blacks From 3 States Drove To Alabama To Vote Illegally". The article opened:

As you have probably heard, some blacks care so much about democracy that they openly planned to stack the vote against Roy Moore in Alabama by committing voter fraud on a massive scale.

A Reddit thread tells "African Americans in Mississippi" to "make a short trip to Alabama" and vote for Doug Jones. Well, that's apparently what happened according to State Election Integrity Board president Carl Williams.

The site that originally posted the story ("Potatiot Post") comes with a clear satire disclaimer at the bottom of each article:

It appears the story is an escalated version of an earlier fake story from the same network of sites about a "van full of illegals" also voting in the Alabama election. 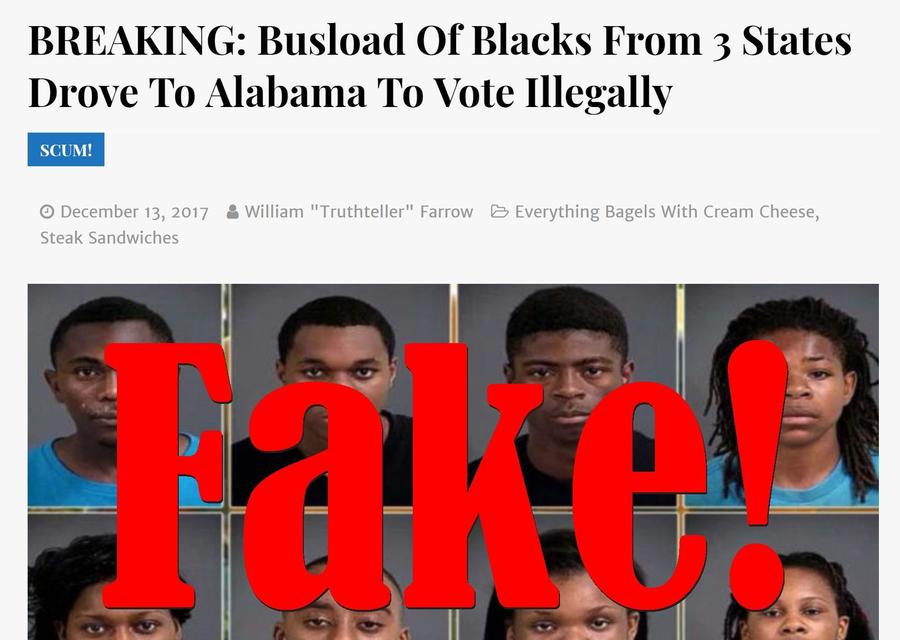 That didn't stop the writers of Conservative Stamp from copying the article completely while omitting any mention that it was meant as satire and completely ignoring the copyright notice. The site claims to have a DMCA policy but provides no contact information for anyone to leave a complaint.

At least one internet user got taken in by the story and copied "facts" from it into a racist rant posted to the newsgroup rec.arts.tv.

The owner and main writer of the Potatriot Post is self-professed liberal troll Christopher Blair, a man from Maine who has made it his full time job to troll gullible conservatives and Trump supporters into liking and sharing his articles. He runs several other websites such as asamericanasapplepie.org, ourlandofthefree.com and freedumjunkshun.com. Sometimes he is also known under his nickname "Busta Troll". He has at least one accomplice who writes under pen names like "Freedom", "Captain Jellypants", "Butch Mannington" or "Captain Buck Atlantis".

He has been criticized by several fact checking sites for sometimes using real names in fake stories and for providing easy to copy stories to "real" fake news sites. He responded to these criticism by posting following post on his Facebook page: