The ironically named fake news website nofakenews.online is up to its usual tricks with a story (archived here) titled "UPDATE: Van Full Of Illegals Caught Voting At Multiple Alabama Polling Locations" which opened:

The Democrat Party is up to their usual dirty tricks as Republican senate candidate Roy Moore fights against their cheating ways in an effort to become Alabama's next senator.

According to the Birmingham Press, polling officials caught what appears to be a "van full of illegals" who traveled to at least 7 polling locations with fake identification to vote for Moore's opponent Doug Jones.

"Law enforcement stopped the vehicle at Santa Recto Middle School in Wilmington as 13 Hispanic men were seen piling into a van after voting," the Santa Recto Observer reported Tuesday afternoon. "The same men were also seen in Smithfield, Birmingham, La Croix, and Mobile and were reported as suspicious by voting officials."

There is no "Santa Recto Middle School" and at least two thirds of the supposed countries the immigrants supposedly came from (Mexico, San Salmos, and Puerta Gorda) don't even exist. The entire story is false and appears to be a reworked copy of earlier stories about a van full of illegals voting (in different elections) on Reagan Was Right and The Last Line of Defense (now defunct, link goes to cached version). 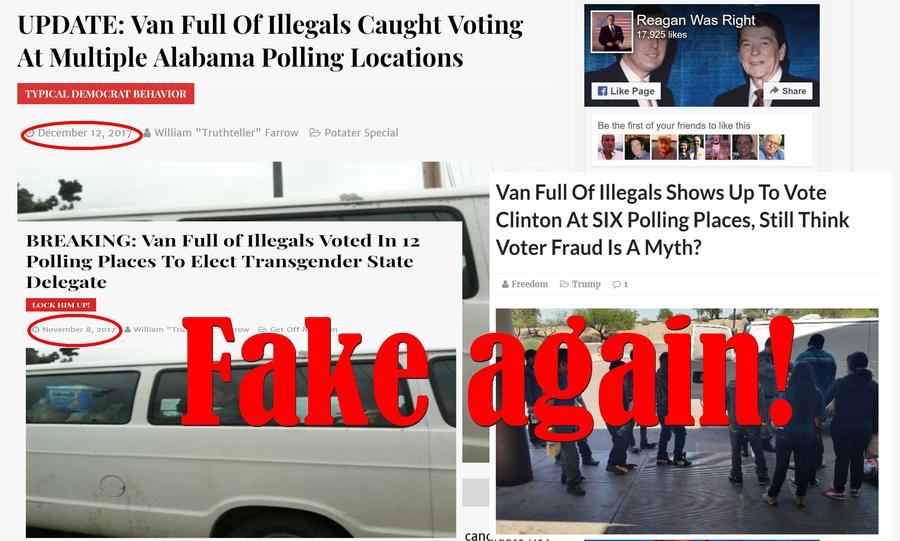 In addition to that the site nofakenews.online carries a satire disclaimer at the bottom of the page which reads: