Does a video show a huge spaceship hovering over Austin, Texas, and sending a light code? No, that's not true: The video stole the introduction for a local Austin,Texas, news report from January 24, 2017, and added a digitally created sequence purportedly showing several alien spacecraft hovering. There were no reported sightings in Austin on January 1, 2020, as claimed in the video description.

The claim originated from a video (archived here) where it was published by RED STONE on YouTube on January 2, 2020, under the title "A huge spaceship in Austin sends a light code". It opened with the clip from 2017 of FOX 7 Austin's anchor Mike Warren saying:

Alright, the X-Files theme should give you a clue on this next story (over the headline 'Possible UFO SIghtings').

Co-anchor Rebecca Thomas then says: 'Some Austin residents want to know if the truth really is out there. Last night, they reported video of what they think could be UFOs.'

Warren adds: 'And there are not alone. There are reports tonight that several people saw something in the sky over Texas.'

The Fox 7 site hosts an accompanying ariticle, also posted the next day, on January 24, 2017, that reads in part:

"I believe they were UFO's," says Rachel Jensen, witness.

Jensen says it was an impressive show in the sky over East Austin.

"By the time they actually got here, it's like they went up and then took off. The speed of them was so fast," says Jensen.

On Monday night her roommate noticed three lights coming at him. They were somewhat in a triangle formation. He called Jensen outside to check it out.

"Just as I stepped out, I looked to the sky and saw the triangle. Just as it was separating into three. Well there was one in the front and two behind it. They were bright orange, glowing, almost fiery," says Jensen.

At one point they saw a fourth light. They say it was moving back-and-forth erratically. Jensen made sure to grab her phone and capture as much of it on camera.

When it was over, she called Austin 311 to report it.

The American Meteor Society also received sighting reports Monday night. They say a fireball was seen by at least five people over Louisiana and Texas.

The newscast video of lights in the sky around 7 p.m. on January 23, 2017 (shot on a phone), however, looks nothing like that posted by RED STONE - footage appearing to show something hanging from the sky. Later in the faux video, lights start blinking on the supposed UFO as people speak over the footage.

And here is a photo attributed to Christopher Sherman, taken around the same time of phone footage from the newscast, of the "real" apparent sighting: 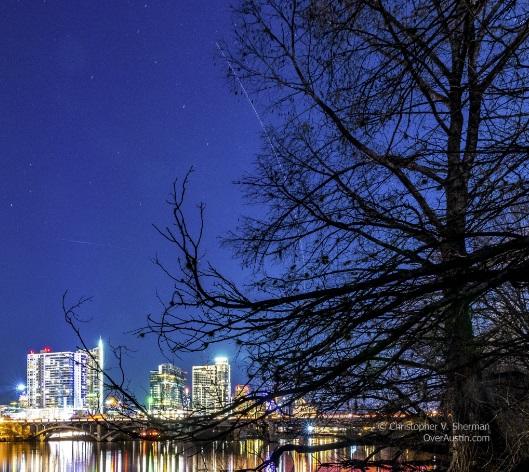 In short, nothing about this YouTube video is authentic: the newscast is old, and the footage is fabricated to fool people.

We wrote about youtu.be before, here are our most recent articles that mention the site: