Did the Vatican confirm Pope Francis and two of his aides tested postitive for coronavirus? No, that's not true: there has been no official Vatican communication that says this, and the site where the story appeared was registered anonymously just a few days ago. At the time of writing, the site appears to be down but links to the story (with the made-up headline) are still circulating on social media.

The Vatican has confirmed in a statement that Pope Francis and two of his aides have tested positive for the novel Coronavirus.
The three new cases add up to the over 400 cases confirmed in Italy under a week.
Pope Francis missed a planned Mass with clergy in Rome yesterday after showing Coronavirus-like symptoms.
The Vatican had earlier said the pontiff, 83, had a slight indisposition and could proceed with the rest of his planned work today. 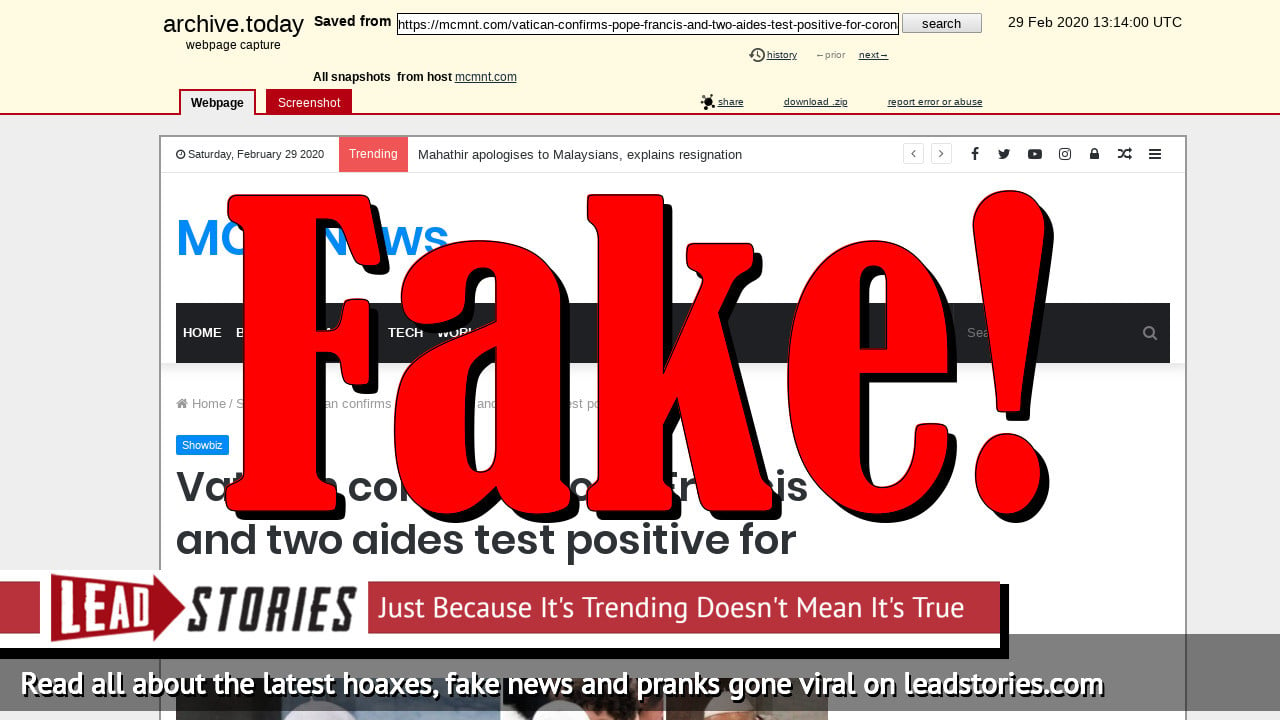 The Vatican has confirmed in a statement that Pope Francis and two of his aides have tested positive for the novel Coronavirus.

However the official website of the Press Office of the Vatican makes no mention of the claim at all. Neither does the "Pope" section of the offician Vatican News website. The Pontiff did limit his activities over the past few days due to an illness, but he has since resumed public appearances:

VATICAN CITY (Reuters) - Pope Francis on Sunday made his first public appearance in four days following what the Vatican has called a "slight indisposition" that forced him to cancel some audiences and activities. The 83-year-old Roman Catholic leader appeared at the window of the Vatican's Apostolic Palace to address thousands of people in St.

According to WHOIS data, the website mcmnt.com that was behind the hoax was only registered a few days ago:

The site carries no information about who is behind it on an "About" or "Contact" page, as Twitter user Cindy Otis remarked in this Twitter thread yesterday:

There's a fake news story circulating from a website called "MCM News" claiming the Pope has the #coronavirus. The domain was registered in 2016 by a domain squatter in China. The registration was changed three days ago on 26 Feb. pic.twitter.com/G6FLGEm9vg

4. Third, there's no "About Us" or similar kind of page on the website explaining who runs the site and no authors listed on the articles. The articles simply say "mcmpublisher".

Fourth, there are ~30 articles posted to the site in total.

When seeing incredible news online that appears to come from a website you've never seen before, it is generally a good idea to check the official websites first before sharing.