Is Mark Twain the person responsible for the now famous quote about politicians and diapers needing to be changed often and for the same reason? No, that's not true: There is no record of Mark Twain having written or said this quote. Many versions of the sentiment with similar construction have been recorded in print by various authors in the past century. More recently, the quote was popularized, identified as "an old phrase, basically anonymous" in a line in a 2006 movie, "Man of the Year," starring Robin Williams.

Memes bearing the image of Mark Twain paired with this quote began appearing on social media in 2011. One recent example is this June 18, 2021, Facebook post. The caption in the meme reads:

"POLITICIANS AND DIAPERS MUST BE CHANGED OFTEN, AND FOR THE SAME REASON." - MARK TWAIN

Versions of the quote may have small variations:

Politicians are a lot like diapers. They should be changed frequently, and for the same reasons.

Politicians are like diapers, they need to be changed often, and for the same reasons.

Politicians and diapers must be changed often, and for the same reason.

In the 2006 film, "Man of the Year" the character Tom Dobbs played by Robin Williams says this, but does not attempt to attribute it to a specific person.

The Center for Mark Twain Studies wrote an article about this quote on November 5, 2018:

While he might have appreciated the sentiment, it is pretty easy to determine that this is not something Twain actually said. Not only does the quote fail to appear in his published works, nor in his many accessible private writings, I can't even find an instance of Twain using the term diaper, except in a joke about the 'Royal Diaperer' in The Prince & The Pauper (1891). That he would only invoke the term in a novel which is, in part, a send-up of British aristocracy, is telling. The word diaper was not part of the common parlance of America during most of Twain's life. ... diaper did not supplant the nappy (or napkin) in American vocabulary until late in the 19th century, and did not achieve anything rivaling its widespread contemporary usage until the second half of the 20th.

Another article about the origins of this quote, from October 17, 2018, looks back to versions from the 1930s and 1940s. First Customs and then women were the subject instead of politicians, and socks or motor oil represented the thing that stinks or is in need of changing.

Mark Twain, the pen name of Samuel Langhorne Clemens, is not the only famous person who has had this quote attributed to them. Playwright George Bernard Shaw, Benjamin Franklin and Portuguese writer José Maria de Eça de Queirós (or Queiroz) are among those said to have said it. On Facebook, memes with a photo of Eça de Queirós and the quote in Portuguese appeared in 2009. The claim attributing the quote to Eça de Queirós was fact checked by observador.pt in the article, "Fact Check. Citação de Eça de Queiroz sobre 'políticos e fraldas' é verdadeira?" on December 13, 2020. 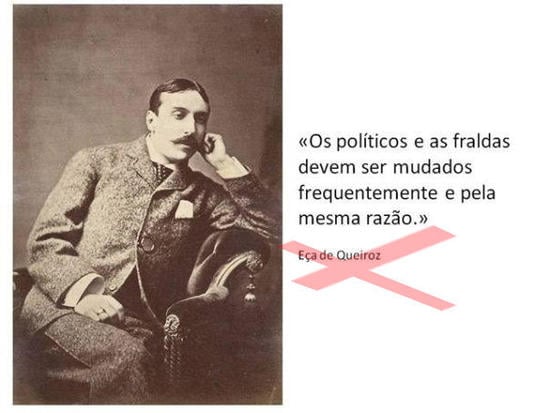